As we approach Christmas there are always a few movies on my must see list each year…It’s a Wonderful Life – to remind me that I am really pretty lucky. Holiday Inn to remind me how much I love to watch Fred Astaire dance, Bing Crosby sing and for the first use of Irving Berlin’s song White Christmas in a film. And, of course the 1954 Technicolor White Christmas to remind me of just how wonderful the big production Hollywood musicals could be…all of those wonderful costumes, fabulous sets and marvelous show tunes…

Imagine my surprise a few years ago when I learned that one of the major characters in this film, General Waverly,  was a Wabash man! 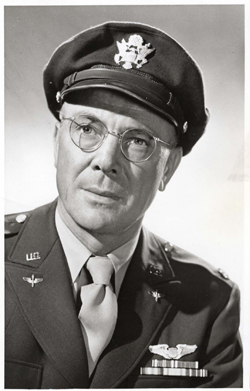 Dean Jagger was born in Lima, Ohio in 1903. He was raised on a farm not farm from Fort Wayne, Indiana. He graduated from high school at a very young age, attended a Normal School (teacher’s college) and was granted a license to teach students up to eighth grade.

At the age of 22, Jagger enrolled at Wabash where he joined the Lambda Chi Alpha fraternity. In 1927 Jagger heard about an acting school in Chicago and took off to follow his dreams. Jagger spent some time doing theater with a players group from Michigan, then landed in New York. In 1929 he made his first movie,  “Woman from Hell” at the Fox Studios,  which was the last silent picture made in Hollywood.

It was in the mid 30’s that Jagger hit his stride as a character actor. From 1934 to 1937 Jagger appeared in 20 movies, including one that would be a big hit with many of our students today, “Revolt of the Zombies“. In 1949 Jagger won the “Best Supporting Actor” Oscar for his role in “12 o’clock High” and in 1958 played Elvis Presley’s father in the movie “King Creole“.

All in all Jagger appeared in nearly 80 films and dozens of television shows as well. But it was his portrayal of Brigham Young in the bio pic of the same name that may have had the most impact on his personal life. When the movie premiered, the president of the Church of the Latter Day Saints praised Jagger for his portrayal of the Mormon leader. This began a friendship and in 1972 Jagger was baptized into the LDS church.  It was through this connection that Jagger’s papers and movie memorabilia went to the Lee Library at Brigham Young University.

So if you happen to catch “White Christmas” this year, look for the General…

We will be out of the office over the holidays, but rest assured, “I’m dreaming of a white Christmas…just like the ones I used to know…”

Merry Christmas and best wishes for the New Year!