Lew Wallace and the Elstons 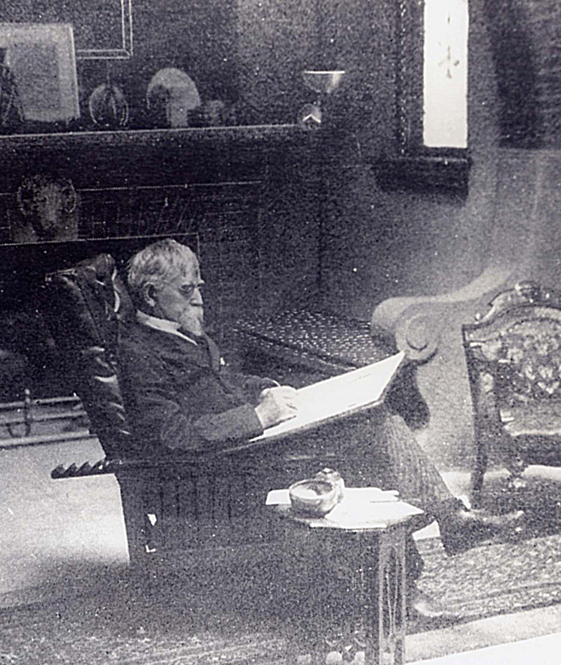 Aspromised, another post on Crawfordsville’s most famous author. This is an image of Lew Wallace in front of the fireplace of his new study here in town. At this point in his life, Lew was doing very well. He had made a mint off of his book “Ben Hur” and had made arrangements to have it made into a play – which also increased the revenues to the author.

But before this pleasant ending that we  see pictured, let’s take a deeper look at the life of this man. Although Lewis Wallace was the son of the governor of Indiana, there was little reason to suppose that he would, or even could, become a leader and a well to do man of business and letters.

Lew’s mother died when he was just a boy. At about this time, his older brother David went off to boarding school at the fledgling Wabash College. Lew describes himself as he first appeared in Crawfordsville, “My straw hat, being a production of the country, and ragged and rain-stained, hung to the back of my head as if there was a peg there…allowing my shocky hair the broadest liberty. My feet were bare and unwashed, and to make them more conspicuous, one of my great toes was garnished with a rag most unprofessionally applied. My trousers, rolled barely up to my knees, hung to my gaunt torso dependent upon a single suspender cloth…” In short he appeared as a ragamuffin. It was not long before Lew was sent home from Wabash, as he would be sent off from any number of schools in the future.  Finally, in exasperation, Lew’s father said, “Since your sixth year I have paid school bills for you; but one day you will regret the opportunities you have willfully thrown away. I am sorry, disappointed, mortified; so without shutting the door upon you, I am resolved that from today you must go out and earn your own livelihood. I will watch your course hopefully. ”

Lew’s father was not the only observer of his life that wondered if he would ever make anything out of himself. When Lew met Susan Elston at the home of her sister Joanna Elston Lane, he saw the love of his life. Over fifty years later Lew would clearly remember every detail of that evening and the lovely Miss Elston. Yet Susan’s family was more than a little skeptical that this young man would ever amount to much. In Lew they saw a hopeless romantic, a fellow who was not quite up to their standards of earthly ambition. The Elston family was, without a doubt, one of the richest in the state of Indiana. With investments in land, mills, railroads and banking, the Elstons were very well off indeed. Susan’s father was a tough old pioneer who had made his fortune by sheer hard work coupled with a cunning business sense.

Lew applied himself and was admitted to the practice of law in Indiana. He moved to Covington, the home of his youth, and opened his law office. Lew later said, “I cherished a wish to make my emergement from obscurity under the eyes, as it were, of the distrustful authority in Elston castle.”

It was a while in coming, but following the Civil War and his posting to New Mexico, as “Ben Hur” began to sell, Lew became more notable. While posted as ambassador to Turkey in the early 1880’s, Lew wrote home to his son with instructions to settle some debts in town. In the letter he cautioned his son, “You will not let anybody know more of my business than you can, especially Colonel Elston (Susan’s brother, now at the head of the Elston family businesses). I contemplate with great satisfaction the pains that will wrench his little pidgeon heart when he hears that all my debts are paid.”

In the end Lew Wallace’s life shines out to us across the ages. The author of the worldwide bestseller will long be remembered. I believe that by any measure, Wallace made a good life for himself, Susan and their son. Certainly he was successful in monetary terms and his Study lives on as a monument to that good life.