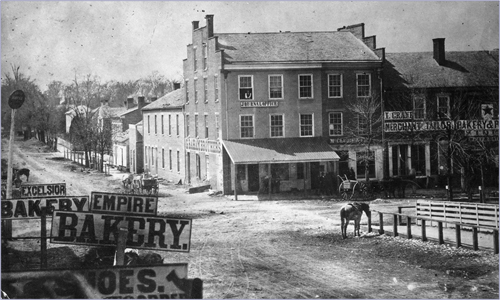 This photograph is of downtown Crawfordsville in the 1860s – at the intersection of Washington and Main Streets looking west. The building in the middle of the picture is the Hanna Building, the spot where Wabash held classes following the fire of 1838. (For more of that story, see the preceding entry.)

The next image is from the Atlas of 1864. It shows the growth of the town and of the campus. 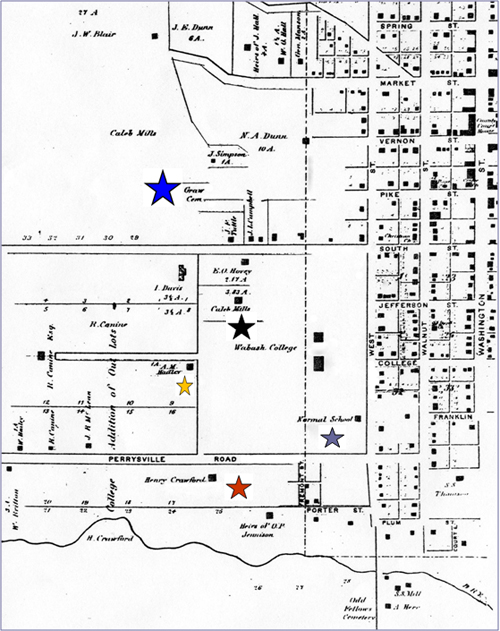 We can see in the lower right near the gray star that the building, now demolished, which was known as Kingery Hall and was at that time the Normal School – has arrived on campus.

The red star shows the new home of Henry Crawford a local merchant. This old house is now the home of the Lambda Chi fraternity. The land behind the home was known as Crawford’s Woods and used by students and townspeople for picnics and gatherings.

The gold star shows the new home of Mr. and Mrs. Atlas Minor Hadley. He was a member of the class of 1852 and the principal of the prep school. The house was purchased in the 1920s by George and Yvonne Kendall from Mrs. Hadley. The Kendalls greatly improved the home and later donated it to the college. This home is now known as the Kendall House. It sits in the nook created by the natatorium of the Allen Center.

The black star in the middle  of our 1864 atlas marks Forest Hall which was moved from its original location a few blocks north. Caleb Mills had purchased the original college building along with Williamson Dunn’s 15 acres of donated land for $1,050.

North of the campus, near the large blue star, we see the cemetery which was owned by Caleb Mills. In 1864 Pike Street ended at the original plat of the town with West Street which we now call Grant Avenue. This graveyard is shown on various maps as the Crawfordsville Cemetery, the Presbyterian Cemetery, the Mills Cemetery and the Town cemetery. Whatever it was called, it was here that the founders, early friends and faculty of Wabash College were buried.

In 1862 the Trustee minutes record that “Professor Mills made a generous offer to donate certain property to the trustees of the college, consisting of the Crawfordsville Cemetery and certain adjacent land, together with the building known as Forest Hall.” The Executive Committee later recommended that the Board of Trustees accept Mills’ offer of the old college building, with no further mention of Mills’ Cemetery or other land.

All of the land owned by Caleb Mills was sold by his heirs following his death. Indeed, most of the lots in the west end of town were a part of Mills’ holdings. The family kept the house on campus until the late 1920’s, at which time they gave it to the college as a home for their presidents.

The college, in 1864, was on its way to becoming the Wabash that we know today. The Civil War years were a trial to the college, yet Wabash held on and emerged stronger. Next time I will share a bit about the expansion of the Wabash College facilities in the 1870’s, a banner decade for “Dear Old Wabash.”