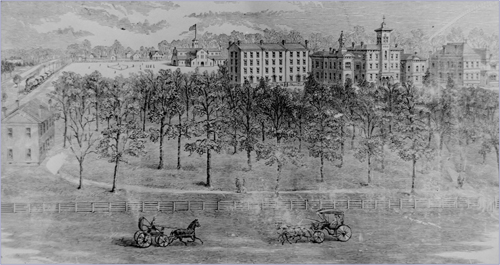 The decade of the 1870s is most marked by the many and vast changes to the campus. In this image, taken from the catalog of 1877-78 we can see that a great deal has changed. If we look at the upper left we can see that Athletics have truly arrived at Wabash with the coming of baseball. Right beside the ball field is the brand new Polytechnic Gymnasium. The college has sold the right-of-way to the railroad and life in Kingery will never be peaceful again. We also note that there are now wings on Center Hall. In the far right of the print, we can see Peck Hall, which was the first building built specifically to house the work of scientists.

One of the delights of my work is the chance that I have to really study old maps like this one. This is a part of the image for the City of Crawfordsville from the 1878 Illustrated Atlas, which gives us a really clear picture of the campus prior to Peck Hall.

We can see that on Caleb Mills’ land there are quite a number of trees. This shows us his famed apple orchard. He took his apples very seriously and his treat after a long day was a baked apple before bed. Lucky too, was the student invited to his study for a glass of fresh apple cider.

We should also note that the road which passed the Hovey and Mills houses was straight and named Mills Place. The walkway from the corner at Wabash and Grant has seemingly always been there. Clearly Wabash is growing.

The Polytechnic Gymnasium on the west side of campus was designed by Henry B. Carrington, who taught military history and engineering here in the 1870s. This building was designed as a place for students to exercise, learn the military arts and civil engineering. In addition the students were taught how to load and fire the lone cannon. As there was no money in the budget for livestock, students took turns being either artillerymen or mules. As you might imagine, this led to a good bit of grumbling on the part of the students.

On the map just below Center Hall, there is a rather large block labeled outhouses. Not to be indelicate, but there is a pretty good story about this area – known as “Little Egypt” – as retold by Dick Banta. It seems that these outhouses were roofless and much hated. So too was the military cannon. The students learned their artillery lessons well and late one evening loaded the cannon with, “a double charge of powder, horseshoes, scrap iron, nails and ferrous sundries.” I love that phrase, ferrous sundries…Anyway, they took aim and both the outhouses and the cannon were gone.

Next time I will share some more about the campus at this time…I hope that you are enjoying this series..I call it “A campus tour through time…”