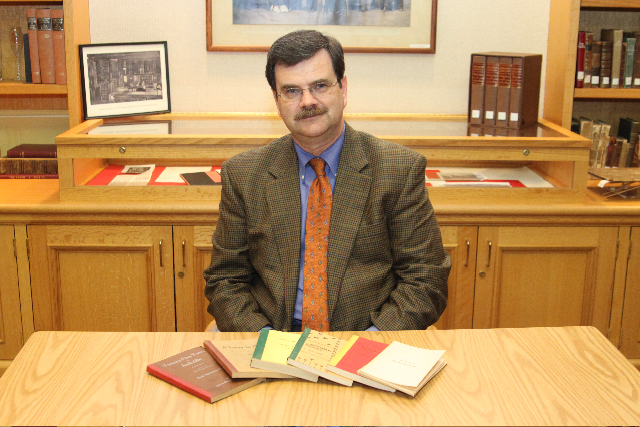 Many alumni still remember Elmore Day as a warm, sunny golden day in the fall when all classes were canceled and students were free to wander Shades or Turkey Run state parks or to go canoeing. Some hardy folks would stay on campus and listen to readings from the works of the Bard of Alamo – James Buchanan Elmore.  I believe “Sassafras, oh, sassafras” was a favorite selection.

Tom Wilson [W1977] professor of law at  Indiana University School of Law contacted me a few weeks ago about donating some of the Bard’s works to the Archives. It seems that while on break from college, Tom learned that one of his parent’s neighbors was a relative of James B. Elmore. Tom screwed up  his courage and knocked on the door.  The visit went well and Tom purchased five books and several copies of a genealogy for only $10.

Tom came to campus Friday of last week, a bone chilling day with a cold wind. Yet as I watched Tom and listened to Professor Don Herring read from a couple of the books – it didn’t seem quite as cold…Watching these two good friends sharing a laugh was just a delight. The verses were flowing – never mind the weather, it was Elmore Day! 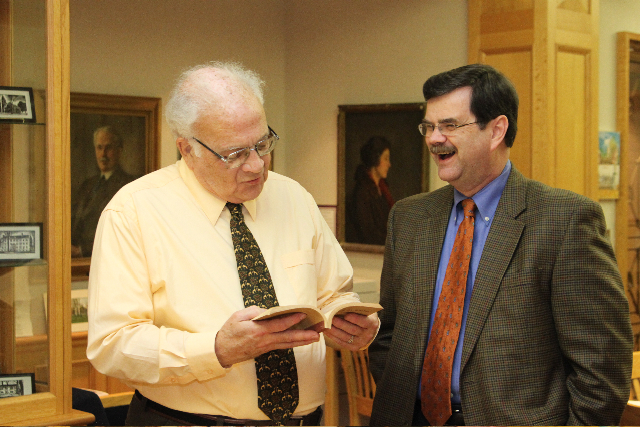 Among the items that Tom donated was a book published in 1959 by Elmore’s son, Albert, entitled Newspaper Clippings from James. B. Elmore’s Old Scrapbook. It is a fascinating collection of poems, newspaper stories and includes several pictures. In this book we are treated to story after story about the Bard of Alamo selling his books on the streets, lack of respect by the literati of the time, Elmore’s scorn for the poetry of “Jim Riley” – now revered as the poet Jame Whitcomb Riley. Really quite a little book. Tom’s gift will be kept safe here in the Archives and many thanks to him for thinking of the Archives. Who knew Elmore Day could happen in December?

The Great War
The Flying Dean