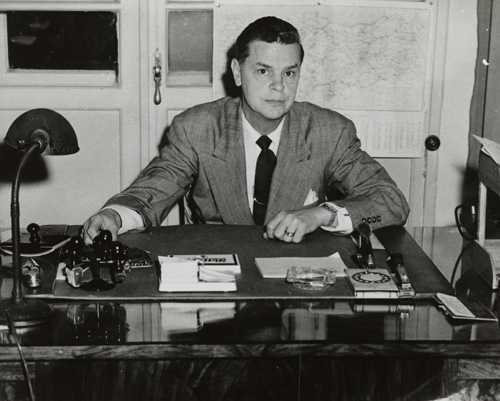 My family likes to tease me that I can connect Wabash men to anything, anywhere…While not exactly accurate, I am constantly surprised at the breadth of influence our alums have had and continue to have. So when my daughter called from Germany to say that she has enrolled in classes from the University of Maryland – I told her that she could do this because of the work of a Wabash man. She answered, “Of course, Mom!” Did I mention that my family hears this phrase a lot?

For decades hundreds of thousands of armed forces personnel and their families have been able to take college classes through the University of Maryland thanks to the vision and hard work of the man who came to be known as “the Flying Dean.” Ray Ehrensberger [W1929] was an incredibly gifted student who, like thousands of others before him, came to Wabash from Indianapolis. He pledged the Sigma Chi fraternity and again, like so many other Wabash students, Ray worked his way through college. In a pattern that would continue through his long life, he did what thousands of others have done – but in a totally different way. While most students found work around town, perhaps in restaurants, shops or doing odd jobs, Ray’s job was as a fireman on the Monon Railroad!

Ray made a big impression on campus and, although he studied history, it was in the Speech Department that Ray really soared. The Speech Department at Wabash in the 1920’s was headed by W. Norwood Brigance, a teacher of national repute. Ray came to be one of Briggie’s Boys, as the members of the speech and debate teams were known. As a junior in 1928 Ehrensberger won the state and the national oratorical contest.

Following graduation in 1929, Ray completed his master’s and doctorate degree and by 1932 he was the chair of the speech department at Franklin College.  A young man on his way up and in a big hurry. Ehrensberger went to the University of Maryland and just three years later was the chair of that speech department.  In 1950 Ray Ehrensberger was appointed the Director of the Overseas program.

While attending classes remotely is now so commonplace that a person can learn almost anywhere in the world this is a relatively new phenomenon. In 1950 soldiers who were stationed overseas were severely limited in their educational opportunities. It was through Ray’s work with the U of M that this changed. In a quote from the International Adult and Continuing Education Hall of Fame, “

He taught the University of Maryland’s first course offered on a military installation in 1946. He advanced to the position of Dean of the College of Special and Continuation Studies (CSCS) at the University of Maryland, recognized as a flagship institution in offering educational programs on military installations around the world.” He flew thousands of miles each year establishing classes and sites, attending graduations and organizing a worldwide program.

From a U of Maryland posting about Ray’s posthumous induction into the Hall of Fame,

“With his guidance, University of Maryland University College . . . became the first university to offer academic courses and degree programs taught on site at U.S. military bases abroad; the first to send its faculty to teach in a war zone (in Vietnam); and the first to confer bachelor’s degrees at U.S. military installations overseas. More than any other individual, Ray Ehrensberger was responsible for these remarkable developments and their success.”

This entry from the Wabash Magazine of 1970 gives us a better sense of the great work that Ray did over the course of a lifetime. 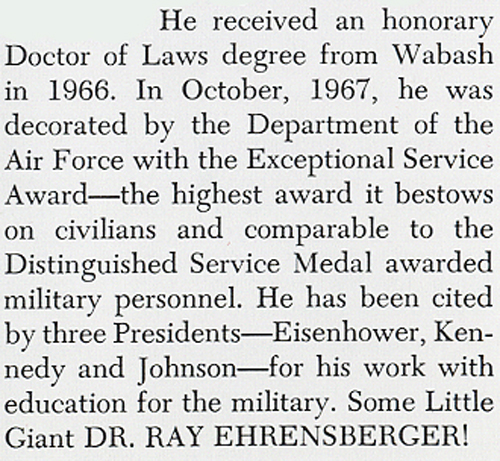 So when I hear my daughter tell me enthusiastically about the course offerings she has available in Germany, I smile and think what a great chance for her. As the Archivist of Wabash, I think of the hundreds of thousands of others who have benefited from this Wabash man’s pursuit of excellence and passion for education.