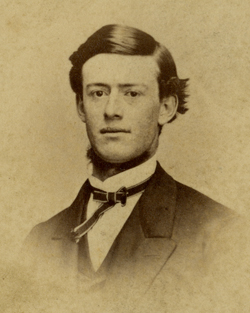 John J. Blinn was a Terre Haute boy of 16 when he arrived at Wabash to attend the Preparatory School in 1856. Student life at that time was fairly straightforward and consisted of lectures, recitations and studies. The spice was added by the two Literary Societies which held frequent intramural debates, John was a Lyceum man. There were, at that time, no organized athletics at Wabash. A pastime gaining in popularity across the country was the pursuit of the perfect drill team. Not far in time from the Mexican War, America was still in a military mindset and veterans were often prominent citizens. Locally, Lew Wallace was well known and had served in the Mexican War. Wallace put together a group known as the Montgomery Guards. Blinn learned the maneuvers from Wallace and formed the College Cadets.

John Blinn was a sharp, smart fellow and well liked by both his professors and his fellow students. He was a leader on campus and was elected the Captain of the new Cadets. This student group was evidently quite focused on their drills and Blinn was a good captain. The Cadets performed well wherever they marched and all who knew him liked him.

Blinn suffered some health problems and was advised to leave college for a bit and get some rest. While he was gone Ft. Sumter was fired upon and President Lincoln called for troops. Most of the Cadets enlisted immediately, a number of them with Lew Wallace’s 11th Indiana unit. Blinn was at an isolated farm, far from a telegraph office and did not get the news until a few days had passed. He returned to Terre Haute, bid his mother farewell and enlisted in the army. Because of the delay, Wallace’s group was full and Blinn joined the 14th Indiana, serving under Major William Harrow. That he served well and bravely as is evidenced by an unsolicited letter from his former commanders noting their esteem for him “as an officer and a gentleman, a true soldier, ever faithful and efficient.”

John was in many battles, including Antietam where in September of 1862 there were 23,000 soldiers listed as killed, missing or wounded in one day’s battle. He wrote a letter to his sister the night before this fateful encounter, “On the eve of a great battle I have sat down upon the ground, and with my saddle for a table to write a few words to the loved ones at home….” Blinn was wounded in the face and, as he wrote to his sister after the battle, was “sickened at heart” by his unit’s losses. He secured a medical discharge in October and returned to Wabash for the start of the Winter Term in January of 1863.

He was a student again, and Wabash welcomed him back with open arms. He would not stay for long as this letter from his mother to President Tuttle many years later tells us, “General Harrow wanted him on his staff & the country still needed soldiers so he enlisted the service as Assistant Adjutant General to Harrow in April 63.”

When the Army of the Potomac met Robert E. Lee’s troops at Gettysburg, Blinn was there. In this battle there were 51,000 men listed as killed, wounded or missing. John was shot in the thigh on July 3rd and wrote to his family from the Battlefield Hospital on the 4th –

“My dear Mother Brother & Sisters – Your soldier boy is wounded. But we whipped the enemy & the old flag is again victorious, glorious. My wound is a very serious one & I fear amputation may be necessary. I may die but – Mother! God give you strength & grace to bear the affliction.

My country called, I came to die upon her altar. God bless you & keep you. I can write no more.

His mother left immediately for Gettysburg, but found it rough going as so many railroads and bridges had been destroyed by the Confederate troops. She arrived on July 10th and stayed with her son in his hospital tent until he died on the 13th.

He was greatly mourned on campus and also in his hometown where the Terre Haute Daily Express offered these words, “Thou art gone from our midst gallant Blinn & the world seems drearier than before.” He was 22 years old.

I would like to add that Martha Brogan, a member of the Blinn family, has added to John’s story and, as a result of her work, I was able to paint a clearer picture of this intense young man and his service in the Civil War. I am delighted to have her additions to add to his file. Martha’s story of discovery is a real case study in family history research. If you would like to read more about Martha’s work in her family history, here is the citation to her writing: “Family Values:  Lessons in Material Culture,” Common-place. vol. 5, no. 3, Available online at: www.common-place.org/vol-05/no-03/brogan/index.shtml

College cadets
Lincoln in the Library