Lincoln in the Library

With 2009 as the Bicentennial of Abraham Lincoln, it seems that everywhere we turn there is another Lincoln event! Not to let a chance to highlight our collection slip by, we are hosting an exhibit entitled, “Lincoln in the Library”. This display features some items from collections in the Lilly Library and in the Special Collections of the Archives. 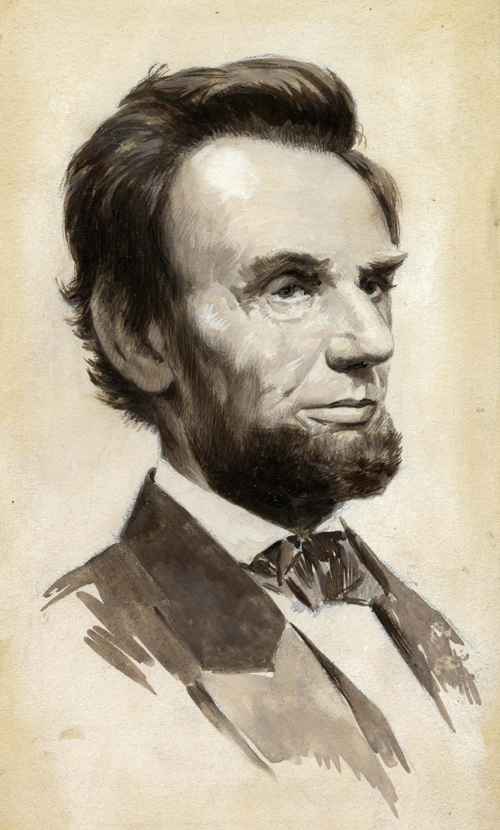 Among the great things that we have are this illustration by Walter Goater. It says on the back that Goater knew Lincoln. A little research shows that Goater was an illustrator of that era and was from Illinois. His work appeared in Frank Leslie’s Illustrated Newspaper, a popular periodical. Several of his sketches were printed in the Volunteer Soldier of America a book by General John A. Logan. The image is so stunning that we have used it for all of our posters.

We also have a book by Ward Lamon, Lincoln’s good friend and bodyguard which offers rich detail on Lincoln’s life and work.

We have a report from the Pinkertons about Lincoln’s trip to Washington and the threats to the President’s life. Pinkerton, best known for his famous detective agency, during the war worked for the government as a special “secret service”. His work was to catch counterfeiters and protect the president. Just what our modern Secret Service does today.

A book by Elizabeth Keckley is a real treasure and one of my favorites. Keckley was a black seamstress with a substantial D.C. clientele. She had worked very closely with Mrs. Jefferson Davis before that lady left to become the First Lady of the Confederacy. Keckley created Mary Todd Lincoln’s inaugural gown and, based on that excellent work, became Mrs. Lincoln’s friend, constant companion and dressmaker. This memoir was written shortly after the Civil War and intended as a defense of Mrs. Lincoln who was under intense, and mostly negative, scrutiny at that time. The book was reviled and it is said that Robert Todd Lincoln had it pulled and all available copies destroyed.

Another book of interest is a facsimile of “Lincoln’s Own Book”. It is a very small memo type of book into which Lincoln himself pasted copies of all of his speeches. It was for the use of a friend who was working on his campaign so that he might get Lincoln’s very carefully chosen words just right. We also have booklets that were created for the presidential campaigns of 1860 and 1864.

Most of what is on display comes from the Howell Collection of Lincolniana. This display is the culmination of several weeks of work here in the Archives. Ginny Maharry and I have really had quite an immersion experience and never even left home!

To see more of what we have planned for this celebration…visit the Lilly Library home page here…http://www.wabash.edu/library/