This aerial picture is from the 1950’s. I love it because it shows us Mud Hollow so very clearly. Mud Hollow was Wabash’s version of a veteran’s village to accommodate the men who attended Wabash with their families. It was also home to very new, very young faculty members at times including Vic and Marian Powell and Lew and Mary Ann Salter.

For reference, this image was taken from a plane flying over the Chapel. The top of the photo is south and the line through the middle is the Big Four Railroad. As we can see the baseball field was where we now have parking for the Allen Center.  The Lambda Chi house is hidden by the trees. The circle at the upper right of this photo is the Sycamore Hills addition as it is just being developed. 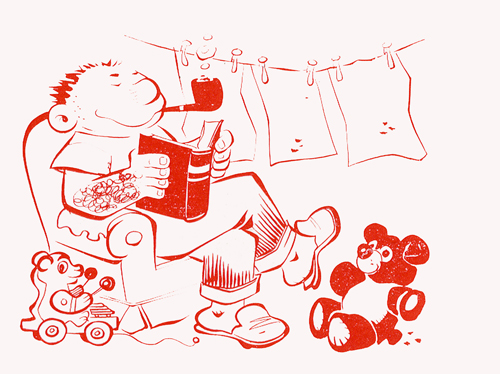 This image is one of a series of brilliant cartoons created by Don Cole [W1952] for the 1956 yearbook. This is the original Wally Wabash in his new role as a resident of Mud Hollow. 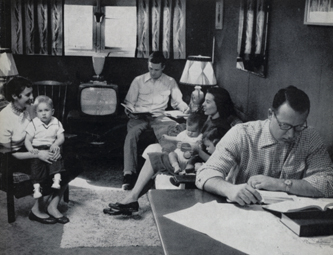 Here is a photo of a couple of real Wallys as they study. The caption notes that these are the Chuck Preston and Pete Hodges families, again this image is from the 1956 yearbook.

“Fifteen government housing units, each containing two apartments, 20×27 feet providing accommodations for thirty married veterans, are being erected on Jennison Street opposite the football field,” according to a statement by W. B. Guthrie, Director of Housing for the college.

Each apartment is to be of metal type construction, insulated, and is to include a living room, two bedrooms, a kitchenette and a bath. Separate entrances, heating and cooking units, oil heat, electricity and water are furnished with each apartment.

The basic rental is $27.50 per month including light and water fees. In addition, the government charges $6.00 per month for the use of furniture.

A notable feature of the housing was a raised walkway to keep the tenants out of the mud, so ubuiqitous that the area was pretty quickly nicknamed Mud Hollow. The name stuck and was recognized by the college with a bronze plaque erected on the site which was unveiled by President Thad Seymour.