Ward Lambert [W1911] ranks high in any listing of Wabash men in sport more than 50 years after his death in 1958. Ward was born in Deadwood, SD but raised in Crawfordsville. It was here in town that he earned the nickname “Piggy” for the pigtail on his sledding hat. Piggy was always small, it is said that when he played football, basketball and baseball for 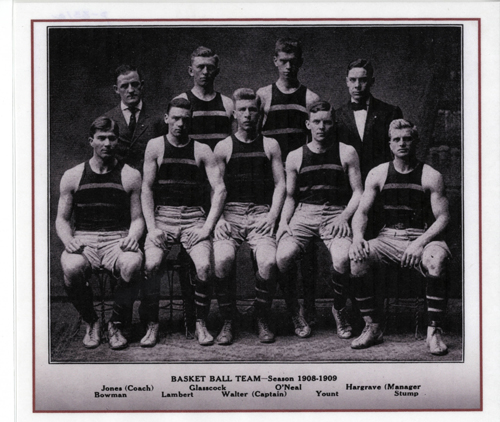 Lambert is second from the left on the front row.

Wabash he only weighed 114 pounds. Living in Crawfordsville and hanging out at the old YMCA brought this boy into early contact with the game that would occupy the remainder of his life. Crawfordsville was one of the earliest YMCAs to institute basketball. The local “Y” director brought the game directly from James Naismith, the inventor, and the story goes that as a young boy, Piggy’s job was to knock the ball back out of the peach basket.

At Crawfordsville High School, Piggy, though small, played a tough game of basketball and ended his high school career as a top scorer on the team.  Ward then came to Wabash College where he was a chemistry major and a member of the Delta Tau Delta fraternity. He also played on the football, basketball and baseball teams while a student. Known for his feisty approach to basketball, Piggy was named the assistant coach in his senior year in college. Following graduation in 1911, Ward went to the University of Minnesota to further his study of chemistry. As so many graduate students are, he was hard pressed financially and so returned to Indiana where he accepted a job at Lebanon High School. While there he taught chemistry and physics and coached basketball for four years.

In 1916 Lambert was called to Purdue to serve as head basketball coach. Lambert’s Lebanon teams had posted an impressive record and perhaps even more important, the coach leaving Purdue was Piggy’s old CHS team member, Robert “Pete” Vaughan. Pete left Purdue to join the military and, after WWI, Pete Vaughan returned to Crawfordsville to coach the Little Giants in basketball. Ward too served in WWI as a lieutenant in the field artillery in France. He made it home in time to coach the Boilermakers in their 1919 basketball season.

At Purdue, Piggy had an astounding record in basketball with 11 Big Ten titles won outright or shared. Lambert perfected the fast break and was known for his ability to take boys of indifferent potential and grow them into amazing players. In a January 1941 Esquire magazine article, Lamberton shared his philosophy, “You must create respect in boys but never fear…Impress upon your players their own capabilities. Don’t allow them to be affected by the success the opponent may be enjoying.

“Make yourself good and don’t worry about the other fellow. You can’t do more than play your best but if you permit the other fellow’s good breaks to worry you, you destroy your own capabilities.”

Perhaps Piggy’s greatest legacy was that of a player turned coach, John Wooden. A powerfully successful coach at UCLA, Wooden was another Hoosier boy. He played four years at Purdue under Piggy and was the captain of Purdue’s 1932 national championship team. Coach Wooden was often quoted as saying that the single most important coaching influence on him was Coach Lambert.

Piggy was fiercely competitive and yet as proud as he was of Purdue, I was delighted to read this last week from the Wabash Record-Bulletin of 11/30/1922, “Piggy Lambert went to the Butler [football] game to scout Wabash for Purdue, but before the first quarter was over he forgot scouting, succumbed to the excitement of the game, and from then until the finish there was no harder rooter for the Scarlet in the Wabash stands.” Like so many Little Giants still today!