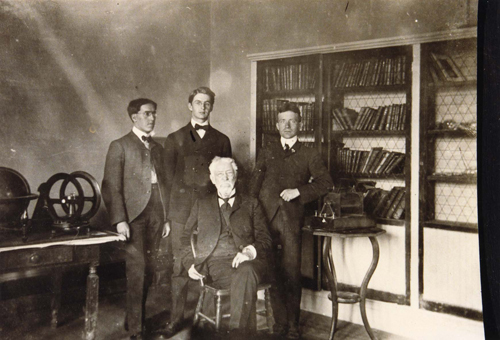 Here is a listing of the fifteen longest serving members of the faculty as created by David Phillips, retired professor of chemistry. David has done a great deal of research on this and many other subjects here in the Archives.

You may note that there are several  men in the 43 year category, including David Hadley who is set to retire at the end of this year. There are also several teachers who hit the 40 year mark, but only one man made it 55 years, John Lyle Campbell [W1848]. Campbell is a full ten years ahead of the nearest tenure, that being Paul McKinney [W1952]. I think it is interesting that the two longest serving faculty members are both Wabash men.  The picture above is of Campbell and three of his students.  Campbell had a robust career and spent a great deal of time and energy in off-campus pursuits as well.  Here is a link to a previous blog posting about some of Campbell’s work…

Enjoy!
Beth Swift
Archivist
Wabash College
A blast from the past…
Piggy Lambert and a passion for sport