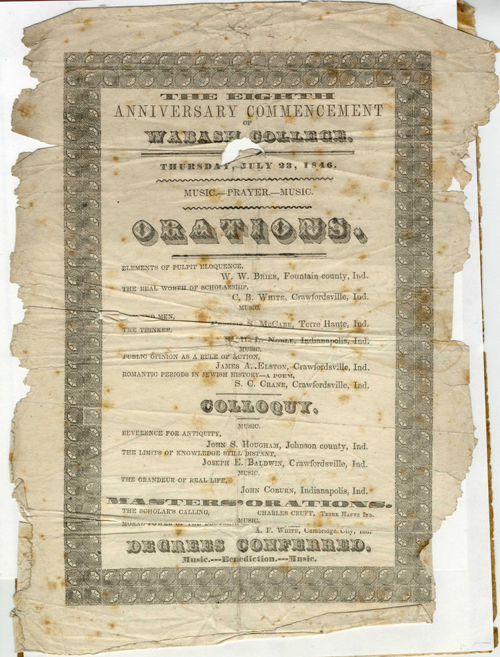 A couple of years ago we did an exhibit on Commencement at Wabash and we used this scan of the program for the commencement of 1846. As you can see, Commencement in 1846 was held on July 23. What a change, today’s seniors are out of here by mid-May!

Student fees were very different at that time as well. Again from the catalog, in 1846 a student in the collegiate department was charged $8 in tuition per term ($24 per year). They could rent a room in the dormitory (the building we call South Hall, where Baxter Hall sits now) for $3 per term and they could expect “incidentals” of $1 for a grand total of $36 per year.

The catalog continues with this next bit of information to prospective students, “The use of the Library is optional with the students. The charge for this is twenty-five cents per term. Board in private families per week from $1 to $1 25. Wood and lights, estimated per year, $3. Washing per dozen, 50 cents. Text-books in the Collegiate course, when procured from the Library, cost about $2 per year.” In summary, a collegiate student would expect to pay $86 00 for a three term year at Wabash.

If money was no object another option was presented, “Lads, whose parents or guardians prefer, can be accommodated in the Professors’ and a few other families, where parental care will be taken of then, with board, room, lights, and washing, per week $1 75 – per year $70 00.” Including tuition this would bring room, board and tuition to $94 per year.

In further description of student life, “The rooms in the College edifice are furnished with Franklin stoves, chairs, tables, and bedsteads. beds, bedding, and other furniture, the student will procure as may best suit his convenience. Every study-room has connected with it two bed-rooms, so that each student has a separate sleeping room. the bedsteads are designed for single beds or mattresses. Each suit of study and bed-rooms can be thoroughly ventilated.” Similar to the suite of today’s modern dorms, two students would have rooms either side of a middle study room.

“Students occupying rooms in the College edifice may very conveniently board themselves at a trifling expense. Several young men have done it during the last year, and reduced the cost of board to less than fifty cents per week. Others have associated themselves, purchased their provisions, and hired a matron to spread their table, and in this way have obtained their board at seventy-five cents per week.”

This description of student life from 165 years ago is fascinating and surely all of the practices of that era are now history. Or are they? I looked over the list of speakers at the commencement and noted that there were the regular student speakers (we still have only students speak at commencement) and there was also a section labeled , “Colloquy” which featured alums of the college. Here is a closeup of that section…

The three men who spoke at that commencement are notable figures in the history of Wabash. John S. Hougham was teaching at Franklin College, making scientific instruments on the side for additional money and would be the first president of a very young Purdue in a few years. Joseph Baldwin was the son of our beloved first president who died in service to this little college. John Coburn is a name known to generations of men who are brothers in the Beta Theta Pi fraternity as its founder. A pretty sharp group of alums that gathered in 1846. This is a tradition that lives on all these years later, although now at the Big Bash alumni weekend. A real highlight of the gathering is the alumni presentations over the weekend on topics as varied as forensic science and the brewing of a fine beer.

So once again, I note that there is a great deal in the life of a small college that, though couched in different terms or updated with technology, remains the same. Colloquy lives on at Wabash every summer.

An Earthy Treasure
The magic of primary sources…