Giants in those days 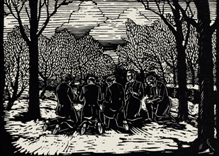 The previous post was a salute to a scientist and a poet…this posting continues with Collett’s words on our founding on November 21, 1832…

“At an early date in the settlement of the west, when the pioneer had just entered the wild forests, still occupied by wilder savages, a band of young missionaries, hopeful for the future of this region, and foreseeing its moral and educational needs, determined to found a school for collegiate education. Like knights of chivalry or standard bearers of a forlorn hope, they laid their plans, staked off the grounds, and kneeling on the snow that frosty November morning, consecrated themselves to the enterprise, and it to the God of Heaven. The vow then taken, with the enthusiasm of young manhood, has been fulfilled with single devotion and untiring energy. Its founders taught and worked on a salary of six hundred dollars a year, but with the spirit of martyrs they returned one half to the treasury of the college, gave one hundred dollars to other charities, and reserved only the meager sum of two hundred dollars from which to feed and clothe themselves and families. In determination and self-denial “there were giants in those days.”

The drawing posted above was used in the centennial publication, Wabash College – The First Hundred Years to illustrate the chapter on the founding. For more on these good men – in particular Edmund Otis Hovey – I would point you to Emeritus Professor of Chemistry Dr. David Phillips good chapel talk entitled, “In the beginning, there was Hovey.” It may be found here   http://www.youtube.com/watch?v=so5eN1SFrBc&feature=plcp

Thanks again to Nate Mullendore for sharing this great old report.

Collett – A scientist and a poet
Shiloh…bloody Shiloh