Wabash to West Point to War… 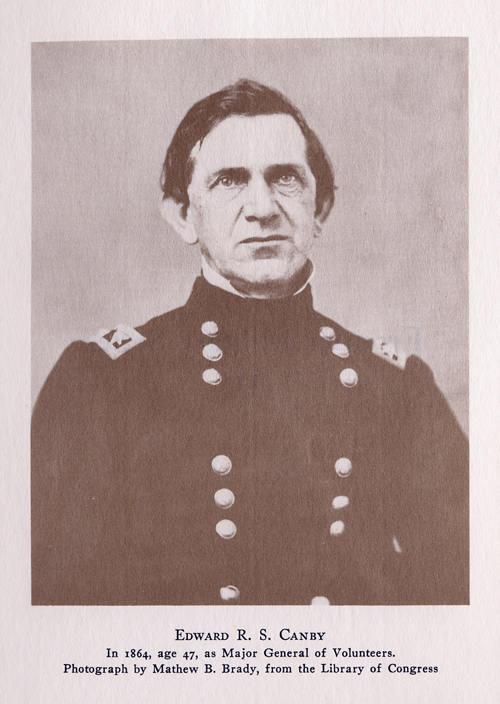 Image from the book Prudent Soldier about Canby by Max L. Heyman, Jr.

As a college for men, I suppose it is not too surprising that a number of our students have gone on to attend West Point. Among the men who have made this journey is Edward Richard Spriggs Canby – or, as he is more widely known, E.R.S. Canby.

Canby was born in Kentucky and, in 1829, moved with his family to Crawfordsville. His father, Dr. Israel Canby, was appointed as Receiver of Public Lands. By May of 1834, young Edward was enrolled at Wabash. He attended for four terms before receiving his appointment to West Point. His brother, Charles, is also an alum of Wabash.

Edward’s record at West Point did not indicate that this young soldier would amount to a great deal militarily. He finished next to last in his class at West Point, was commissioned a second lieutenant and sent off to Florida for the wars with the Seminoles.

In  the Mexican-American War Canby was promoted and by 1849 he was a major on his way to Monterey, California to serve as adjutant-general of the California Department. By the start of the Civil War, Canby was in New Mexico. It was a tough time in the army as many who had served together now found themselves on opposite sides of the war. Canby’s commanding officer – Henry Sibley, who was also his brother-in-law – had left New Mexico and gone to Richmond, Virginia to offer his services to the Confederate States of America. This offer was accepted and General Sibley returned to New Mexico to face young Canby, now in charge of the defense of the territory. Although Sibley won more battles, Canby’s strategy proved successful. The Confederate troops were denied supplies and were unpopular with local residents.

Following the big battle of Glorietta Pass in 1862, in which Canby’s administrative gifts were key to the success of the northern troops, the Canbys were on their way back East. Canby served in various administrative positions including time in the War Department under Edwin Stanton. Among the tasks assigned was to bring order to New York in the wake of the draft riots in the city. This he did and was rewarded with a field command as Commander of the Division of West Mississippi.

His goal was to re-take the last Rebel port on the Gulf – Mobile, Alabama. Working with Admiral Farragut, Mobile was taken. On April 12, 1865 the Rebels in Mobile surrendered. Canby was ordered west in time to receive the last surrender of an army in the war by General E.K. Smith.

Canby then worked in the reconstruction of the South, but his leniency with southerners was a problem. Canby was ordered back to Washington, D.C. where he served until the late 1860’s, when he volunteered to return to the West.

Ulysses Grant sent Canby to the Department of the Columbia – which included Oregon, Washington and Alaska – to help with troubles between the Modoc natives and the settlers in the area. By 1872 the term used was “Modoc War”. From what I gather, Canby was a well respected officer. In April of 1873 Canby was working to establish a peace in the area. He arranged a peace conference with the Modocs and to show his good faith attended unarmed. It was at this conference on April 11th that General Canby and the other members of his peace party were killed. His body was shipped back to Indiana and he was buried in Crown Hill Cemetery in Indianapolis.

E.R.S. Canby’s story is one of hard work, diligence, earnestness and timing. He was very often in the right place at the right time and history records his life as that of a hero. To more fully understand the issues surrounding the Modoc War, I would recommend this site from the National Park Service for the Lava Beds National Monument, http://www.nps.gov/labe