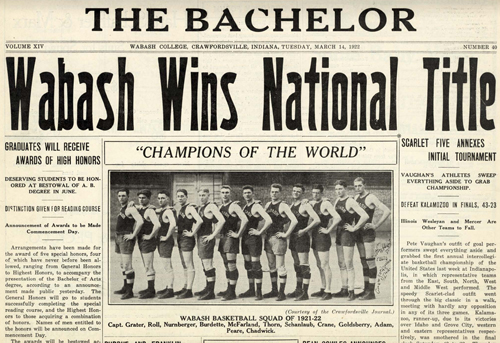 Among the players on this great Wonder Five were Pete Thorn (16 letter athlete and winner of the John Maurice Butler Prize for academics), Alonzo Goldsberry (who would later coach at Wabash) and the tallest of them all at the far right of this team picture – Maurice “Shang” Chadwick – the namesake of our gymnasium. Shang funded the 1969 renovation.

Here is a little snippet telling about the dedication of the gym – at a home game with Butler!… From Some Little Giants by Max Servies, “The decade [1970’s] opened with the dedication of Chadwick Court on February 9, at half‑time of the Butler game…a complete remodeling job on the fieldhouse portion of the gym.  It included a new roof, new lighting, completely refinished floor, new scoreboards and newly painted exterior and interior.”