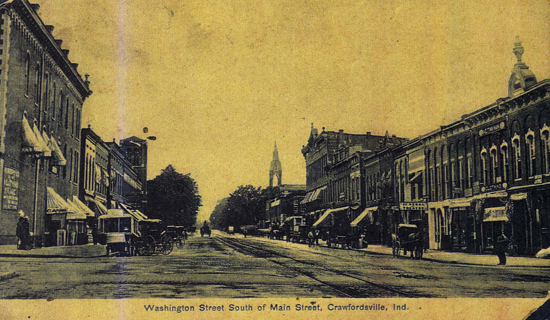 A few months ago I posted a picture of East Main Street. As a follow up, here is an image of our downtown taken in the middle of Washington Street and looking south. In this photo we get a sense of Crawfordsville as a bustling county seat.

In the furthest point visible on the right side of the photograph is the Wabash Avenue Presbyterian Church steeple. On the left side and back is the St. Bernard’s Catholic Church bell tower. The Catholic Church had a lovely cathedral on the corner of Pike and Washington Streets. It was demolished and a bank was built on that spot. We can also see that the building that was destroyed in the Tommy’s Silver Dollar fire is looking good and holding down that end of the block. Note the train tracks in the middle of the street, there was also a set of tracks running east and west that served the interurban railway. Crawfordsville was well connected by trains at this time. The ladies of the town would ride over to Indianapolis for shopping or lunch and students were frequent passengers as well. Many of the “big” games were played in Indianapolis as the stadiums could seat more fans. I love the idea that our students could hop on a train, ride to Indy for a day and then ride back in the evening. Those were the days!