In a previous post about Notre Dame football, I used an image of a football poster. I was contacted by Dick Hughes, a Phi Delt from the class of 1965 and living in Muncie Indiana. Dick had an original copy of this poster. Was the Archives interested he asked – as interested as can be was my answer!!

Dick drove the poster over one beautiful day and told me the story of both his poster and the image that I had used for the previous post. As I mentioned before, Dick lives in Muncie where a Ball Department Store was closing. In their cafeteria they had a number of pieces of memorabilia, including this fabulous poster. Dick was to be out of town on the day of the auction, so he sent a friend to buy this piece. The winning bid was $75 and Dick was the new owner of a true treasure. King Lumpkin, a Phi Delt from the class of 1988 took a really good picture of Dick’s poster and a copy of that photo was reproduced in poster size. This was the image that I had used in the earlier blog posting.

The poster is now on display in the Archives and is really just wonderful. A great bonus of this poster is the letter written by a Notre Dame student to his parents on the back. Dated Nov. 17th 1894 the letter talks about Thursday’s game against Wabash and how our team was much larger than the ND team. The final score was 30-0 in Notre Dame’s favor with part of the second half unfinished due to darkness. We lost and lost big, but the poster is still just a delightful piece to have for our collection and many thanks to Dick for spotting it and securing it all those years ago. 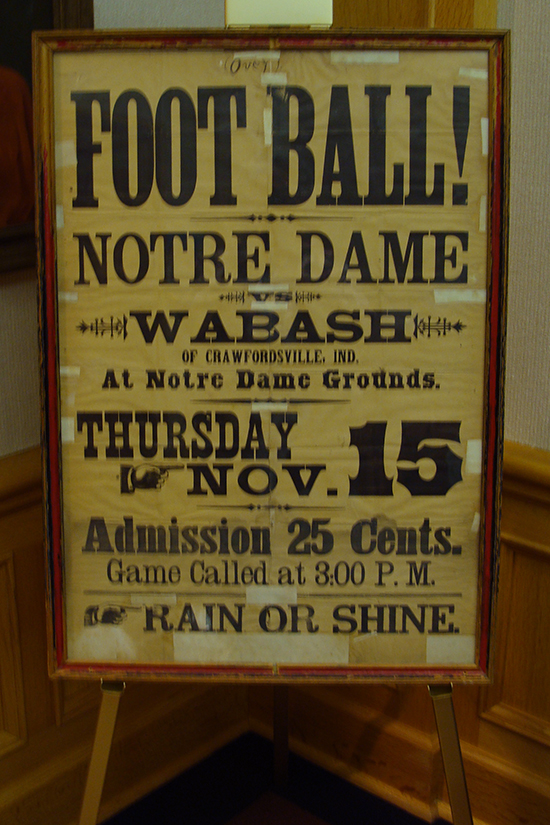 This poster is another great example of Wabash men preserving their history. Thanks Dick for saving this treasure and a huge thank you for personally bringing it to the Archives!!