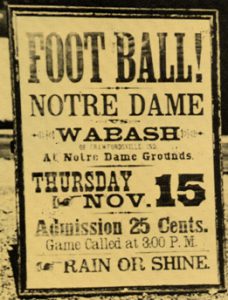 In 1905 Wa­bash beat Notre Dame on the University’s home field – an achievement which no team would repeat for twenty-four years.  The win was no fluke, no miracle… (Coach) Cayou’s boys demonstrated The Chief’s oft-repeated statement that ‘a real will to win cannot be denied.’ Besides the glory of having beaten Notre Dame on its home field (an achieve­ment highly regarded by all opponents before and since) Cayou’s Little Giants had another distinction.  If that was not the first football game to be broadcast in Indiana with visual effects to an absent audience, then some authority should come for­ward with irrefutable evidence to prove otherwise.

Due to a normal lack of funds among students, and of time among employed citizens, not everyone who wished to do so could make the trip to South Bend .  So some great mind, or some concert of great minds, went into action.  A cable was strung across a Crawfordsville street, from the top of the Traction Terminal to a similar height on a building opposite.  The cable was marked off to represent the yard lines on a football field, scaled down to fit the space.  A football, or a symbolic representation of one, was at­tached to a light trolley running on the cable and lines were extended from it to handlers at the opposite ends.  The trac­tion electric railway system had a free telephone line running to South Bend, and a local line was run from there to the Notre Dame field, where a spectator was prepared to give a play-by-play report of the game.  His comments were re­broadcast by megaphone off the Traction Terminal roof in Crawfordsville, and those handling the lines moved the football back and forth to follow the action ­of which there was plenty, including not only the Wabash winning touchdown but a successful second-half stand by Cayou’s boys on their own one-foot line.”