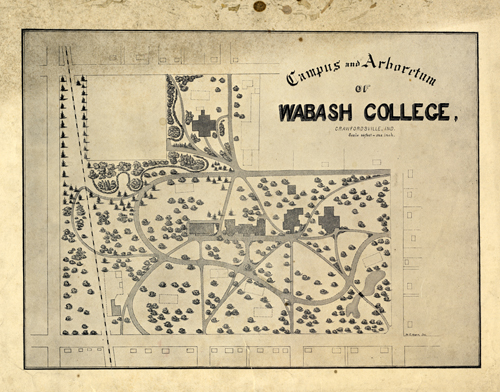 This old map of campus is full of interesting tidbits…

Let’s start with the buildings shown. At the top of the map in the center is a cross-shaped building. That was the old Polytechnic Building which also served as the Hovey Museum.  About midway down the map we see the line of buildings of our historic campus. Starting from the left is South Hall, then Center with its wings, Peck Hall of Sciences (behind this building you see a small square building, the power plant about where today’s flagpole stands) and the Yandes Library. From this combination of structures we know that this map was made after Yandes opened in the early 1890s, but before the Polytechnic was razed to build the new gym and armory in the late 19teens.

Note that there is no Mall and no Chapel. These were both constructions of the 1920s. It is interesting to me that several of the sidewalks of today are remnants of the old campus as shown here.  The sidewalk that today runs from the Sparks Center and northeast at an angle is the same path as shown here.  Also the path from the northeast corner of campus through the Arboretum is the same. Lastly,  the rectangles scattered throughout the Arboretum. I believe that these denote the tennis courts of that time. There are other items sketched in here and there. I think perhaps this map was used in planning efforts to modernize the campus or master planning, as we call it today.  Whatever the reasons, this map has a lot to teach us about Old Wabash and we can learn a great deal about the campus by studying it closely.