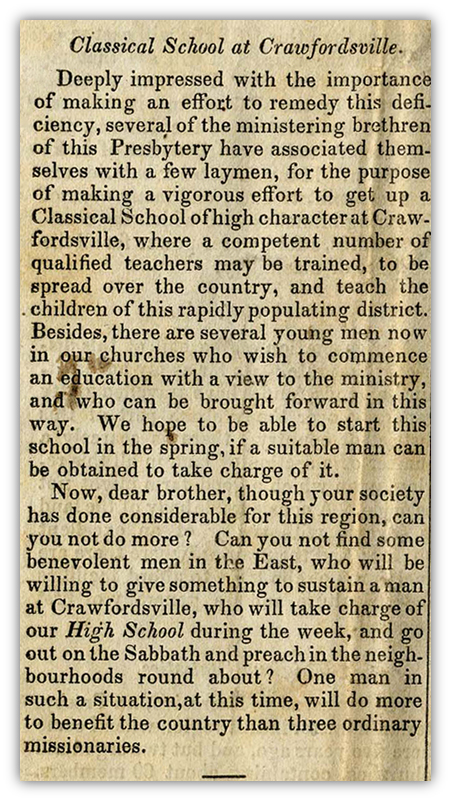 This appeal was printed in the American Home Missionary magazine of January 1833. It is a posting for the first member of the Wabash faculty. You will note that the position is listed for a teacher in the Crawfordsville Classical High School. From the founding minutes of November 21, 1832 we read, “Resolved unanimously that the institution be at first a classical and English High School rising into a college as soon as the wants of the country demand.”

It seems that Caleb Mills saw this posting and was intrigued enough to write to his friend Edmund O. Hovey, who was one of the founders, and inquire about the position. In June of 1833 Caleb Mills applied to James Thomson, President of the Board of Trustees, with these words, “Brother Hovey knows me, and is acquainted with my fitness and qualifications for such an office.”  A good recommendation must have followed as on July 16, 1833 Mills was appointed as the first member of the faculty.

As we read in the posting, this position included teaching during the week and preaching in local churches over the weekend. Mills did both, often walking several miles out to the church on Sunday morning and, after a good sermon and a good meal, would turn around and walk back to town. This preaching furnished a subsidy to the meager salary provided by Wabash. Later in his life Mills would note that at the beginning of his career, when he worked hardest, he made the least amount of money. As he neared the end of his career, and worked the least, he made his greatest salary. 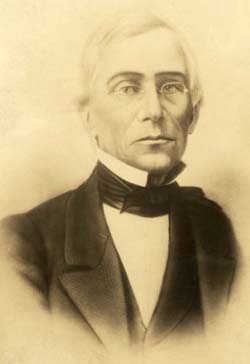 Part of Caleb Mills’ passion for this position was his drive to see free common schools available to all children.  In a letter to Hovey Mills stated, “Public sentiment must be changed in regard to free schools, prejudice must be overcome, and the public mind awakened to the importance of carrying the means of education to every door. Though it is the work of years it must and can be done. The sooner we embark in the enterprise the better.” He stayed true to his vision and largely due to his drive and passion, the free public school system was created in Indiana. It is for this good work that he is known as the “Father of the Indiana public school system.”