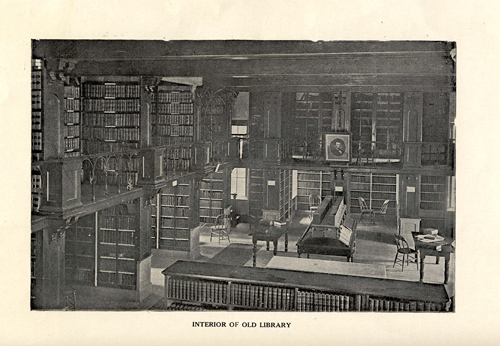 This image shows the first floor of the North Wing of Center Hall when it was a library. This location is now used by the Business Office and bears little resemblance to this picture. This was the campus library and in this photograph the camera is looking west or toward the mall. The space was built with 16’ ceilings which allowed for two floors of library luxury.   We can see the alcoves on the left and at the back of the picture. These were used to organize books. Several donors gave books, typically on a single topic, which filled their named alcove. Indeed, there are many books in the Lilly Library that still bear the old alcove bookplates.

A couple of years ago when the Business Office was gutted for a remodeling, I slipped in the side door and was amazed at the size of the space when completely open. It is hard to get that sense with the new walls in place.

I love this picture and like to share it when I can. At a presentation on campus Sherry Ross noted that the picture of Abraham Lincoln hangs behind her desk in the Deans’ offices.  It’s good to know that Abe hasn’t gone far…he’s just down the hall.