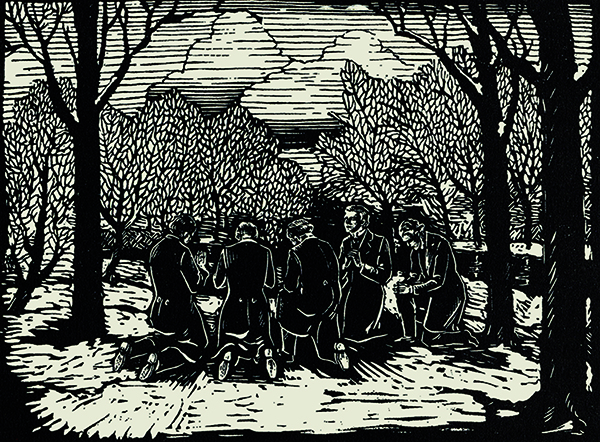 The month of November is special here at Wabash. While the world around us grows colder and darker – talking temperature and daylight savings time issues – it is also a time of remembrance and celebration. For it was in the month of November that several brave and determined fellows gathered here in Crawfordsville for a monumental meeting. It is cold here in November, it is always cold here in November. It is also often wet and dark as the days grow shorter and shorter. How much  more impressive it is then that these fellows came from near and far to discuss founding a college in the Wabash Country. We know from the stories handed down that it was cold that year as the much heralded “Kneeling in the Snow” happened the next morning.

From the Wabash Magazine of June, 1907 we have this quote from Horace Hovey – the son of Edmund Hovey, “Everybody knows of the ‘Founder’s meeting’ at the Old Brick house in Crawfordsville, November 21, 1832. Rev. John M. Ellis presided; Rev. James Thomson stated the object of the meeting; Rev. Edmund Otis Hovey was secretary; Rev. John S. Thomson made the opening prayer; Rev. James A. Carnahan was present; also elders John Gilliland, John McConnell and Hezekiah Robinson and a visitor, Mr. Bradford King, of Rochester, New York, who infused the ‘manual labor’ idea. Hon. Williamson Dunn, who had already given fifty acres of land to Hanover College, authorized the offer of fifteen acres to this new born institution – which determined its location at Crawfordsville. When the five ministerial founders visited the spot and drove the corner stake for the first building, they all knelt in the snow while Rev. John M. Ellis made the dedicatory prayer.”

These fellows were young, nearly penniless, but determined. They were religious men, missionaries, ministers and elders in the local Presbyterian Church. They were all clear in their determination that if the churches and schools of this area were to thrive, they would need men educated as preachers and teachers. If the Wabash Country was to prosper then education and organized religion had to be the foundations. The likelihood of enough preachers and teachers coming to this frontier settlement was small. Clearly, they would need to grow the educational and religious systems from within this area. A school was needed that could take the young men of the area and educate them for duty in the schools and churches. It was with this in mind that James Thomson called a meeting at his snug little home late in November. It was with the enthusiasm of youth and a belief in the divine that decided upon a bold course of action. They would accept the offer of the donated land. The morning after the meeting at Thomson’s several of those present walked through the woods to inspect the site. We can imagine a crisp, cold morning with the sun glinting off of the snow like a million diamonds. It must have seemed as if, in that moment, anything was possible. They knelt and prayed, consecrating the site to this audacious undertaking. And now, nearly two centuries later, the small college for men that they blessed continues to educate preachers and teachers. They would delight to know that it also educates men of science, poets and artists, doctors and lawyers, musicians and mathematicians. Their dream of a college continues and stronger than ever. So as we look toward 200, it is so important to look back as well. To think of these determined young men and to honor their hardships and struggles and to realize what a bold move this was so many years ago.

Birth of basketball?
185 years ago – the beginning