In the previous post we saw images from the 1898 Viewbook of Wabash College. In this posting, we will look at a second set of images from that same publication. Let’s start with the fraternities that were active in 1898. 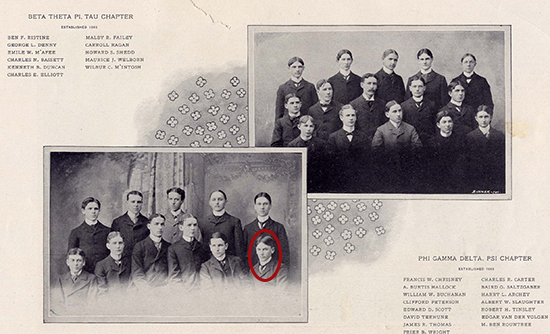 The photo on the lower left is the Beta Theta Pi fraternity and among these 11 young men, one is of particular interest to any member of the Wabash family. The rather serious young man at the right end of the first row is Carroll Ragan, who wrote the music for “Dear Old Wabash” the song we still sing with such gusto over a hundred years later. 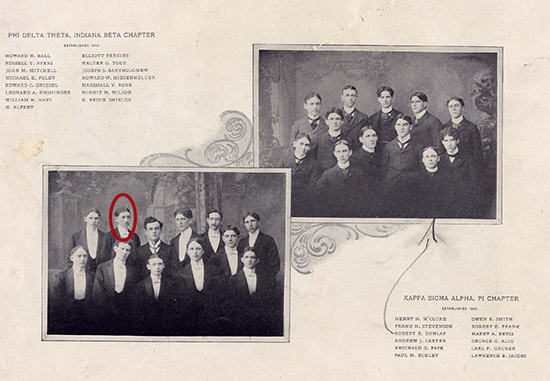 And here are the Phi Delts and the Kappa Sigs of 1898. In the photo at the bottom left there is one young man who will go on to command great power and world wide fame – in the back row, second from the left is Will H. Hays – who would become the Chairman of the National Republican Party, push hard for a woman’s right to vote, serve as Postmaster of the U.S. before leaving to head the Motion Picture Producers and Directors Association, otherwise known as the Hays Office.

Also important to remember is that these fraternities were not yet residential. They met in various second floor spaces in downtown buildings. Wabash College The First Hundred Years tells us that it would be a few years yet [1902] before the Phi Gamma Delta fraternity acquired the first home for its members. The Phi Delts got their “new” old house the next fall, 1903. It would be three years before the other fraternities, noting the success that the two residential fraternities were having in recruiting, joined the movement and secured houses as well.

At this time on campus, one of the bigger clubs was the Glee and Mandolin Club pictured below in 1898. Circled in red is another picture of Carroll Ragan. The Glee Club would go on tour, visiting several towns in the area where they were often quite a hit. Sometimes a few just barely making the train out of town as they were delayed due to flirting with the young ladies. 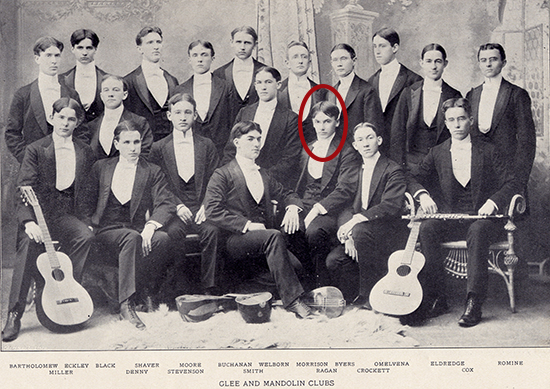 Atop all of this student hubbub, then as now, was the Faculty of Wabash. 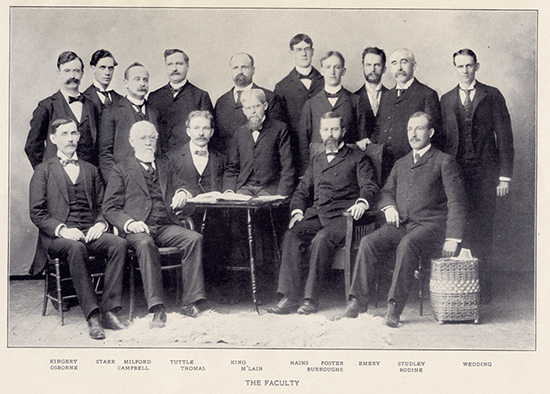 Sixteen members in all – some whose names we still remember. At the far left in the second row is Professor Kingery, remembered by most for the building which carried his name for the next 100 years. John Lyle Campbell, front row, second from the left was an alum of Wabash who returned to teach and garnered great fame for the College. He worked professionally in the summer as a surveyor and engineer. The highest profile position he held was as secretary charged with the management of the 1876 Philadelphia Exhibition. Third from the left on the front row is Mason B. Thomas, “The Maker of Men” whose students helped raise the money to build and furnish the Thomas Laboratories in his honor. And tallest of all is Daniel Dickey Hains on the back row who taught Greek. Also an alumnus, for years at Commencement his classes presented classic Greek theater in the east campus, where Martindale Hall was built.

This faculty was blessed with a tremendous talent for teaching and, for many there was also a long association with Wabash. These teachers brought Wabash into the 20th century, not without growing pains in a landscape transformed by the rise of the public high school and increasingly influence of the state universities. 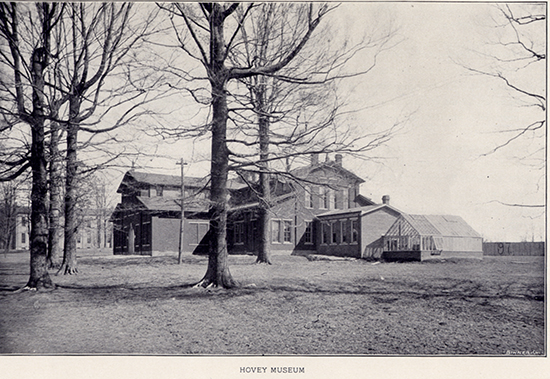 The building above is the Hovey Museum – originally built as the Polytechnic Gymnasium to house the military readiness and engineering program. With an instructor funded by the government, this program began after the Civil War. Students were taught to march in formation, the finer points of artillery fire, civil engineering and forced into a physical fitness regime. The obvious need for such a program faded and along with it student interest in marching and pulling the cannons. For years this building sat, mostly empty. In the 1880’s a young professor with a lot of enthusiasm and energy, John Merle Coulter, transformed it into the Hovey Museum. The re-purposed building was named for our first professor in the sciences, Edmund O. Hovey.  The  collections, both purchased and donated, were overflowing their rooms in Center Hall. A portion of the Hovey Collection may be seen in the photo page below. The cabinets were full of specimens for studying zoology and botany. The second picture in the trio is of the labs in the second floor used for dissection and hands-on work, while the third picture is of the lecture room. 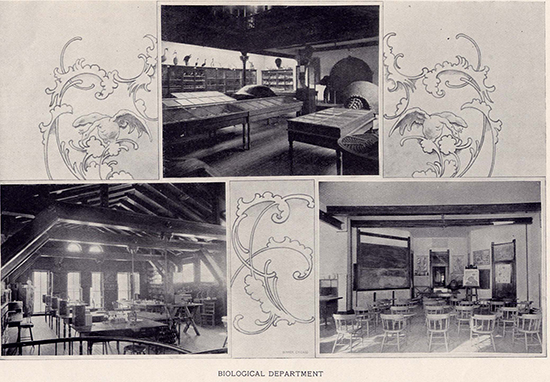 This next set of three pictures finishes the look at the facilities of the Hovey Museum. The first photograph is a special research area and library for the higher level students. The second picture is of the office and laboratory of Mason B. Thomas, equipped with all of the latest equipment. At the bottom is the greenhouse which was attached to the Museum on the western side. This building was demolished to build the Armory and Gymnasium. The collections were moved to South Hall and decades later dispersed all over the country while the greenhouse was moved to South Hall as well. 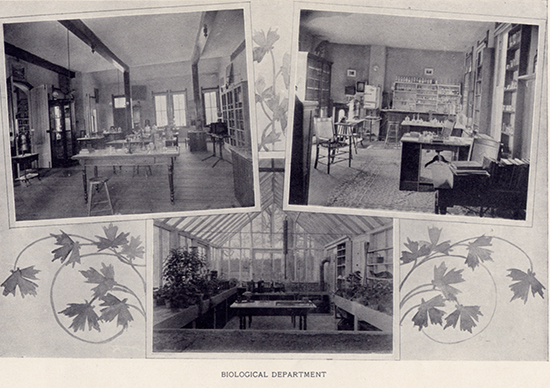 That is Wabash as it presented itself in 1898. From the oldest to the newest buildings, including student activities like the fraternities, sports teams and glee club. A very different time and place and yet, in a lot of ways, much is the same. The enthusiasm of our students, the care and teaching of our faculty, a commitment to modern science facilities, all of these are still here today. A part of our history that connects the past to the future.