Before it was the Bell game… 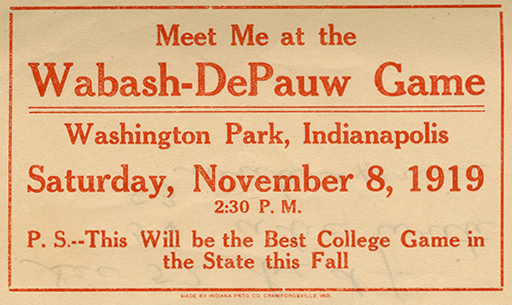 The Wabash DePauw game is a big event against one of our arch rivals and it is always a hard fought contest. The DePauw game has traditionallyl been a big draw for the fans of both teams and this was why in 1919 it was played in Washington Park in Indianapolis. Here is another look at the game of 1919, the same year as our opening image. This great cartoon was created by J. Allen Saunders [W1920] and printed in the Wabash Magazine in December of 1919 for the summary “Football Issue”. 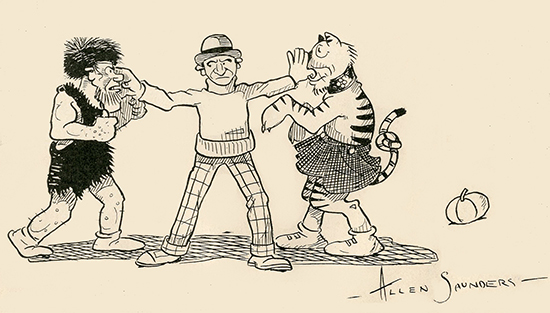 It is clear that Saunders has a talent for cartooning, he would go on to create some of the most notable comics of the mid-twentieth century, and that Wabash was well into its Caveman phase. Note that the Tiger of DePauw has a knot tied in his tail. The 1919 game was played to a tie, one of only nine such in the long series.

In this era Wabash sometimes played in Indianapolis to accommodate the crowds for the biggest games AND for the biggest gate receipts. Nearly all of the student body attended these notable games as at that time there was a reliable and cheap method of transportation to Indianapolis. The Interurban system enabled the fans to travel easily to attend the big games. Here is a former blog post which explains the ease with which anyone from Crawfordsville could travel to Indianapolis.

A hundred years ago…

BUT the game in Indianapolis in 1919 wasn’t yet the Bell Game, because we had no prize until 1932. It was in that year – our Centennial anniversary – that the Monon Railroad donated a bell off of one of their locomotives. The Monon was a line that served both Greencastle and Crawfordsville. It was a bit of a slow starter as the first time we ever played for the Bell the game ended in a tie. Here is summary of that game from the 1933 yearbook. It sounds like a hard fought game between two evenly matched opponents.

Here is a Bachelor article which explains the gift in more detail. 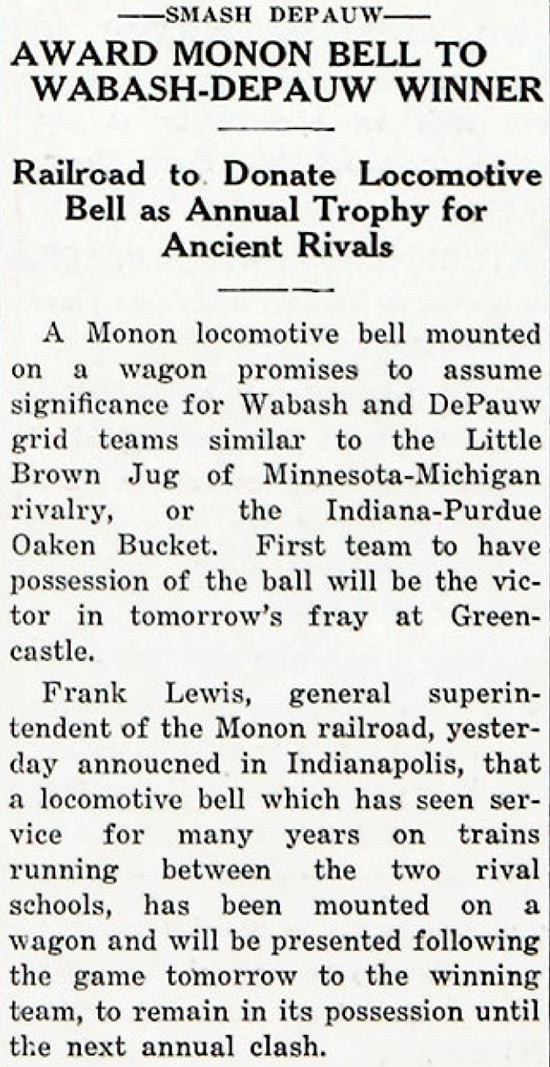 In a totally different game, here is another write-up from the Wabash Magazine about the 1912 game and although over a hundred years ago, this score seems like some of our more recent games.

This team was pretty special and I love the opening sentence, “…using a variety of plays old and new,” which is referring to the daring new play perfected by Wabash coach Jesse Harper. The forward pass was a focus of Coach Harper at Wabash and when he left here to go to Notre Dame, it went with him. It was the key to Notre Dame’s iconic victory over Army in 1913, the game in which Knute Rockne came to national attention.