Wally in the Army 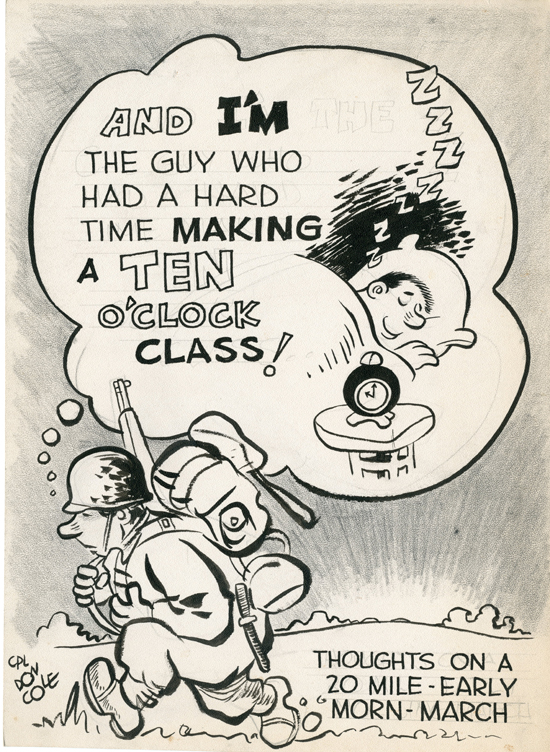 Last month’s post about the creator of Wally Wabash promised a look at Don Cole’s good work after leaving Wabash. Cole has a talent for finding the heart of the matter and bringing that out in his cartoons. Cole and his creation which he called the “Caveman”  went off to the army together. What resulted is a witty look at army life through the eyes of a private.

Drafted just following Commencement, Cole was inducted into the Army in September of 1952. In no time at all Cole made his mark on the army, as an illustrator in the visual aids section of the MP Board. He created a new character, MP Dooty, which was featured in many training pamphlets and in a regular monthly cartoon panel in the Military Police Journal, circulation 20,000. This is a photo of Cole at his desk in the army. 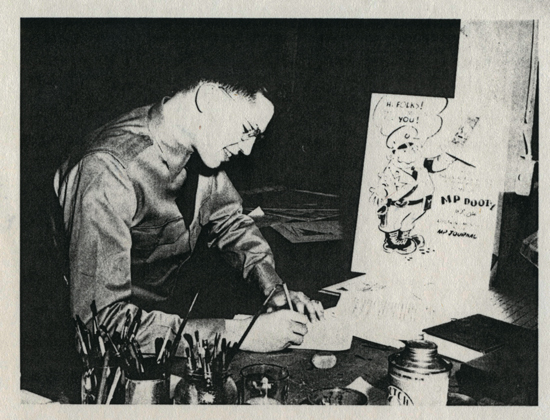 From the Wabash Bulletin of June, 1953 we have the following interaction between Dick Banta, the Editor and Don Cole. The exchange starts with Banta’s description of Cole’s work at Wabash:

For his contributions to college publications he created a “Caveman” figure which was accepted by his contemporaries as the true rendering of the typical Wabash Man – a character in no way reminiscent of the Man of Distinction – who is now, as Cole will tell us, in the army too.

Cole’s Uncle Sam gave him the nod soon after Commencement. Wondering what might have resulted from the impact of a union between the Armed Services and a Phi Beta Kappa cartoonist, we wrote to ask him for a BULLETIN contribution which would report on Cole in the Army. This is his reply:

So they finally found something for you to do around Wabash – besides drinking coffee in the Scarlet Inn. I’m sending you some drawings I whipped up in my spare time. And I hope they are what you wanted. You might be interested to know that I am now an illustrator in the Visual Aids Section of the MP Board. The Board handles the doctrine and training of the Military Police Corps.

As you can see by one of the drawings I sent – I am doing a monthly comic panel featuring one MP Dooty who is none other than the old CAVEMAN with an MP uniform. Happily enough this character caught the eye of some top brass in the MP corps and they are planning to feature him in film strips and pamphlets for training Military Policemen. I am working on one of these pamphlets at the present – it’s called ON PATROL WITH MP DOOTY. The comic panel appears, as I said, monthly in the Military Police Journal (circulation 20,000), and the guy seems to be getting popular.

I was inducted Sept. 2, 1952 and took my basic training with an MP company. And just after Christmas and after some fancy talking I got a permanent assignment with the Board. I consider myself quite lucky and I’m well satisfied with my present lot. I’ll be even more satisfied after May 23rd for on that date I am to be wed to Miss Sonja Hartzell, (my last year’s Pan date).

These images are Cole’s report as printed in the Wabash Bulletin of June, 1953. 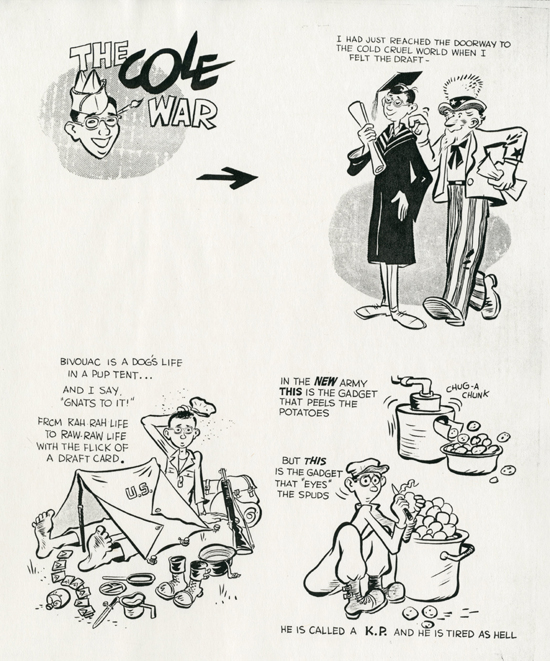 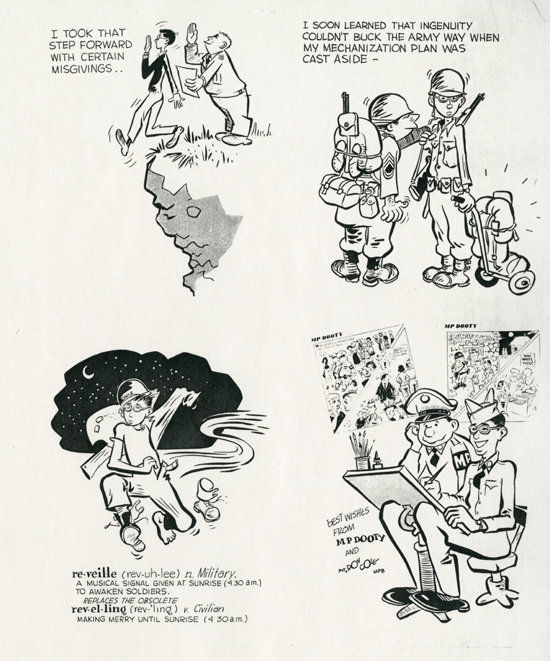 And look at that last cartoon. There is Wally Wabash in his MP uniform keeping company with his creator Don Cole. I hope you have enjoyed this look at Wally’s further adventures. Truly, Don Cole is an artist with a talent for cartooning! 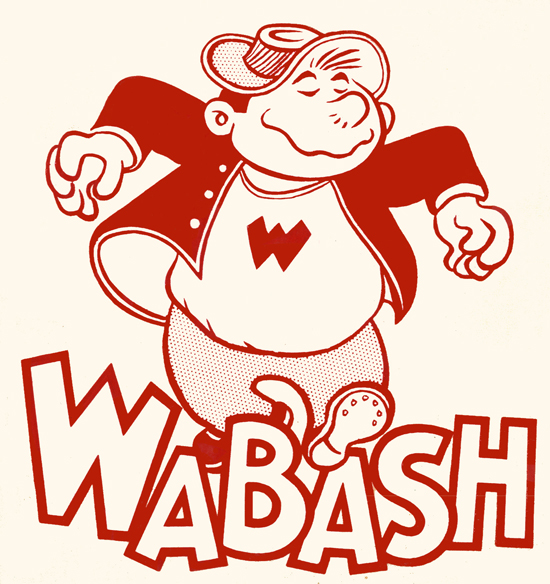