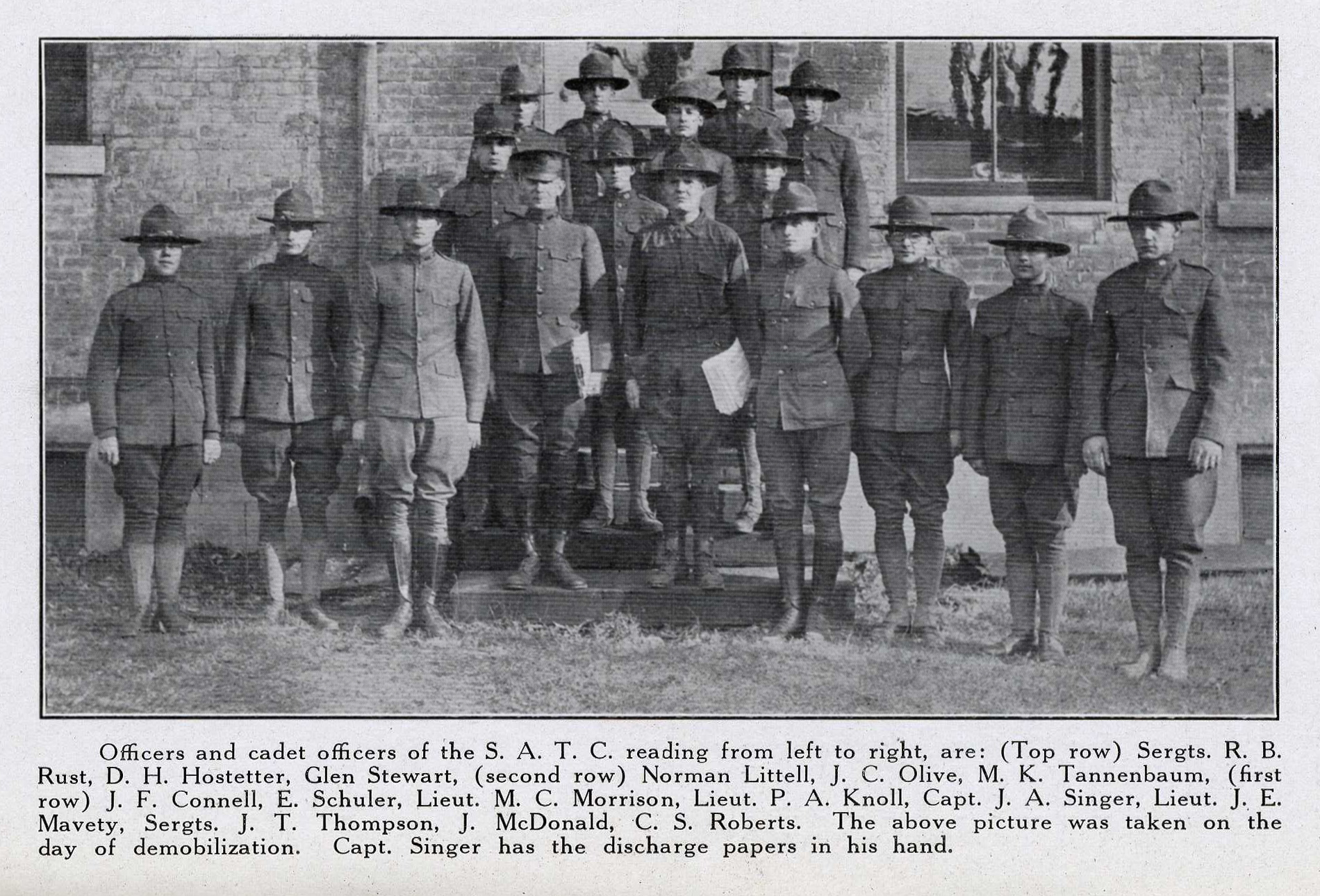 Many news stories of this time are calling the current pandemic unprecedented when in point of fact, it is not. The influenza of 1918 is often referred to as the “Spanish flu” and estimates are that this illness killed 50 million people worldwide. World War One claimed 16 million lives. That is to say that the influenza pandemic of 1918 claimed more than three times as many as the Great War and yet we know so little about this time.

I might start by noting that the National Archives has an excellent site [http://www.archives.gov/exhibits/influenza-epidemic/] that offers the above statistics and a great deal more. Unlike the current virus, young people were among the hardest hit. Yet we rarely hear about this incredible time. Let’s look at Wabash in the late 19-teens and see how we dealt with this tragedy.

Wabash was among the many colleges to have a Student Army Training Corps [SATC] program during the Great War. So let’s start with the rationale for the program. It was noted right across America that the number of men in college had decreased due to army enlistments. The fear was that there would be a shortage of men who could serve as leaders during the war and after it as well. The SATC was created to prevent that scenario from developing in America.

Details of the SATC program from 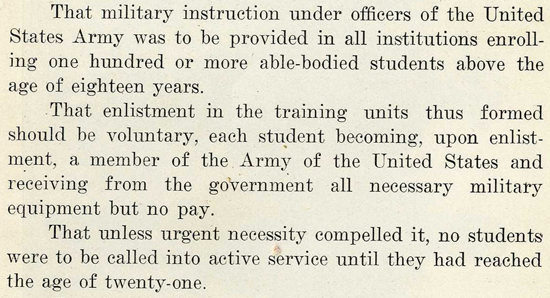 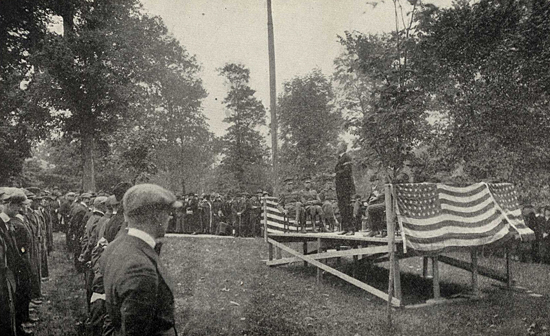 Again from The Wabash College Record:

Early in September the Board of Trustees of Wabash College signed a contract with the War Department in which it was agreed that the College would furnish lodging and board as well as academic instruction to 400 soldier-students. Ground was cleared at once on the campus between South Hall and the new gymnasium for the erection of two barracks with capacity for two hundred men each. By registration day, October 1, one of these barracks was practically ready for occupation and the other was well under way. These buildings were planned after inspection by representatives of the College of the barracks at the Speedway Aviation Field in Indianapolis. Each building is 215 x 42 feet and has walls eleven feet high above the floor. They are substantially built, by no means unattractive structures, well lighted by windows placed at eight foot intervals, and kept at a comfortable temperature by steam heat from the central heating plant of the College. Lavatories and showers and stationary laundry-tubs in the sufficient number for the four hundred occupants of the barracks are provided in a separate building built between the two barracks.

The barracks below were built where the Chapel now stands. 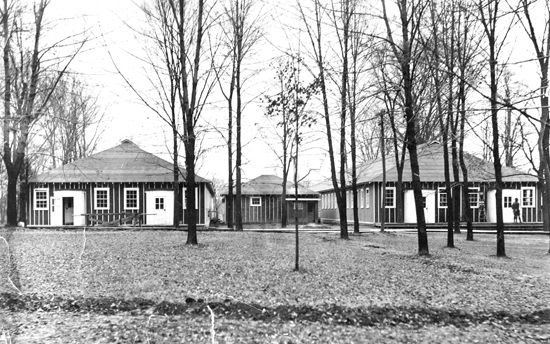 In addition, the College was charged to feed these men. And, of course, this was before the time of the Campus Center [now the Sparks Center] so there was no dining hall on campus. A cafeteria was established in the auxiliary gymnasium on the second floor of the Armory. Forest Hall was also pressed into service as the headquarters and guard house. The men were sworn in and immediately began drilling.

SATC unit in the Mess Hall on the second floor of the new Armory. 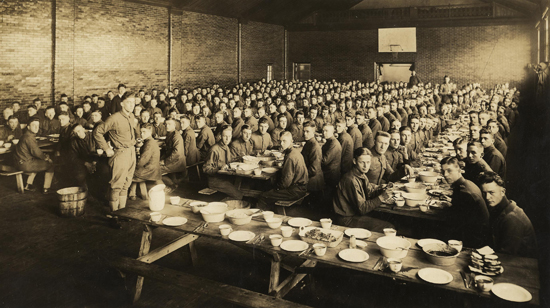 The image below is of the first drill. As you can see, the uniforms had yet to arrive.

The program proved quite popular and five hundred and twenty five men came to Wabash. This was quite a strain on the system, but every available room was pressed into service with some even lodging in town. It was quite an upheaval to the day to day workings of this small college. But the commander was well liked and, perhaps more importantly, well respected by his men. Just one week later, on Monday, October 7, 1918, the influenza hit Wabash. Six men appeared at sick call with high fevers and by that night 11 more were added. All of the sick students were taken to the Phi Delta Theta fraternity on the corner of College and Walnut streets. The fraternity was in the process of being converted into a camp hospital when suddenly there were patients. The description of the next day is alarming. From Wabash College The First hundred Years:

The two companies had scarcely lined up when two men pitched forward suddenly to the floor. They were being carried out when another man in the ranks fainted. The man next to him bent to pick him up, and he too fainted. Before roll call had been completed ten men had fainted in the sight of the badly demoralized corps….But college classes started that day so inauspiciously that an announcement was made in the afternoon of the suspension of all classroom work for an indefinite time. That night there were thirty-five men in the hospital. For a day or two the number of new cases decreased. Then it rose again, so quickly that on October 12 there were ninety-five men crowding every room and nearly every hallway of the transformed Phi Delt house, seven of them with serious cases of pneumonia. The hospital had been organized to take care of six patients, with one nurse in charge.

In all one hundred and twenty cases were received by the hospital during the run of the epidemic, and not a single boy lost his life. College and town were very proud of this record. It was attained only by an outpouring of energy nothing short of heroic. Miss Mary Jolley, of Crawfordsville, head nurse, remained steadily at her post in spite of the fact that she herself was attacked by influenza. Volunteers stepped forward to help her. Three of these volunteers were trained nurses – Miss May Huston, Miss Edith Hunt, and Miss Ethel Newell.

There was one tragedy, to soften the rejoicing that was felt when the epidemic was seen to have run its course. The third of the trained nurses to volunteer, Miss Ethel Newell, had offered her services in spite of the fact that she was convalescing from a very recent attack of pneumonia. She knew the risk was great, and took it. Pneumonia returned and she died, at the home of her parents…On the Roll of honor of non-coeducational Wabash her name does not appear. It surely belongs there. 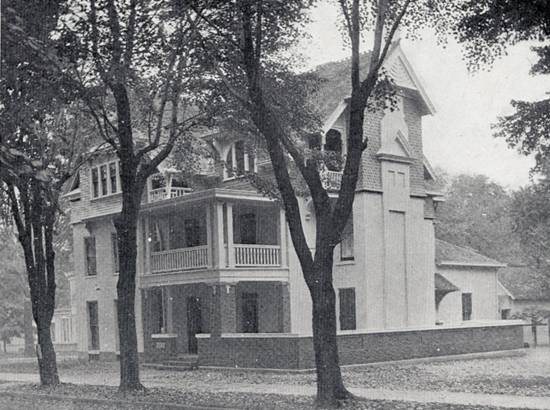 Phi Delt house which served as the Infirmary is in the same location as the current house.

By October 24 of 1918 the outbreak had run its course and all classes and activities resumed. The camp was short lived as an Armistice was signed on 11/11/1918 and the SATC was closed. I might end by noting that much of what we know of this time comes to us from the writings of one of the members of the SATC.  This dedicated young man, Norman Littell [W1921] sat down in his junior year and wrote a history of the Student Army Training Corps which survives yet today.

For more on the pandemic of 1918, here is a link to a piece from the National Archives

Posted October, 2014 and updated 03/17/2020.
Beth Swift
Archivist
Wabash College
Ringing in the new – a special time at Wabash
The beginning was nearly the END!