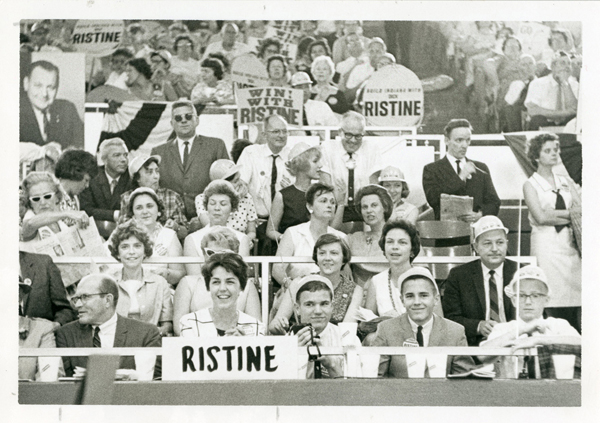 Wabash has always been all-male, and mostly its faculty have been men as well. But as we all know, there is so much more to the story of Wabash than its men. From the beginning there have been strong women who loved this place every bit as much as the men they knew. Mary Hovey, as one of the first faculty wives, felt this love too. Her letters give us a glimpse into the day to day world of the pioneer era at Wabash. There have been so many women who have loved this old place well that there just isn’t enough time to name them all. But today I would like to focus on just one woman. Last week Wabash lost one of her very few alumnae when Lou Ristine [W1941] passed away. I was so taken with her obituary that I really wanted to share it as it really is a lesson in giving from the heart!

She died peacefully in Indianapolis on July 7.

“Lou” was born Oct. 11, 1924, to Thomas Earnest and Mary Edna Muir Durrett in Wichita Falls, Texas. After high school, she pursued her lifelong interest in music, studying first at Midwestern State University, then Southwestern University, and finally University of North Texas. In 1944, Lou met Richard O. “Dick” Ristine. In 1946, they were married in Wichita Falls and moved to Indianapolis. Within a few years they moved to Crawfordsville.

In Crawfordsville during the ‘50s and ‘60s, Lou and Dick raised three sons. Lou sang in the choir at Wabash Avenue Presbyterian Church. She helped launch two programs for new volunteer groups serving the local hospital, as well as the town’s first Meals on Wheels program. She hosted a morning talk show on WCVL-AM. In 1962, she was music director of the Crawfordsville High School production of “The King and I.”

Lou grew to love Wabash College. She opened her home countless times to a multitude of friends from the college, town and beyond. A frequent highlight of parties at the Ristine home at 606 W. Wabash Ave. was a sing-along with Lou on the piano. The couple also loved entertaining at their Sugar Creek cottage.

In 1970, Dick and Lou moved to Indianapolis. During their Indianapolis years, Lou co-chaired the Governor’s Mansion Commission, which selected the current site of the governor’s residence. Governor Otis Bowen named her a Sagamore of the Wabash for her service to the state. Lou helped establish the Downtown Beautification Committee, which among other things “bricked” Monument Circle. As in Crawfordsville, she helped launch Meals on Wheels. The Indianapolis Museum of Art, Second Presbyterian Church and other Indianapolis institutions benefited from her service on a variety of committees and projects during the ‘70s and ‘80s.

In 1983, Dick began working full-time for Wabash. Within a few years, Lou and Dick moved back to Crawfordsville. In 1992, in recognition of her decades of unique service, the all-male college made Lou an honorary alumna, only the second woman so honored in the history of Wabash. Following Dick’s retirement from the college in 1993, they moved permanently to Leland, Mich., where they resumed singing together in the church choir and otherwise participated in community activities. Her love of gardening, which began in Crawfordsville and continued in Indianapolis, reached its height in Leland. Everyone who passed by enjoyed the beauty of their riverside landscaping. Lou and Dick were fortunate to enjoy many years in Leland until he passed away in 2009.

Memorial contributions may be made to Wabash College in Crawfordsville, Second Presbyterian Church in Indianapolis or the Leelanau Conservancy, P.O. Box 1007, Leland, MI 49654.

What a life of service she embodied! And to the above, I would simply add  that when asked to provide a picture of Lou the photos I found might serve just as well as a tribute and here they are… 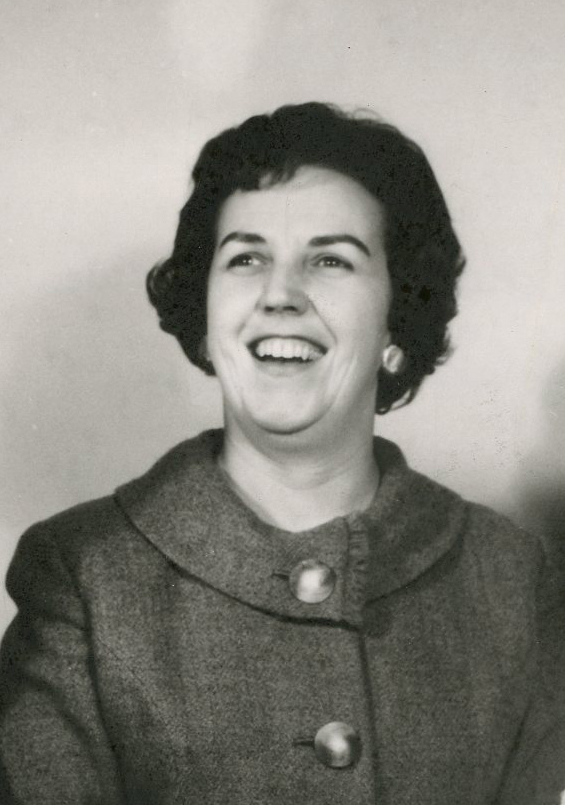 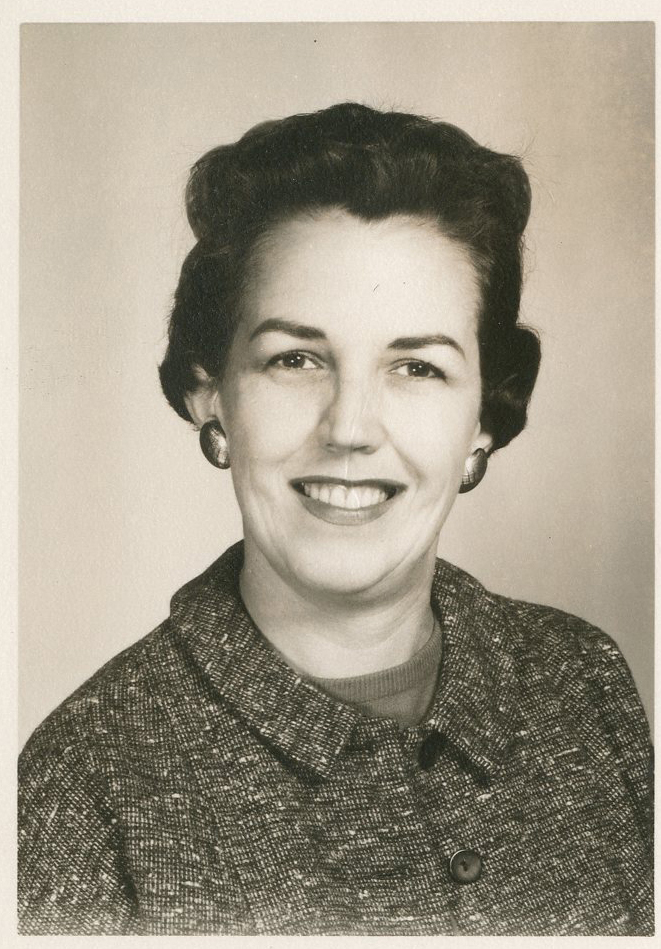 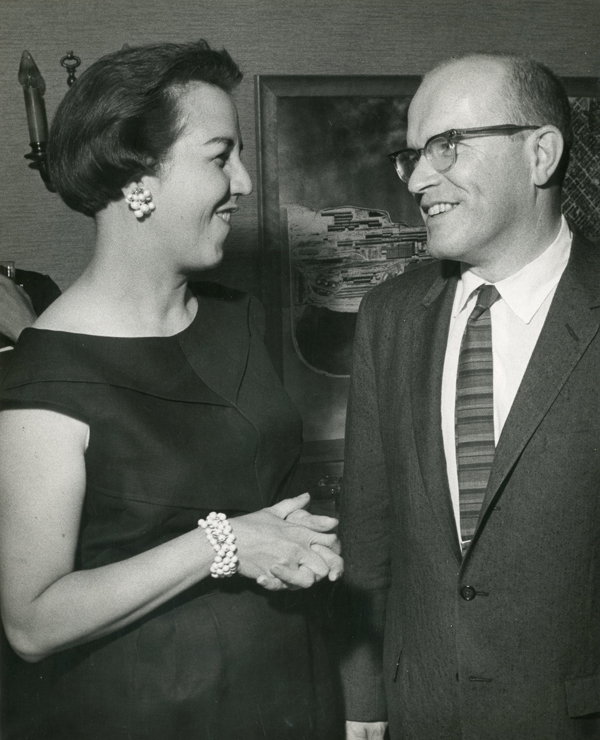 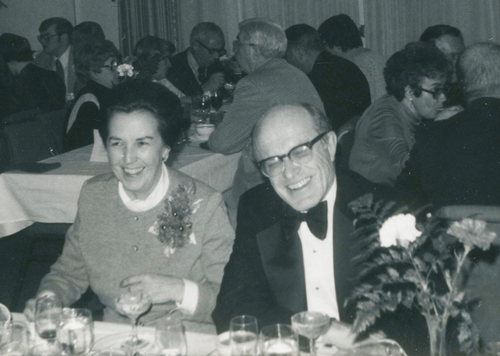 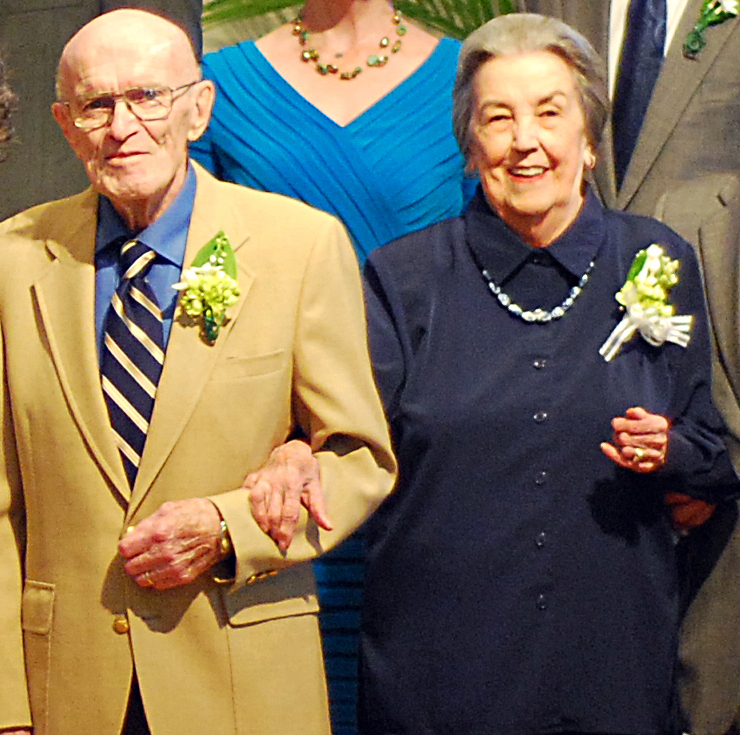 In every picture she is smiling, almost laughing. What a wonderful thing, to smile one’s way through life. Especially, I love the picture of the political convention.

Here it is again and note that it shows Dick and Lou and their sons as well.

And while it might be hard to see from the photograph above, off to the right of Lou’s shoulder, in the third row is another legend of Wabash…Ginny Hays. 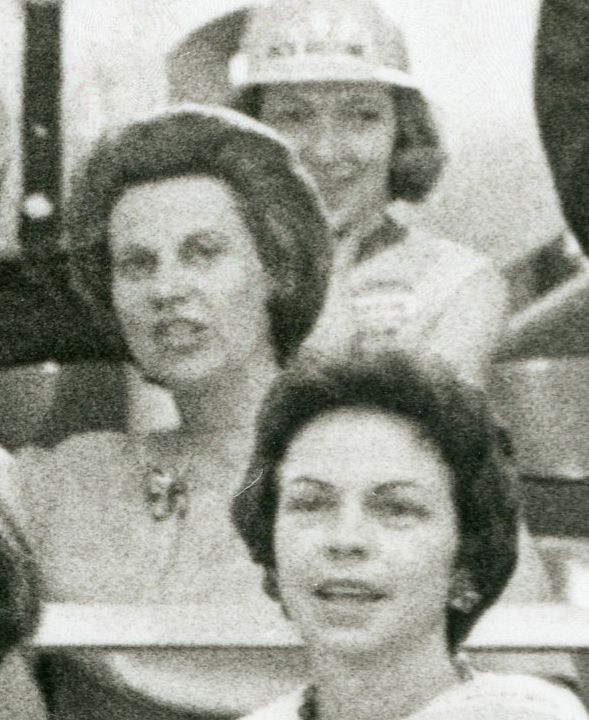 So here is a toast to the women of Wabash, and to one in particular, Lou Ristine [W1941] a grand lady with a winning smile!

PS Here are links to great remembrances of Fran Hollett, the first woman named an honorary alum and to Ginny Hays.

Old News
Ringing in the new – a special time at Wabash