Wabash at the time of the Civil War

This past weekend was the Civil War Symposium at Wabash. What a day full of new insights, old friends and a great way to honor the service of Wabash men in the War Between the States.

Asked to give a talk to the Women on Campus group this month, I decided that it might be neat to look at Wabash at the time of the Civil War. What I wanted to share with the Women on Campus was not just stories of Wabash men and their many and diverse roles in the war, but rather a look at the college itself at that time.

Let’s start with a map of the west part of town from that time period. 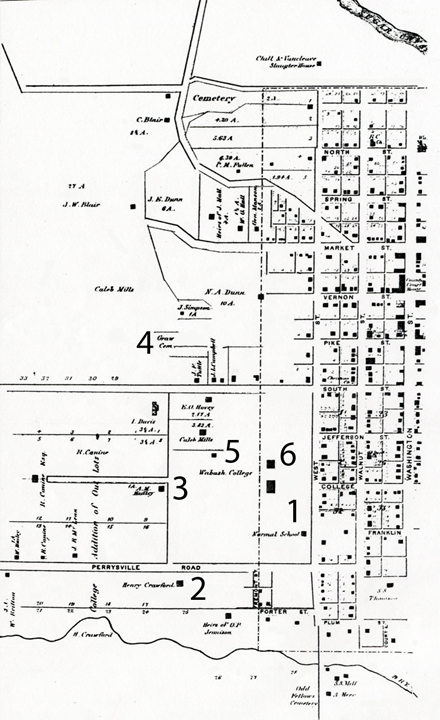 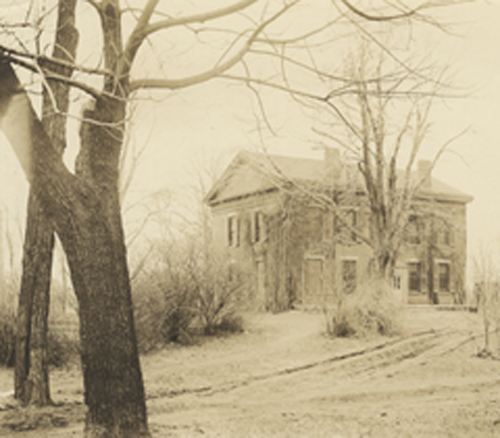 This is the Normal School, which was housed, along with the Preparatory Department, in the building many know as Kingery. Sadly, this building was destroyed in a Good Friday storm a few years ago.  The Normal School was charged with educating teachers, it is fitting that this site is now home to the Wabash Center for Teaching and Learning in Theology. 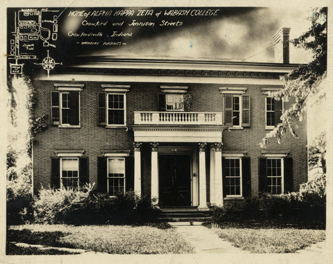 This is the Henry Crawford house, now the Lambda Chi Alpha fraternity. The area behind this home was Crawford’s Woods, a place for picnics and the scene of the town’s 1916 Statehood Centennial Pageant.

Moving clockwise on the map, the next stop is at position #3. 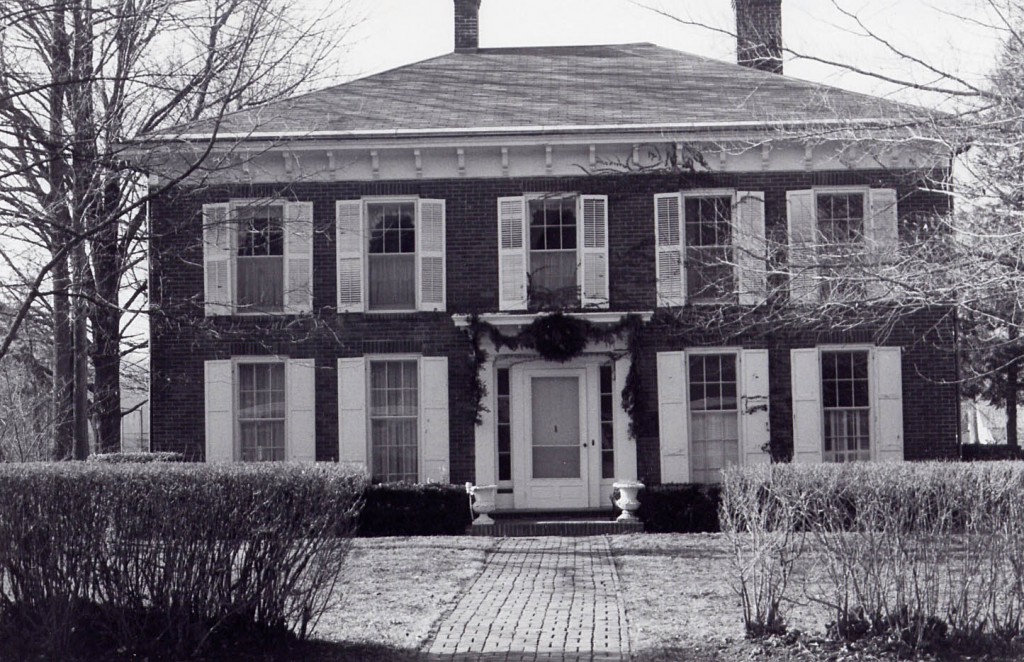 This was the home of the prep school principal, Atlas Minor Hadley, and was at that time a frame house. This home was sold to George and Yvonne Kendall by Hadley’s widow. The Kendalls bricked the exterior and lived here for many happy years before they gifted the home, now known as the Kendall House, to the College. 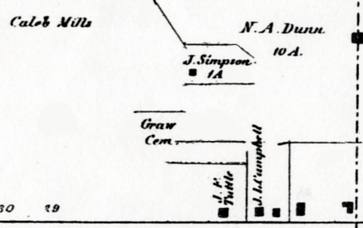 Moving further north on the map we see  #4 listed as Craw. Cem., a less than elegant name for the Mills Cemetery. This land, which was part of the original land gift to Wabash from Williamson Dunn, was by the time of the Civil War owned by Caleb Mills. This land was given to Mills by the College in lieu of salary. Mills platted this final resting place and, in very short order, family plots were designated. Burials continued in this graveyard until the creation of Oak Hill Cemetery. At that time all of the remaining graves were moved to Oak Hill where there is a very fine Wabash section. I might note that some years earlier a few graves had been moved to the Masonic Cemetery, to facilitate the westward extension of Pike Street.

Right in the center of the map is the area just west of today’s mall and tagged with #5.

There are three structures – starting at the top of the map there is the home of Edwin O. Hovey and his wife Mary. 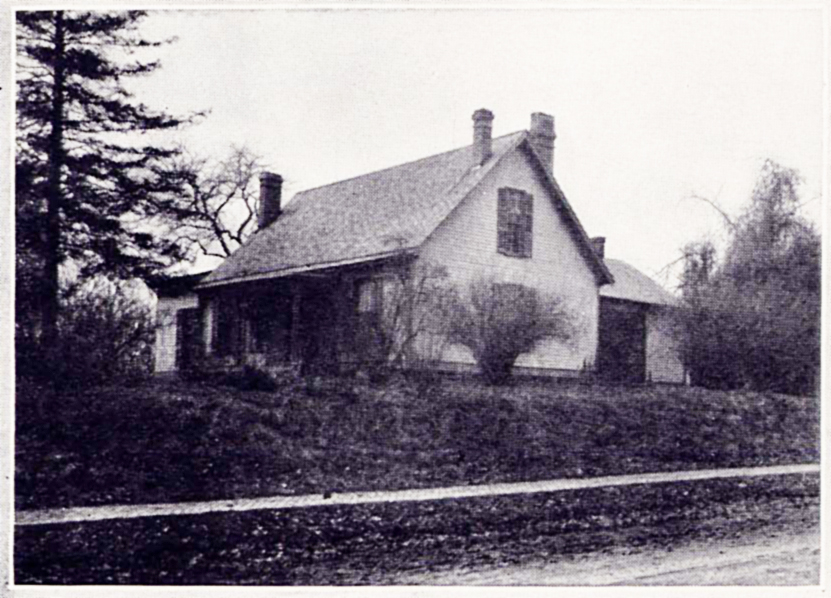 It sat on the hill just above Wabash Avenue, labeled on this map as South Street. The Hovey home was a center of life at the college and, with an attic full of musical instruments for the band and students boarding with them, must have been nearly ready to burst at the seams. 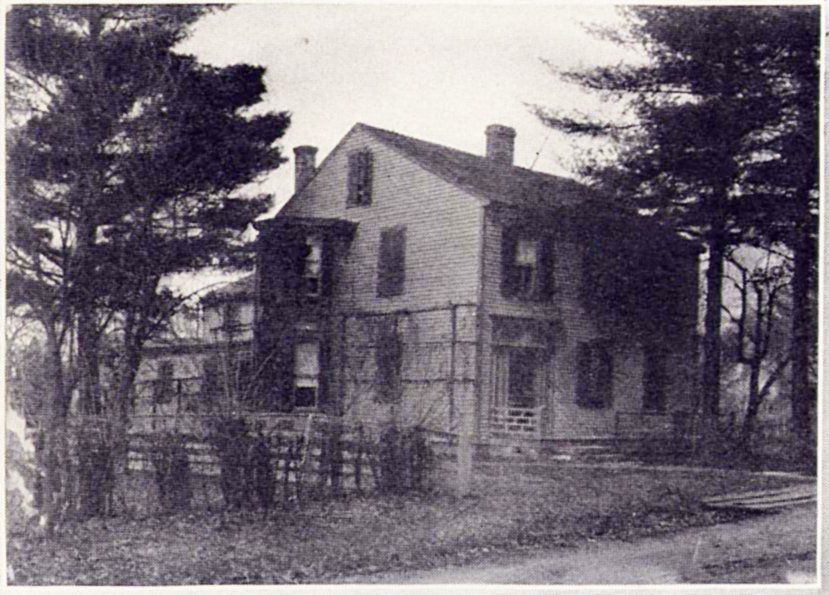 The next home south of Hovey’s is the Caleb Mills’ house shown above and still in its original location. 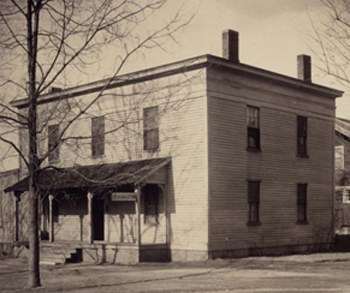 The third in the line of buildings is Forest Hall, or the old college, where the Sparks Center stands today. Forest Hall was originally built about six blocks north. After Caleb Mills was given the Dunn land, he disassembled Forest and had it moved to his land at the edge of campus. Some years later Mills donated Forest Hall to Wabash.

On the eastern portion of campus, listed as #6 on the map, the two buildings shown are Center Hall and South Hall, later replaced by Baxter Hall. 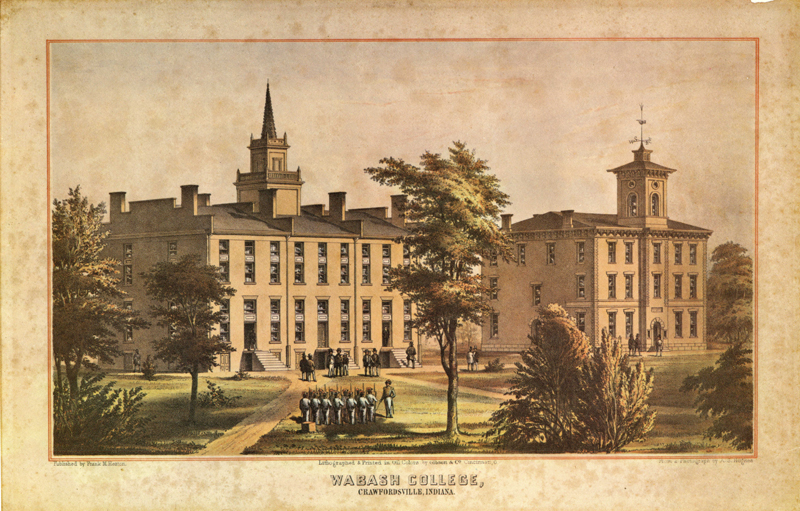 This lithograph is from the late 1850’s and it tells us a lot about Wabash. Let’s start with the two buildings – South and Center Hall. 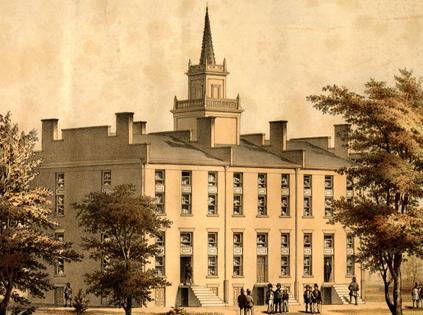 The building above is South Hall, the first built on the new campus. This building was originally four stories, but extensive renovations in the late 1800’s created just two floors and weakened the structure so badly that it was taken down in the early 1960’s. 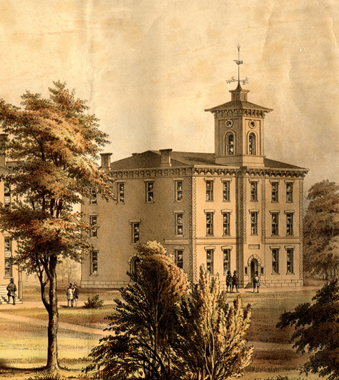 The building above is Center Hall without its wings. It would be many years yet before the wings were built. This is the front door of the College, as Center and South Halls were built facing Grant Street. The Mall at this time was a service area. Lastly I might add that the lithograph was created as if one were standing on the roof of today’s Fine Arts Center.

It is interesting to me to think about Wabash in that era. It was a very different place and it students were also quite different too. During the period from 1860-1865 there were six members of faculty, one of which was the Principal of the Preparatory Department, Atlas M. Hadley. While six members of the faculty seems so small to us today it was in proportion to the enrollment at that time.

Here is a snapshot of a typical term student enrollment.

We see from these numbers that the bulk of the enrollment was in the Prep and Normal departments. It was these students that kept Wabash going during the years of the Civil War. The prep students were simply too young to enlist. For several decades, from our founding until the early 1890’s, most of the men who attended Wabash were in these two departments.

The curriculum of this era was rather narrowly focused. If a young man wanted to attend Wabash, they had to be proficient in Latin and Greek studies. If a student’s family was well off, then a tutor would be hired to prepare the student. Most of our students went to the Preparatory School here on campus, which was a two year course. At the end of this course of study, the student would then be ready for the collegiate course.

There was also a Normal School at Wabash whose mission was to educate teachers. It was a three year program. In addition to the 3Rs, among the topics taught were book keeping – single and double entry, and one listed as, “The Art of Teaching.” Future teachers were a large part of the enrollment at Wabash.

There were three tracks at Wabash at this time. First was the Collegiate Department in which the students studied what we would recognize as a full liberal arts curriculum. This path took four years, much as it does now. There was also a Civil Engineering track where the students were training to be land surveyors and civil engineers. We were very stong in this line and it was hoped that Wabash might become one of the campuses for the Land Grant program. Instead, John Purdue gave land in Lafayette for the university that bears his name.

The last college level department was the Scientific which taught chemistry, mineralogy, geology, natural philosophy (physics) and astronomy. While many scientists were trained in this department, it was also a field of study for those men who had ambitions in the medical field.

There were three terms per year: fall, winter and summer. Here is an example of how the terms fell: Fall Term ran from mid-September until Christmas. With three days of finals right at the end, there was usually just enough time for the students to get home – typically only three or four days before Christmas. A break until just after the new year meant that classes were back in session in the first week of January.  This term was the Winter Term and ended in the first week of April, followed by several days of spring break. The summer term started in the third week of April and continued through to mid-July. At the end of the summer term Commencement Week  – which only lasted four days – finished the year. There was a summer vacation from mid-July until fall term began again in Mid-September. 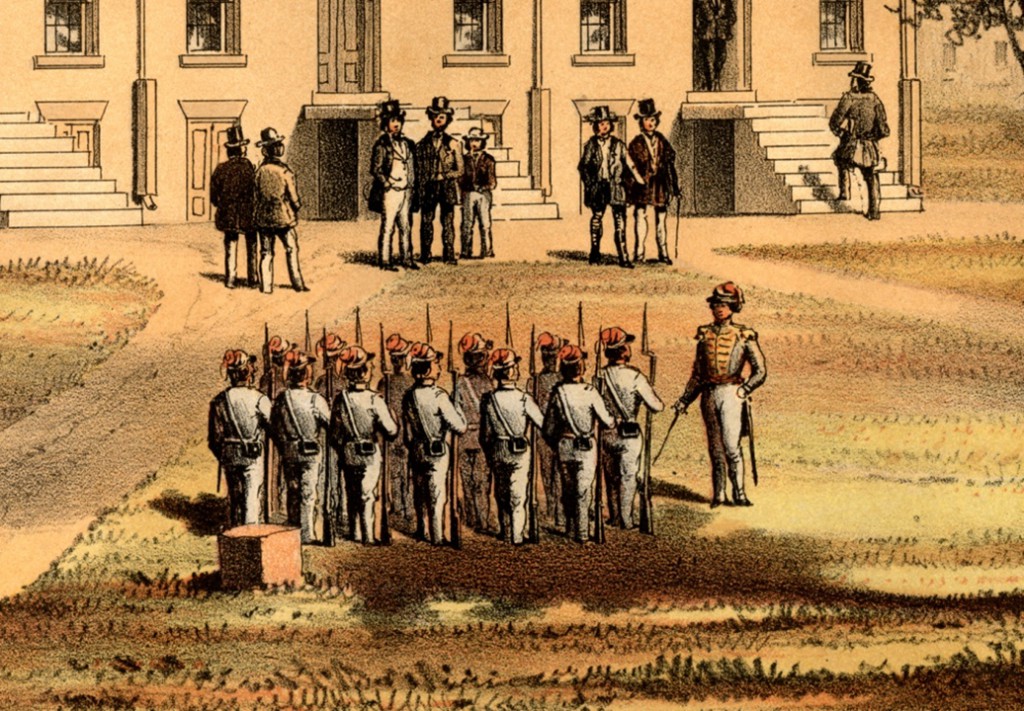 America in the 1850’s was growing ever more militaristic – partially a result of the Mexican-American war. In Crawfordsville, this was true as well. A nationwide trend that developed in this era was the organization of drill companies. Many veterans of the war with Mexico, including Lew Wallace, were eager to form companies. It was athletics – of a sort. Companies from one town would compete with another for honors. Training was rigorous and focused and appealed to young men – as it does today in other sports.

There was, at th

is time, no gym on campus. One student described the facility offerings as “two rings attached by long ropes to a maple tree, west of the dormitory.” There were no organized athletic contests. Sport was really down to foot races and wrestling in the dirt.

In 1856 Lew Wallace formed his Montgomery Guards and began practicing. Among the Guards were several Wabash students. They trained under Wallace and in 1858 they began their own company. To increase the draw for the College Cadets, there were fancy uniforms and competition.

This same former student added, “The cadets procured muskets from the Government, real sure-enough guns with bayonets attached.” The Cadets practiced by the hour and drilled against the Montgomery Guards. Chief among the skills they honed were practice in handling the guns, marching in formation and responding to bugle calls.

As a result of this drilling, Wabash became a sort of Officers’ Training camp. The skills they had honed in their hours with the Cadets placed them ahead of the untrained farmer or merchant when the Civil War started. Many of the Cadets became officers as they had knowledge of the drills and battlefield commands and maneuvers. Their ability to command men, march in formation and their knowledge of military tactics placed them at an advantage.  As an example in the Class of ’62 which had ten members, there was a brigadier, a colonel, four captains and a chaplain. 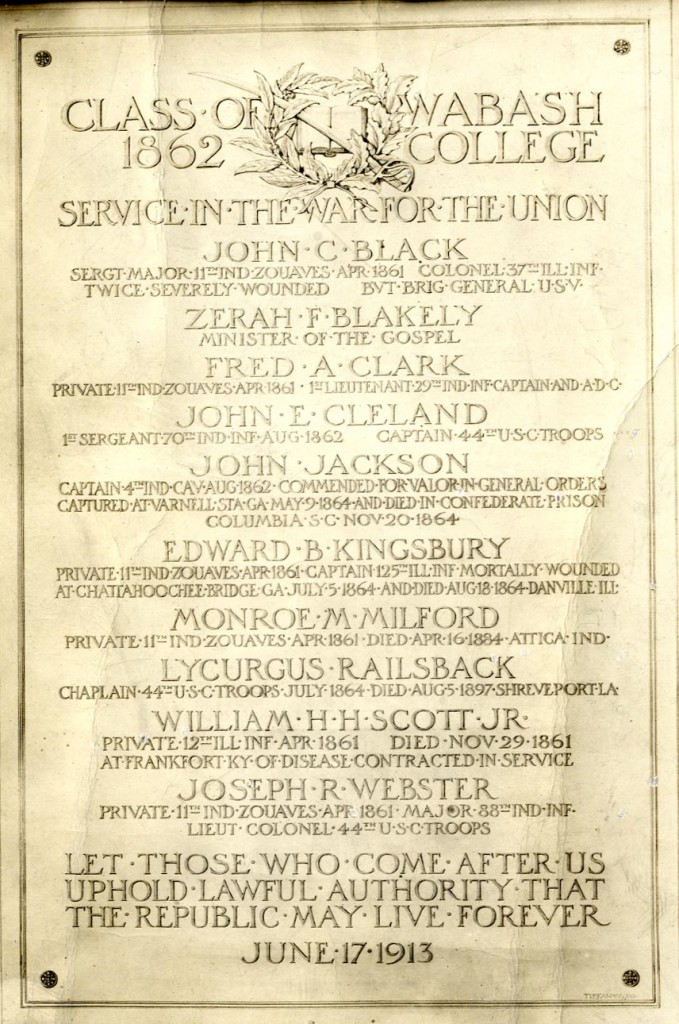 Wabash was staunchly abolitionist and while the faculty mourned for their former students who died, they were united in their belief that this was a glorious cause. Letters from Caleb Mills to various former students, now soldiers, indicate his strongly held beliefs. In the early 1850’s one member of our small faculty felt so strongly about slavery that he resigned his post here to devote himself to full time work with the Underground Railroad.

Wabash at the time of the Civil War was a very different place, but a great deal of that Old Wabash is still with us. The old buildings on campus are still here, if only they could talk! The students are still here too, although different now in many ways. Today’s guys are more tech savvy for sure, but still passionate about causes and interested in action. The faculty, now much larger and including women, is different too. But still caring about their students, watching them, wishing them the best, and inspiring them to greater heights. It is a different time now, but there is a very great deal of Old Wabash that is the same.

All best,
Beth Swift
Archivist
Wabash College
500 x 148
In their own words