One hundred and eighty years ago…

November has finally arrived in Crawfordsville. The Monon Bell game had unusually balmy weather but on Monday we returned to the grey days that I associate with Thanksgiving. At this time of the year the wind is sharp, the clouds are low and it feels like it could snow at any moment. It is a time to stay home near a warm fire. It is a time for reflection. November is not a month that I think of as a time for launching an ambitious new plan. Yet 180 years ago this month that is exactly what happened here in Crawfordsville, Indiana.  A determined group of Presbyterian missionaries and laymen, gathered at James Thomson’s brick house just down the street on November 21, 1832. They united to create a school in this “Wabash Country” for educating those men who would become preachers and teachers.

The story is well known to most members of the Wabash family, a story of determination, grit and providential events. It is also a tale of the men who gathered at that meeting. For a Chapel Talk by Emeritus Professor of Chemistry David Phillips on Edmund O. Hovey, a founder who served Wabash long and faithfully, click this link http://www.youtube.com/watch?v=so5eN1SFrBc&feature=plcp. 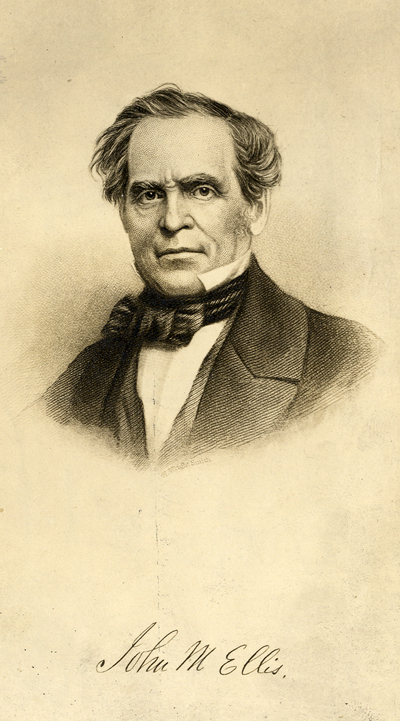 In this blog posting I want to look at another man who was at that meeting 180 years ago. John M. Ellis was born in Keene, N.H. in 1793. Ellis, like Edmund Hovey and Caleb Mills, was an alumnus of both Dartmouth and Andover Seminary. Ellis too entered the ministry and came to the West with a zeal for education. Ellis’ first posting was in Illinois and it was not long before he had decided to open a school of higher learning in the area.  Jacksonville was the area Ellis selected. He began by soliciting subscriptions and purchasing land. Ellis laid out a building and in 1830 Illinois College held its first classes.

In an effort to learn more about this driven man, I found a 1913 Wabash Magazine article about Ellis by Horace Carter Hovey [W1853], Edmund’s son, in which he describes the founding, “A little more than eighty years ago, namely, on November 21, 1832, five ministers and three ruling elders met at “the Old Brick House” in Crawfordsville, Indiana, with the design of establishing a college for the upper Wabash Valley. The ministers were James and John Thomson, Edmund O. Hovey, James A. Carnahan, and John M. Ellis. It is of the last named man that we would now more particularly speak; for the reason that his name is less frequently mentioned than those of his associates, although chairman of the meeting, and among the earliest to agitate the project for which the meeting was convened. It was also Mr. Ellis who led the band of home missionaries in prayer the next day, as they all knelt in the snow, after driving the corner stake for a building to be erected on the site given for the purpose by Hon. Williamson Dunn.”

Horace credits the impetus for the founding meeting to Ellis and continues, “In 1832 Mr. Ellis was first made an agent for the American Education Society, and the secretary of the Indiana Educational Society. In this capacity he took an active and prominent part in the deliberations that led to the founding of Wabash College. It was probably at his suggestion that the meeting at the Brick Cottage referred to was held, at which he presided and Edmund O. Hovey was secretary. A public meeting of citizens was held the next day, and a liberal subscription was started, Mr. Ellis himself being a generous donor. Although never officially identified with the institution, he retained his interest in it to the end of his days.”

“According to my recollection of him, Mr. Ellis was tall, very dignified and of a commanding presence. Yet as he visited at my father’s hospitable home his manners were affable and agreeable, and the impression made on my boyish mind was that our guest was sincere and simple-hearted.”

Such devotion and hard work does not come without a cost and in 1833 Ellis paid dearly. Again, from the 1913 Hovey article, “While laboring for the Indiana Educational Society, making long trips on horseback through the Wabash Valley, he met one day a man from Jacksonville, where he had not been for about two months, and asked him for the news. Imagine his distress on being told that his wife and children had died of cholera.” The cholera epidemic had hit Jacksonville hard taking ten percent of its citizens in this outbreak. Mrs. Ellis was an educator as well, running a boarding school for girls out of her home. Fifty years later a former student was moved to tears describing the death of a beloved teacher and her two children, “…all three being laid in the grave at the same time.” John M. Ellis was devastated and returned to the East for a time.

But Ellis’ contributions to the future of Wabash were not yet complete as it was during this time that Edmund O. Hovey had been sent east to raise money to fund the new school at Crawfordsville.  Horace tells the story, “It was at this period that my father went East for secure funds for the College, visiting in succession Baltimore, Philadelphia, New York, Boston and New Haven, barely raising enough to cover his expenses. Sitting in his room at the old Tontine Hotel in New Haven, he wrote his resignation of every office in connection with the College, signing it, ‘Yours at the point of desperation, E.O. Hovey.’ Just then Mr. Ellis called on him, and on hearing the letter read, said, ‘Do not send that; but go and see President Day, Professor Woolsey, and others of the Yale faculty, and hear their story of the early struggles of that institution.’

“As told by Dr. Woolsey, the Yale men advised him [Hovey] to try the rural places in New England. His first success was at Amesbury, Massachusetts, where he raised $50. Next came Newburyport, Massachusetts, where he raised $425. Thus he went from town to town, till he was encouraged to approach and secure, as President, Dr. Elihu W. Baldwin, at that time the most popular minister in New York City. Had it not been for the opportune encouragement given by Ellis to the weary agent who was “at the point of desperation,” Wabash College might have expired in its infancy, instead of being put on a firm and lasting foundation.” President Tuttle later remarked that, “If that letter had been sent, the college would have perished. It was not sent and Wabash College lived.” It was John M. Ellis again working in the interests of Wabash.