How do we know it is Monon Bell week? Well,  the bell is ringing from the Chapel steps,  students are sporting Mohawks while the email requests for Bell tickets are stacking up. In the spirit of Bell week, I thought I would share a piece of history about the Bell itself. Here is the headline from the Bachelor of November 18, 1932.

As you can see, we were pretty charged up about the game. Wabash had been playing DePauw in football for about as long as there was football in Indiana. Clearly, it was an old and established rivalry with a lot of heat behind it. But it wasn’t until 1932 that this game had a trophy. Here is the entire front page for the 11/18/1932 issue… 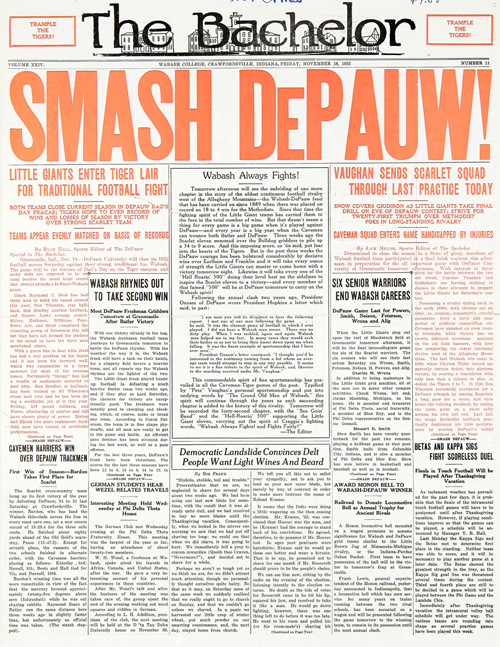 And right there at the bottom is this small story… 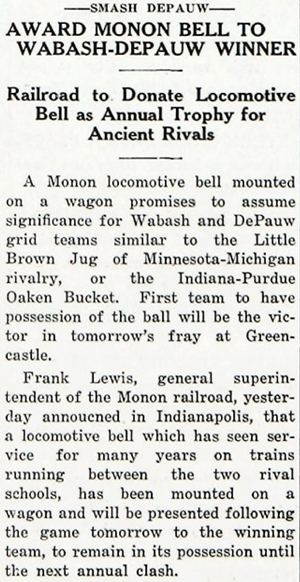 This is the advent of the Monon Bell as a trophy, 1932. Oddly enough the first game for the Bell ended with a tie. Neither side won it that first year. This seems to me entirely appropriate given the exceptionally close nature of the results for all Wabash/DePauw football games over the years. Neither team dominates in the 117 Games since 1890. The most excellent Wabash web site, “Monon Bell by the Numbers” lists the results as: