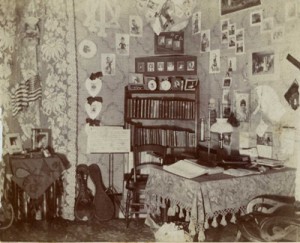 While working with some old pictures last week, I came across this little gem and had it scanned.  This is the room of James Ray Thomas [W1901] at 606 South Walnut Street for the school year of 1897-98. This would have been Ray’s freshman year at Wabash. It is interesting to note what was considered essential at that time. A mandolin, some pictures of a couple of Valentine beauties and numerous items identifying Ray as a Phi Gamma Delta man.

From the Wabash Magazine of Ray’s senior year, we learn that he came to Wabash from Raton, New Mexico and that he spent the summer before his senior year traveling in Europe.  It was his intention at that time to study medicine in Chicago immediately after his graduation from Wabash. We also learn that his mother of Raton, New Mexico and his sister, Miss Alice Thomas of Northwestern University, attended his commencement.

Among commencement traditions at that time was that the president hosted the senior class, either at a reception or at a dinner. For the Class of 1901 President Kane entertained in the building we now call Kane House, “On Tuesday, May 21, occurred the annual dinner given by President Kane in honor of the Senior class of Wabash, it being the first social affair given at the president’s new home on College Hill.”

Late in the first decade of the 1900’s the college sent out questionnaires to all of the alums it could reach. The responses are a real treasure trove of information about Wabash men as they faced the 20th century. Ray answered that, following his graduation from Wabash, he attended Purdue University earning his bachelor of science degree in electrical engineering. In 1903 he also accepted the position of Superintendent of the Crawfordsville Electric Light and Power Co. This fits with the listing from the 1912 Alumni Directory which shows him as the City Electrician.

I should add that one other item added to his items of general interest since graduation category was this, “Founder of the Purdue Chapter of Phi Gamma Delta.” He also notes that in 1904 he married Miss Mary Elizabeth Kenyon of Crawfordsville.

By1932 our directory shows him as President of the Thomas and Skinner Steel Products Co. located at 1120 East 23rd Street.

That is the last information that we have on this interesting young man with a passion for his fraternity and the sciences. So, now that we are in the Google age, I did a search on “Thomas and Skinner Steel Products Co” and through that search found this web site: http://www.thomas-skinner.com/history.htm

It seems that James Ray Thomas founded a company that lives on today. What a neat story from one odd little picture!