As I come and go in the Library I see things that catch my eye – some because they are clearly old, some because they are handsome and some simply because of their content. Down here in the lower level (okay, the basement) of the Library, while working in the stacks, I came across the Annual Cyclopedia. It is a handsome old set which has been beautifully bound. The year 1876 had been in my mind following an e-mail research request for information on the Centennial Exhibition and our faculty member John Lyle Campbell’s participation. I pulled the volume for 1876 off of the shelf to see the entry for the Centennial Exhibition. Held in Philadelphia to mark the 100th anniversary of the Declaration of Independence, the exhibition was open every day for six months, from May 10th to November 10th. The Exhibition was wildly popular and nearly 10 million people were admitted to the grounds. On display were the latest technological advances in science and industry. There were also individual displays of manufacture and agriculture from countries around the world. Twenty-six of the United States had buildings highlighting their natural resources and notable commercial achievements. All of this is notable because among the head management team of the Centennial Exhibition was a Wabash man and long-time member of the faculty, John Lyle Campbell [W1848] who taught physics, astronomy and civil engineering courses here at Wabash. 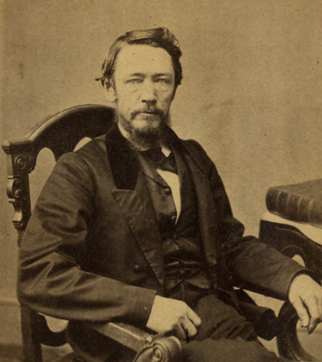 John Lyle Campbell had a national reputation for excellence. Following a lecture at the Smithsonian Institution on Galileo, Campbell suggested that a world’s fair might be a fitting way to celebrate the nation’s centennial and that Philadelphia was the obvious location. I should note that Campbell was not the only person who thought this might be a good idea, yet he was appointed Secretary of the event. 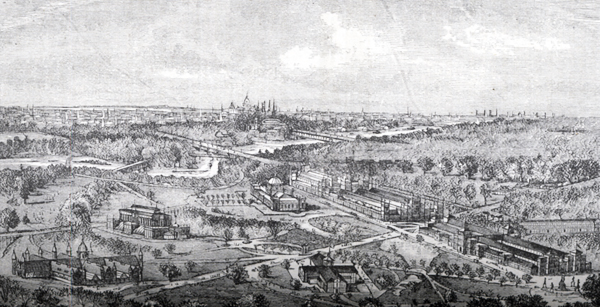 This first engraving is of the fairgrounds and we can see Philadelphia in the middle distance. The buildings included an Agricultural Hall, a Horticultural Hall, a Machinery Hall (with 14 acres of exhibition space), Memorial Hall, a Women’s Pavillion (which housed “the products of female industry and ingenuity of every class…”), and the largest building of all, pictured below, the Main Exhibition Building.

With 20 acres under roof this building housed the manufacturing, mining, science, education and metallurgy exhibits of all of the nations as well as the offices of the Exhibition administration. This was the building where Campbell would have done most of his work. Not surprising then that that he returned to Crawfordsville inspired by what he had seen of the possibilities of electricity. Indeed, all of the newest inventions in the world came to Philadelphia that year and right in the middle of all of this was our Professor Campbell. His good work was recognized by the Centennial Commission and he was presented with a gold medal (not here in the Archives), this great certificate ( a gift to the Archives from my good friend Jack Wyatt[W1958]) and a lovely cane (which we do have here) created from a piece of wood which came from Independence Hall. 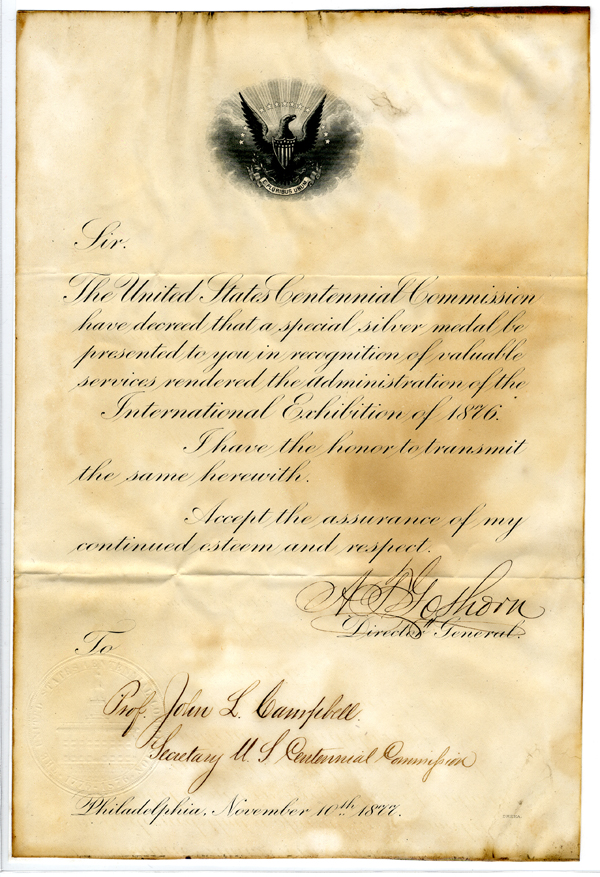 Campbell would go on to serve as Indiana’s representative to the Chicago World’s Fair, but most importantly he was the longest serving member of the faculty, much beloved by his students and a real inspiration to all who knew him.