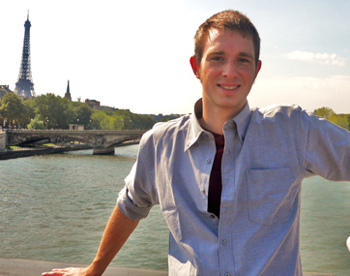 Reid Hepburn, with Eiffel Tower over his right shoulder, in Paris.

Reed Hepburn ’12 – Stereotypes are wonderful things. Yes, I realize that this sounds like exactly the kind of perspective that studying abroad is supposed to dismantle. But if you don’t believe me, try this: dismiss as myth every popular American notion about French culture and come spend a week in Paris acting on the assumptions of that model. Then get back to me. In my first few days here, I noticed evidence supporting every single stereotype I’d heard—the Parisian aversion to foreigners (especially Americans), general rudeness, widespread smoking, the bakery on every corner, and of course, the universal, hyper-keen fashion sense.

From my pre-departure research on Paris culture, I had learned a few tricks for blending in on the street—wear black, don’t make eye contact, avoid smiling, and never, EVER whistle. I followed this counsel, which was based on stereotypical assumptions, to great success. I was asked for directions by tourists almost every day in my first week here. A fellow US student in my program likes to wear orange and speak loud English. In his first week, he held eye contact for too long with a stranger, who graciously showed his disapproval by brandishing a knife. An anomalous example, yes, but you get the point… snare-snare, cymbal! If not for my preconceived notions, my adjustment to Parisian life would likely have been more difficult. 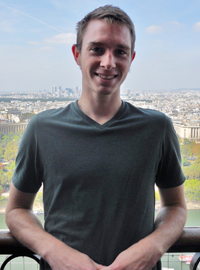 After some time, however, the apparent accuracy of my flagrantly American generalizations of this city’s people became somewhat troubling. After all, modern US media and academia alike incessantly preach against stereotypes, warning that these ideas necessarily foster prejudice and hatred. How could the stereotypes be right? Even more disturbingly to my post-C&T academic conscience, I soon came to develop my own generalizations. Parisians never hurry, raise their voices, draw attention to themselves, run, or laugh. Parisians never start conversations with strangers. Parisians never this, always that, etc.
Just when my list of “never”s and “always”s was primed to give Leviticus a run for its money, I witnessed what some would call divine intervention of the gods of social studies. All in the same day, I saw a group of girls laughing as they walked down the street, their conversation escalating until they were yelling over each other; I saw a throng of people rushing to catch their train; I saw a man running (and not to catch a baguette-thief, but for exercise); an unknown woman started a conversation with me; and- wonder of wonders -I passed a garbage man who was whistling as he collected the trash. This was about two weeks ago.

Since then, most of the sights of that day have proven to be rare, and in some cases, remain unique thus far. Nonetheless, the inner conflict between my observations and my assumed intellectual duty to disregard for stereotypes has been reconciled. I realized that stereotypes are called stereotypes, not facts or laws, for a reason. Anyone with a mustard seed of life experience can tell you that many stereotypes are based on generalizations that are, or were at one point, often true. There are always, however, exceptions, and that is what makes these ideas stereotypes. Nonetheless, as my experience here thus far has shown me, some of these can be extremely useful and should not be too hastily discarded from our mental libraries.

And, just for the record, Parisians are NOT, in fact as rude as their reputation suggests. As long as you gamely attempt to “parle français”, they will generally be more than happy to help out, whether you’re asking for directions, or they’re cooking you a scrumptious crepe. Additionally, Paris IS every bit as beautiful as they say. But that’s another post (or two) in itself. A bientot!