Jake Peacock ’12 – Black pudding is definitely NOT pudding, at least in the conventional American sense of pre-packaged little cups which are sack-lunch diet staple. I learned that the hard way this morning as I got breakfast in the city centre of Aberdeen, Scotland. For those who don’t know, black pudding is a traditional Scottish food served at breakfast and is actually a type of sausage. Blood sausage. It’s generally served alongside things like cold baked beans, grilled tomato, fried eggs, toast, and Lorne sausage. Lorne sausage is square. And delicious. However my reaction to black pudding was … well … visceral. To be honest, it wasn’t that surprising either. The British Isles aren’t really known for their food. But at least I’ve crossed black pudding off of my “traditional Scottish foods to try” list. 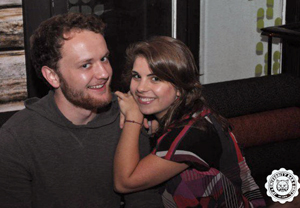 Jake Peacock '12 and a new friend in Aberdeen

In addition to black pudding and Lorne I have tried fish cakes, Scotch, a Scotland-only soda called “Irn Bru” (pronounced “iron brew”), an assortment of meat pies, and a few locally brewed beers. I have yet to try haggis.

So why, you might ask, would I start talking about this morning’s less-than-enjoyable breakfast experience with blood sausage instead of my overall fantastic time in Aberdeen? Partially because its a typical travel experience that most others who have studied abroad will understand. Also, because it wasn’t really unenjoyable so much as it was kind of an exciting adventure. Mostly, though, it is because it shows just how different this English-speaking country can really be, down to the smallest details. The most interesting thing about being here actually is that I have these constant, small reminders that this is not Crawfordsville, Indiana. I’m one townie who is very, very far away from home. The plant life is different, hamburgers taste different, credit cards don’t work quite the same, many people roll their own cigarettes, beer only comes in bottles or pints, and countless other things. That’s ignoring the big stuff, too. Those include driving on the other side of the road, the accents and slang (actually a “Jake” in Scotland is slang for an alcoholic), the fashion, the ever-present ocean and thus gulls, and the age of everything – many of my classes are in building older than the USA! This is all without the experience of a language either.

Thankfully, Aberdeen is very accommodating for international students. The Aberdeen Uni is at least 20 percent international students. In my own flat there are only two guys from Scotland. Excluding me, the others are from Bulgaria, Spain, and China. Many of the friends I’ve made are Polish or Swedish or Lithuanian. And, of course, there is my fellow Wabash man that is here this semester, Will Liu. In fact, the Scots are very friendly anyway, so perhaps this open social atmosphere is just a Scottish thing and not just Aberdeen. It’s my favorite thing about the culture here. Everything is about “being merry” and having a good time with good company and good drink (maybe why they don’t mind the black pudding so much) and ending the night with at least one or two good friends you didn’t know when you woke up this morning, regardless of nationality or political views or religion or whatever. It makes sense that people in Scotland so often say “cheers” instead of thank you and goodbye.

Unfortunately, the black pudding stopped me from making new friends today. I’ve felt too sick to go out at all. There’s always tomorrow.