Jingwei Song ‘15  – My German has been stretched extensively over the last three months. All my classes are in German, and I feel a little disoriented now writing about my experience in Heidelberg, in English. So bear with me, if there should be any grammatical mistakes. 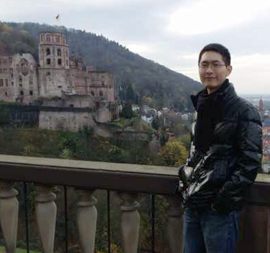 Song at the Heidelberg Castle

I live in a German fraternity house (Verbindung) which located in the center of Heidelberg’s beautiful old town. There are 28 single rooms, most of them are occupied by males. Girls are allowed to live here for up to two years, but they are not allowed to “pledge”, in other words, to become members of the fraternity. My predecessor, a student from Franklin and Marshall College lived in the house for a year and he has been admitted as a member, which is pretty cool. I am only staying for one semester and it’s too short for a “pledgeship”.

I still remember the first time when I walked into the kitchen. It would be a lie to say I was not nervous: I was just being dropped off to my room by a program staff and ready to explore the house a little bit. I could hear there’s someone in the kitchen. But what should I expect? Will they be able to understand my German? 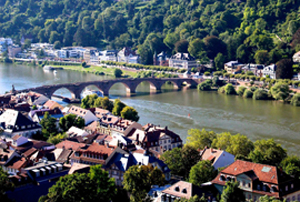 I summoned up my courage and pushed the door open. Upon seeing me, three German students(they are all my housemates) stopped talking and looking at me. There was a second silence and I started to introduce myself. We shaked hands with each other and they were all nice and friendly. One even tried to speak English with me after knowing I study in the US, which I politely turned him down and asked for an opportunity to practice my German. They were curious about how a Chinese went to college in the US and now studying abroad in Germany. My knowledge of German from Wabash was able to keep the conversation going, and I was flattered when they said my German was good.

The higher education system here is quite different from that Wabash. Heidelberg University emphasizes more on the autonomy of students. On one hand its size makes it difficult to offer close-knit academic community, on the other hand its budget is limited (Almost all German universities are state-funded, students at Heidelberg pay 150 euro registration fee per semester) Most classes meet once a week, and professors would rarely assign homework.  Throughout the semester, I got neither homework from my microbiology class nor marine biology class, plus no midterms. It’s my responsibility to understand the slides and prepare for the finals ( the professors are easy to talk with. German students usually take the finals in February. The Professors agreed to give me early exams since I need to return to the US early). It was quite a challenge to deal with big blocks of free time on my schedule. But soon I become a frequent visitor of the library to make the most use of my free time.

During the breaks I visited Paris and Prague, and will visit Amsterdam and Rome before flying back to the US. Of course, all the travels would not be possible without my parents’ financial support and also the generous scholarship from the Givens’ family (http://www.wabash.edu/international/finaid). I feel privileged and deeply grateful to what I got and one day I shall do my best to give back.

Andrew Detmer ’15 – Halò, a h-uile duine! Nollaig Chridheil! For those of you that don’t speak the lovely language that is Gaelic; that translates as, “Hello everyone! Merry Christmas!” As Christmas fast approaches, so too does my departure from the beautiful country of Scotland. While I look forward to returning home to my family and friends and the hallowed halls of Wabash; I am saddened to leave this amazing city and country behind. I’ve spent the past 3 months studying at the University of Edinburgh and have not regretted a single moment of it. As I sat down to write this blog and reflect upon my time here, the sheer amount of experiences I was lucky enough to have this semester washed over me. While I won’t have the time or space to write them all down here, if you ever want to hear more I’d be happy to regale you with tales of my time in Scotland over a lovely pint. 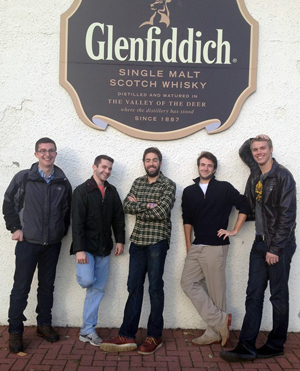 Visiting a distillery with friends.

The highlight of my time abroad was definitely my weekend I spent in the highlands of Scotland. While many of you might believe you have an inkling of their beauty and majesty from movies like Braveheart, the natural beauty and majesty of the highlands cannot be explained. We spent time in Glencoe, which might be the most beautiful but also most tragic places in Scotland. While during our time the lush green hills and vales were quite peaceful, on February 12, 1692 in the wake of the Glorious Revolution; members of the Clan Campbell massacred 38 MacDonald men and 40 women and children were killed by exposure to the harsh highland winter. The hatred of the clan Campbell is still alive in parts of the highlands, with one pub stating that “No Campbell’s allowed.” Our tour guide said that many an unsuspecting Campbell has found themselves ungraciously thrown from the pub before their meal could be served. Throughout our time in the highlands that was the consistent theme, while there was great beauty in the land it was also home to great tragedy.

Also during that weekend, we were able to visit the Glenfiddich single malt distillery. For those of you that don’t drink Scotch whisky, Glenfiddich is the largest and most popular single malt in the world sold in over 180 countries. Founded in 1887, the company has been operated by the descendants of William Grant, the founder, ever since. If I could convey to you the smell in the air when we arrived at the distillery, I would. However it was so full and hearty there is no way to possibly explain it, simply that if they made an air freshener with that smell I would use it every single day. Even those in our group who don’t like whisky were impressed and enjoyed our time at the distillery immensely. 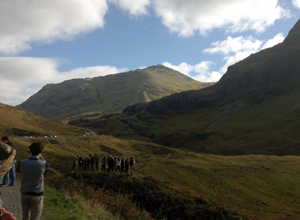 And while my vacations and explorations throughout Scotland have been amazing, my experiences as a normal “Uni” student have been equally impactful and amazing. Discussing the role of the frontier in American History with students from all over the world, many who have never visited America, was quite thought provoking. All of my conceptions and ideas were challenged in ways that simply don’t happen when I discuss American history with other Americans. Learning about wine and its global history from a professor who grew up in South Africa and has visited vineyards all over the world has been absolutely fascinating. Although much like Wabash, some of my best experiences have come outside of the classroom. I’ve spent the semester playing for the University of Edinburgh’s Ultimate Frisbee team Ro Sham Bo. They guys and girls I play with have become close friends, and I’m saddened to leave them and the camaraderie behind.

Overall this semester has been an absolute blast and important part of my academic and personal growth. I cannot thank all of the people at Wabash who make opportunities like mine possible. Wabash has given me so much and I cannot wait to begin to give back. Seriously.