John Decker ’14 – I have been living in Auckland, New Zealand for about two months now, and my time here has gone by quickly. Classes didn’t begin here until March 5, so I’ve only just gotten back into the swing of classes. Venturing to New Zealand has been my first travel experience outside of the United States, and the country is absolutely gorgeous. 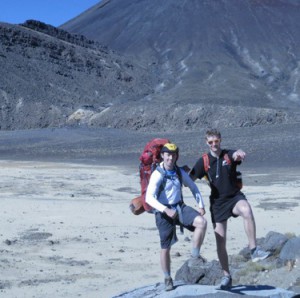 Decker and Kiwi friend at the summit of Mt. Doom

A group of my friends and I went to Tangariro National Park the week before classes started and hiked the Alpine Circuit. The three day hike was filled with beautiful scenery that included mountains, desert-like areas, and lush forests. One minute we’d be trudging uphill towards the summit of Mt. Ngauruhoe (the mountain used in Lord of the Rings as “Mt. Doom”), and the next minute, we’d be overlooking lakes scattered across the top of the mountain.  Once we reached the top of Mt. Doom, we were standing above the clouds and could see several mountain ranges distantly scattered throughout the horizon.

Culturally, New Zealand is not much different than the United States. Auckland is a very cosmopolitan city, with influences from Asia, the United States, and Europe. Just like any other big city, there is always something to do in Auckland. Whether it’s attending a professional rugby match in Eden Park, having a drink by the harbor, or going to a concert, the possibilities are really endless. The pace in New Zealand is a bit slower than the United States. New Zealanders, called Kiwis, are very courteous and friendly. Professors (called lecturers here) are very laid-back with the assignment deadlines and are very inclined to help out any students. I found this surprising for a university with 40,000 students! 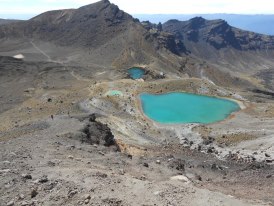 Auckland also has a perfect climate. I have arrived at the end of the New Zealand summer, and we’re currently entering the fall. As a Hoosier, I think of fall as a season with temperatures ranging from 45 to 65 degrees. Well, in New Zealand, the temperatures regularly reach 80 degrees and generally only get down to about 60 degrees. The weather here is ideal for those who have a zest for the outdoors. Spreads near my living unit are parks, rugby/cricket pitches, and plenty of jogging trails.

I’ve been doing my best to get the full New Zealand experience. I have been playing for Grammar Carlton Rugby Football Club, a strong men’s rugby club affiliated with the Auckland Rugby Football Union. I take a bus to practice every Tuesday and Thursday and games are usually played on Saturdays. I have been playing with the Under 21 side for the team.  It’s an interesting experience because I am the only North American on the 120 man club. There are ruggers from Fiji, Tonga, China, Northern Ireland, Holland, Australia, South Africa, and England, just to name a few. Sometimes there are some language barriers (even between us English speakers!), but we’re all there for the same reason: to play rugby.

Over Easter Break, I’ll be in Hamilton, New Zealand, staying with one of my Kiwi friends. Over mid-semester break, a big group of us are flying to the South Island to do some hiking and check out all that the South Island has to offer. After about a week of exploring, we’ll fly out of Christchurch (a major city that was devastated by earthquakes in 2008).

This has been a great experience thus far. To current/future Wabash students: I hope you take the opportunity to study abroad. Studying abroad has always been a big goal of mine, and it has exceeded my expectations.