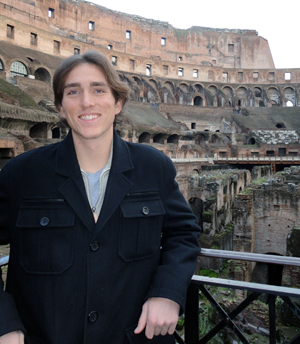 Chet Turnbeaugh ’14 – There are few better places in the world to study Creative Writing and Analytic Philosophy than the University of Oxford. Simply strolling down the High Street is enough to fill one with a renewed sense of wonder and inspiration.  When in Oxford, it seems like anything is possible.  If London is the world in a city, then Oxford is the world in a school.  Consisting of 38 unique colleges, the University becomes eclectically broken into a congregate of Hogwartsian type institutions, each with their own cozy personality. My college suited me well, St. Catherine’s College.  Built in the 1960’s, it is highly modern looking and considered by some to be an abysmal architectural failure. Still, some optimists, myself included, hold that the yellow walls of St. Catherine’s dining hall and the Americanesque dormitories help give Oxford fresh form.

Sometimes in life you need a castle—most of Oxford’s colleges look like castles. I, on the other hand, needed a chance to get away and get a fresh perspective on my life, my goals, and the reality of what is doable in this lifetime, and where some of my dreams will have to be cut short. The chance to sit and talk with leading researchers, PhD students, and other intellectual eccentrics was absolutely fascinating.  Half the time I expected either Lewis Carrol’s Alice, or Tolkien’s Frodo, to pop out from behind the dreamy sandstone spires and strike up a conversation with me.  While very magical, nothing of the sort occurred during my stay in England. I did get a chance to meet new friends, eat pounds and pounds worth of traditional English dish, enjoy snapping my fingers to jazz on George Street, and discuss poetry at St. Catherine’s.

After term concluded, I was able to travel to Paris, Barcelona, Rome, and Glastonbury, England.  Prior to studying abroad, my worldview was small and my self-view was stuck in the way of me seeing the bigger picture.  Standing atop a stone tower in Barcelona, overlooking the entire city, a mesmerizing light drew my eye.  Hundreds of meters above us was another, even larger hill, with a magnificent church perched like a twinkling star on top.  At the top of every mountain lies a higher peak somewhere beyond in the distance. Now, with my world a bit bigger, and my self a bit lighter, I’m ready for the next peak.

I had many conceptions of what I would do and whom I would be when I got to Oxford, but after being there for a while I realized that there is no right way to be an Oxford man, so long as he is his own man.  I recall having a similar realization about what it means to be a Wabash man early in my freshman year; this Wabash spirit has never left me. Being on my own was an experience that I have always wanted, but never been able to have until now. I am truly grateful to have been given this brilliant opportunity!