Pete Robbins ’12 – This past weekend I went to Strasbourg with four friends.  It is a city on the Rhine, bordering France and Germany, and the biggest city in the province of Alsace-Lorraine, which has been a contested region between France and Germany for centuries, and most recently during the Second World War.  It is therefore a unique place, with a dialect (a distinct language, rather) called Alsacian.  It is also the seat of the European parliament. 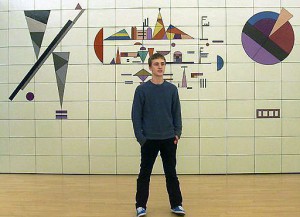 This photo was taken at the Strasbourg Museum of Modern Art in front of a recreation of a work by Kandinsky.

Strasbourg is known for its imposing cathedral for which construction began in the 13th century.  While standing in the nave, all I could think was that when I visited Abraham Lincoln’s log cabin birthplace in Kentucky, they celebrated that tiny, still standing, “ancient” 19th century building.  Notre-Dame de Strasbourg has been, by far, the tallest building in Strasbourg for centuries.  And cathedrals as big or bigger than it are all over France.

I guess my point is that I am amazed by this country, and very happy to be here.  I am staying in Paris in a single apartment in the 14th arrondissement.  My program is called IES Abroad, and every morning I walk about 20 minutes to school – I can take the Metro if it is raining but it’s such a short distance that it’s a waste of time.  To write about the appeal of Paris would be redundant, so I won’t do it.  I assure you, it is appealing.

Back to Strasbourg (after all, traveling is one of the best parts of study abroad) – we visited the Modern Art Museum which boasts two Picassos, a room full of Kandinskys and a Gauguin.  We also went to the international museum for illustration, named after the Alsacian illustrator Tomi Ungerer.

Other trips I have loosely planned include a trip to Belgium in March, and I will surely go to Spain and Switzerland while I’m here to visit some friends.  My program offers trips to places within a reasonable distance from Paris, including Giverny (Monet’s home), Reims (where the French kings were crowned) and the Normandy beaches.

To making new friends, eating great food, becoming a pedestrian and waiting to climb the Eiffel Tower until it gets warmer.  Cheers!

Kris Paltanavicius ’11 – This past summer I was given the Dill Grant to go back to Lithuania where I had my artwork dislplayed at The Ministry of FLUXUS–the biggest avant-garde art center in the country. The display was called “Higgs Boson” in which a number of different aesthtics and mediums merged together into over twenty large collages. My experience of putting an exhibition together as well as observing audiences’ reactions to my artwork inspired me to  start working on my next series of arworks. I decided to continue to work with the concepts of collage and portrayl and make this exhibition a narrative about fifteen different emotional stages. My portrayls focus on different layers of thoughts and emotions which is why I called the display 15 Dimensions of My Mind. In my collages, I combined the concepts of mandalas, medieval paintings of the noble and some Renessaince art aesthetics. 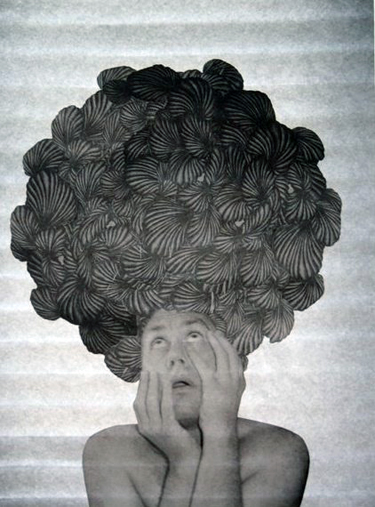 15 Dimensions of My Mind mostly consists of my drawings and photographs that I never thought I would use. The display was a challenge for me, as an artist, to look back at my previous sketches and reinvent them. It means that all the cllages really reflect on a number of inspirations that I had at different times of my life. I did most of the drawings while still in high school, and some of them are more recent, thus, the exhibition also reflects on my own growth and changes of ideas. It also resonates with the idea of the exhibition being the journey of the protagonist—me–seen in all the portrayls. The character in all the collages discovers himself exploring different emotional states and delibaretly taking it to the extremes. The monochromaticity of all the pieces opens a surreal space where the protagonist of the exhibition experiences contrasting emotional and mental states.

I was really happy when the Lilly Library agreed to host my exhibition which allowed many people on campus to see my artwork. After I displayed 15 Dimensions of My Mind at the library, I felt compelled to share my art with more people. Thus, I started communicating with Kim Van Arsdell at “The Athens of Indiana” where they are currently showing seven of my collages. I feel really honored to have an opportunity to show my art at a professional art gallery while still in college. I am the first undergraduate artist to display artwork at the gallery which makes it very special to me. I would like to invite everybody from Wabash to see my collages at the Athens of Indiana. Also, I hope that it will inspire more Wabash students to make art and have it displayed at the gallery.