Tyler Griffin ’13 – “You’ll be back with tears of defeat and then you will know that college is no place for you.” The bell rings and I throw my hoodie over my head and let the warm saltiness slip from the corner of my eyes. The rowdiness in the hallways seems to deafen as I precariously walk through my soon to be high school Alma Mater. Three weeks from graduation, eyes set on Wabash and my teacher whispers this into my ear. Some memories never seem to fade. 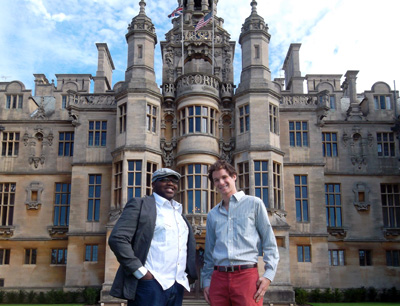 Fast-forward to Monday September 5, 2011, “Congratulations Tyler Griffin you are the new Harlaxton College Student Body President.” In addition to booking trips to the Netherlands, Germany, Italy, Ireland and Portugal like the rest of my fellow abroad students, I will be in charge of running Harlaxton’s student government.  Luckily, I will not be running this alone, but rather with fellow Wabash student, Michael Jon Mondovics ’13 who was elected Vice President.

Student government is a bit different in Grantham, England than at Wabash College. Funds are extremely limited and finding people to forgo trips to Ibiza in order to stay and help with a charity event isn’t easy. I have a small team of around 7 people who are in charge of overseeing philanthropy, pep rallies, talent shows and a host of other both recreational and educational events.

Yes, there will be times when I will be organizing capture the flag tournaments, instead of exploring the emerald fields of Ireland. Fear not though, not only is this professional development, it is directly beneficial to my success at Wabash. Tyler Griffin and Michael Jon Mondovics officially announce their candidacy for Student Body President and Vice President for Wabash College in Grantham England, next stop Crawfordville, Indiana. This experience will render some great strategies and tactics hopefully we can employ at Wabash if we were so fortunate to be elected.

My responsibilities have increased exponentially, but with that come greater rewards. I will create deeper relationships with students, learn more about my leadership abilities and find ways to better them. Freshmen Saturday is but a distant memory that continues to aid me in my journey into becoming a true Wabash man. “Sometimes we do things that are not necessarily better for you, but will inspire others into greatness.” President White’s words continue to echo even as I travel this “brave new world with such people in it.”