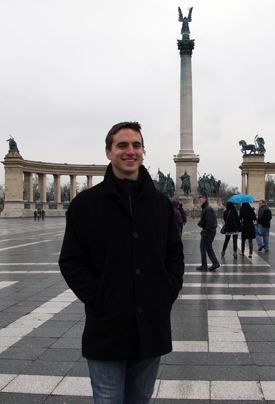 Kristofer Klondaris ’12 – My month of intensive language training in Vienna is over and my time spent in Austria has been far more eventful and far different than what I expected. I have, through a combination of chance and a curious disposition, been exposed to a huge variety of things that one should hope to experience while living abroad including art, architecture, langauge, food, ideas, modes of political/social thought, and so on.

In only one month I’ve managed to eat gulasch in Budapest, drink Riesling in Slovenia, cruise along the Danube in the Wachau Valley, and, of course, sip on countless Grosse Brauners (a typical Viennese style of coffee) at most of the big-name Viennese coffee houses. (Well, they’re big-name to certain crowds; usually the artist, the tourist, or the aristocrat; and by aristocrat I mean the real-deal aristocrat: the fur-coat flashing elderly widow who pulls up to the cafe in her Rolls Royce for her afternoon coffee and cake.) And yes, the Viennese coffee is actually as good as everyone says – far better than the watered-down stuff we get in the states at any rate. 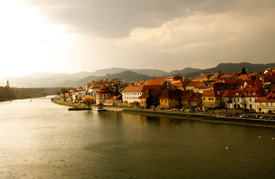 The Maribor River and town

In addition to indulging in the coffee, taking intensive German classes (between 3 and 6 hours every day), and seeing the sights in my free time, I’ve also become acquainted with a good mix of European students in my Studentheim (student residence). The students in my hallway, of which there was one from virtually every European country, were generally eager to get to know the only American on the floor.

There were a number of long nights spent in conversation about cultural values relating to everything from compulsory military service to the price of gasoline. This exchange of ideas was almost, if not more, valuable to me than simply observing the big tourist attractions. Of course, getting out to see an opera or bargaining in German at the Saturday morning flea market are valuable parts of a good study abroad expereince, but a deep cultural exchange between a small group of people is just important in my mind. 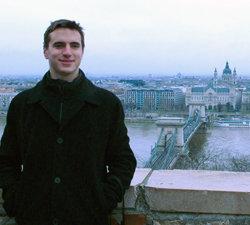 But, the relationships I’ve formed in Vienna have been cut short, as I’m now moving to Marburg, Germany to do a do a full-time semester at Phillips University. While my Wabash brothers are wrapping up their semester, I’m just about to get started with mine. At Marburg (a university town with a population of 80,000), I’ll essentially be living the life of a German college student by taking three full-time university classes, all taught in German. I’ll also be doing some language courses on the side to keep my grammar up to par.

Although seeing Vienna was a great experience, I’m looking forward to settling down in quiet Marburg for a more down-to-earth experience; an experience which will allow me to truly get to know the students and the local culture. I look forward to partaking in a similarly deep cultural exchange, but without the commotion and glamour that adorned Vienna. Vienna is truly a great city, but I’m leaving it now with a handful of great experiences, a much broader knowledge of the German language, and an increased yearning for the tranquility of the German countryside.

Yangnan Liu’12 – Being the hub of the fashion industry, New York is constantly changing its styles.  Chic New Yorkers represent the latest trends in fashion districts like SoHo and Fifth Ave. No one (at least in Manhattan) puts on sweatpants and a big college logo hoddie to go out. Most people are seriously well dressed and our convenient ‘Wabash casual dress code’ is certainly not acceptable in these trendy areas.  Thus, this leaves me another opportunity to discover the fashion attitude of New York City.

I am not a fashion expert and working in an advertising agency does not require me to dress creatively every day either.  For most of the time, I just put a clean and nicely pressed shirt for the top and wear my dark jeans or khaki pants with my favorite sneakers (yes, I am allowed to wear sneakers in the office and creative people can even put on their colorful flip-flops in the summer time).  My outfit clearly labels me ‘the College Intern’ and it becomes almost natural for my new colleagues to start a conversation with me by asking which school I go to.

I noticed several little things that ad men are crazy about. Almost every male creative guy, ranging from graphic designer to chief creative officer, carries a Jack Spade messenger bag. This simply designed, mid-sized accessory usually signals which department the owner belongs to and further proves that even the most creative thinkers are sometimes keeping a simple mind. On another hand, Brand Planners always favor The North Face pack bag. Strategic planners are more concerned about the functionality and durability of a bag thus sports/school bags that include a lap-top layer and are able to handle heavy weight become very popular. (Well, their choice of the brand The North Face might also be due to the client-agency relationship of DDB Worldwide Global Network).

The scene of ad men dressing in suit and tie in the sixties show MAD MEN is no longer existing on Madison Avenue. Every day is ‘casual Friday’ here at DDB and sometimes even the CEO wears jeans to work.  I really enjoy the laid back working environment here but this does not mean people do not get busy. I would be lucky to get off at 5pm during the week and sometimes I have to work with other planners till 8pm (when compared with banking interns, I feel much better though).

It’s almost unreal that this semester will come to an end in less than a month. I feel like I have not seen the spring of New York yet! Hope the weather is going to constantly get nicer so that I could enjoy the city a little bit more during my last few weeks.

Kenny Farris ’12 – Some people look at the world around them and take a picture of it.  Others look at their world and want to build something: a large farm in the country, a castle on a hill, or a factory in the depths of the city.  Each view has its own purpose, and there’s no simple answer as to which action is more desirable. 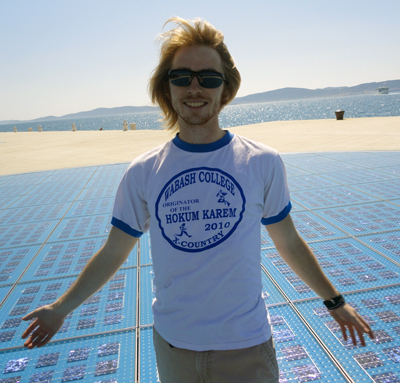 Through my nearly three months abroad, I’ve often looked at the world around me and thought about running.  Even though I’m away from Wabash for an entire semester, I am still a Wabash College Cross Country and Track & Field athlete.  My personal and team goals don’t fade away with a temporary change in location and being away from the team.

Fortunately for me, Harlaxton College has been a great place to train.  Set out in the countryside of England, I can run on country roads nearly void of traffic, a dirt towpath along a canal stretching 30-plus miles, or the mangled network of public footpaths through sheep pastures and small villages.  Harlaxton College lies in a valley between two ridges, and most of my routes take me over at least one of these ridges, if not both.

In foreign cities I search for parks and green space so I don’t have to run down crowded concrete streets for an hour.  In London I’ve twice run in Hyde Park and Kensington Gardens, using a four-mile perimeter loop as the base for my runs.  My hostel in Krakow, Poland, sat nearby a 2.5 loop around the old city and connected with a river footpath that extended six miles one way without street crossings.

Not every foreign city has good running, as often times cheap housing isn’t close to a large park or green space.  I found a canal footpath in Dublin, but it seemed to be a hangout for jesting alcoholics easily entertained by those wearing running shorts.  I couldn’t explore trails in Croatian woods near Zadar, as signs warned me of potentially active landmines.  Even so, slipping on my shoes on a Saturday morning often works well for a daily run, as tourists and locals normally don’t greet the morning sun and I’m not changing group travel plans. 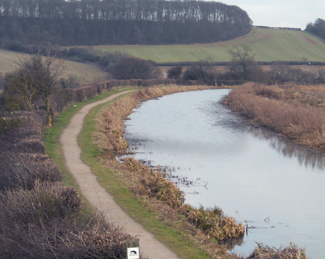 A running/walking path along Grantham Canal

I’ve traveled three places specifically with running in mind.  In January I visited Iffley Road, the Oxford track where Roger Bannister became the first human to run the sub-4:00 mile.  There I saw not a tourist attraction but rather an active athletics club for the Oxford campuses, pleasing me that such a personal place of pilgrimage still retained its essence as a place to race fast.

I journeyed to Birmingham in February to watch a professional indoor track meet.  Meet participants placed five world-leading marks at the time, but the highlight of the meet was the finishing 5,000 meter men’s race, where Brit Mo Farah broke the European indoor record for the distance with the help of American and training partner Galen Rupp.  The two men provided little flash and remained stoic throughout the race, looking fit.  Simply put, they just ran fast.

March led me to Punta Umbria, Spain for the World Cross Country Championships.  I expected to see a race, spend maybe a little time in the beachside resort, and end by returning back by train to Seville for my return flight.  Through a chance meeting on Ryanair with a club manager in London, I found myself a free ride to the race and back while talking about Division II and III running (which very few Brits understand).  That string of luck would have satisfied me, but at the race I met members of the club, including the childhood coach of Charlotte Purdue, the top European female finisher in the women’s senior race, and briefly chatted with her as she warmed down draped in a Union Jack flag.  I discovered that 11 of the 24 British athletes competing in the race had connections to this club, named AFD, and I watched the race with parents, coaches, the manager, and other club runners.  I definitely could not have planned or expected such chance meetings with hospitable strangers!

With this and my solo training, I can’t wait to return to campus and begin training with the team again.  I feel renewed, refreshed, and more confident in my own ability to find the will within myself to race as fast as possible for Wabash College.