Sovann Kho ’19—They did not allow me to take pictures of Westminster Abbey in London as soon as I step in the front door. It did not really bother me at that moment. However, when I went in, it was so hard to hold my phone down. I found my favorite Gothic style architecture.

Westminster Abbey is beautiful and is the representation of Britain power, pride, and inspiration. The interior wall and nave of the building is so decorative. The ratio of the dimension is so well calculated and constructed that the space seemed small. The nave is so high up as it is reaching into space. In addition, Westminster Abbey expresses Britain power. The floor is full of the tombs of important people such as artists, royal families, and leaders. Not very surprised, Westminster Abbey becomes the place where kings and queens get crowned. The enormity and the firm standing structure in the middle of London seem like it is the root of the entire place. Moreover, while I was standing in the middle of the building, I felt a sense of pride and inspiration. I am very sure the awesomeness of this building does give the British people a sense of pride of being British, and I would feel the same if I were British. Personally, the architecture inspired me to strive for something big and great although I am not sure what I want to strive for yet. I am sure it also gives the same sense to the young Britain as it did to me as well. Westminster Abbey amazed me, and it is the Britain power, pride, and inspiration.

I am really thankful for the Givens family and Wabash College for giving me an opportunity to sense the world in a different perspective. I was able to study Gothic style architecture in the UK and learned how important those art forms are in the UK.Westminster Abbey, for instance, is very important to the British because it represents their art and culture, and especially, it is where the kings and queens got crowned. I would not have this rare opportunity without the help from the Givens family and Wabash College.

Art History in Italy and Greece 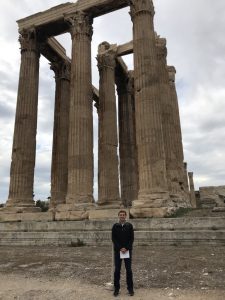 Temple of Zeus in Athens

Jonah Woods ’18—My trips this past fall, thanks to the Givens Award were eye-opening experiences into vastly different periods of history and allowed me to appreciate what art has meant to generations over the years. While studying at John Cabot, I took an art history class covering the ancient monuments in Rome. We covered sites used for entertainment, the arts, and daily life. To complement the monuments in Rome, I travelled to Athens, Greece and other parts of Italy with the help of the Givens Endowed Scholarship.

I travelled to Athens in October, and the most important constructions I saw were on the hill of the Acropolis of Athens and the Temple of Zeus down below it. Both places were built in honor of the gods they worshiped, all with different meanings and respective styles. In my class back in Rome, I was able to compare the Acropolis and Temple of Zeus with the Roman Forum and the Temple of Jupiter. Although many years passed between the artwork in Athens and Rome, they still erected enormous monuments in honor of their gods, a practice we continue today. These experiences helped me see that the structures were tools to show the permanence of the culture (or so they thought); the Greeks and Romans tried to prove they were here to stay by building these incredible complexes.

After Athens, I went to Siena and then Florence to look at Renaissance era artwork. In Seina, I saw the historical Cathedral of Saint Mary and the work from Bernini, Donatello, and Michaelanglo inside. I was fascinated most by the work of Donatello, which manipulated bronze (an incredibly hard metal) into rugged, course-like clothes and hair. As I later saw at the Accademia Gallery in Florence, Michaelanglo pushed the boundaries of sculpting in his David. He added movement to his pieces in a unique way that was divergent from the popular artists of his time.

Thanks to the Givens family and this award, I was able to see these works of art and how they compared to other pieces over the years. I am so thankful for the opportunity to travel to these wonderful places, and would suggest that anyone who has little or no background in art to do the same. In all of the places I was able to see during my time abroad, these places were the most special because of the extra involvement I was able to have with the arts. I would like to thank the Givens family for the experience of a lifetime.

Cal Hockemeyer ’19—Having the opportunity to spend a semester 4,000 miles from home while pursuing my education was perhaps the most intellectually enlightening time of my life. Having to adapt to another culture while learning and taking classes in a second language was an incredibly enriching experience that will affect me for years to come in more ways than I can possibly predict. One area in which I really grew during those four months was in my understanding and appreciation of the visual arts. Due to the unwavering generosity of the Givens family, I was able to supplement my classroom education by traveling to Paris, Rouen, Giverny, and Amsterdam to see some of the world’s finest paintings.

The art movement that I was primarily concerned with studying was that of the impressionists, so it was only natural that I visited Paris. The first museum I visited there was the Musée d’Orsay, home of the most highly renowned collection of impressionist paintings in the world. This collection contains paintings from the most important of the French Impressionists, including Manet, Pissarro, Degas, and Monet. Some of my favorite paintings in this collection include Monet’s La gare Saint-Lazare and La rue Montorgueil.

While in Paris, I also had the opportunity to see the Musée Marmottan Monet as well as the Musée de l’Orangerie. The former has a large collection of works from the different parts of Monet’s life while the latter houses Monet’s eight Water Lilies murals. The Musée Marmottan Monet also contains paintings that Monet collected throughout his lifetime, both from close friends such as Pierre-Auguste Renoir as well as the Japanese prints which had a great influence on Monet’s craft. Here, I was able to see not only how Monet’s subjects and style changed over his lifetime, but also the types of works he admired and drew inspiration from. The massive Water Lilies paintings displayed in the Musée de l’Orangerie are spread across the walls of two oval-shaped rooms. Monet painted the murals during the last years of his life at his Garden in Giverny.

It was only fitting, then, that I took a trip to Giverny to see for myself the garden which appears in hundreds of Monet’s works. Though it rained while I was there, it was an incredible sight to behold. The lily garden was especially breathtaking in the rain. During the same weekend that I visited Giverny I was also able to see the Musée des Beaux Arts in Rouen, which is the home to an exhibit of paintings from French Impressionists such as Caillebotte, Sisley, and Monet. It is also the city in which Monet painted his Rouen Cathedral series, a collection of 30 paintings depicting the outside of the Rouen Cathedral at different times of day and in different weather conditions. This series exemplifies how Monet and the impressionists were able to paint in such a way that emphasized the moments rather than the subjects they were depicting.

The last location that I visited was Amsterdam, where I spent time in the Rijksmuseum and the Van Gogh Museum. Home of many of the world’s finest works of art, the Rijksmuseum houses a small collection of impressionist paintings that includes a couple of Monet’s works, as well as artwork form the Amsterdam Impressionists. These artists were influenced by both the works of other Hague School artists in Amsterdam and the French Impressionists. My favorite painting from this exhibit was In the Month of July, a work by Paul Gabriël which depicts a windmill on a sunny day in The Netherlands. Seeing the Van Gogh Museum was a great way to supplement the rest of my excursions because I was able to see how the impressionist movement inspired Van Gogh, greatest of the Post-Impressionists and one of the most revered artists of all time.

Going to these exhibits wasn’t the only thing I did during my semester abroad to develop my understanding and appreciation of art. While in Heidelberg, I enrolled in a class called Visual Art and Language, through which I was able to build a foundation that allowed me to better understand the techniques and tools artists use to speak through their art. While in this class, I was assigned the task of giving a presentation over any artist of my choosing and a few of their works. Naturally, I chose to present over Claude Monet. While presenting (in German), I gave a small background detailing the goals of the impressionist movement and the techniques they used to achieve them. Because of my experiences outside of the classroom, I was able to confidently give an informed summary of these subjects. Additionally, all of the paintings that appeared in my presentation (La rue Montorgueil, La gare Saint-Lazare, Coquelicots, and paintings from the Rouen Cathedral series) were works that I had seen in person during my excursions. The presentation was the perfect culmination of everything that I had learned throughout my excursions, art class, and study of the German Language.

I would like to say thank you to the Givens family for providing me the means which allowed me to embark on this incredible journey of self-discovery. I can say with the utmost sincerity that it has enriched my education and growth in ways that I would have not been able to pursue on my own. Through their unwavering generosity, the Givens have given me – as well as a multitude of other Wabash men – experiences we will never forget.