Matthew Hopkins ’19 — As I reflect back on my four months abroad in Aix-en-Provence, France, I realize how formative a time it was for me. I realize how much I’ve grown, I see the things I’ve learned – whether academically or culturally, and of course I was able to improve my French a bit too! It wasn’t always the easiest at times, but my journey abroad was a positive growing experience that I will carry with me for the rest of my life.

In addition to my academics and cultural assimilation in France, a big reason I was even able to go abroad in the first place was thanks to the Givens Scholarship, which I was awarded the semester before I left.  The Givens Scholarship paid for my travel and admittance fees to several museums and historical sites around Europe. Thanks to the Givens, I was able to travel to Berlin to study German expressionism, Paris to study the French impressionists, and many things in between. Before I went abroad, I laid out a plan for what I was going to do with my award money. Though I had to cut a few things out once a got there, on account of the ongoing strikes in France which cancelled many trains and planes I had scheduled, my main goal for the Givens Scholarship was to explore the connections between Impressionism and Expressionism – a goal I feel I was able to reach (or, at least, I beganto reach).

I would like to talk about one specific trip I was able to take thanks to the Givens Scholarship.  About mid-way through the semester, I travelled to Paris, and one of the museums I went to was le Musée de l’Orangerie, to see Claude Monet’s “Water Lilies.”  “Water Lilies” is regarded by some as the masterpiece of Monet, the French Impressionist. When you see it, it’s understandable why some would make that claim. First, the way they were presented – something Monet was very specific about. The painting, in its entirety, spans 8 massive landscape canvases, and these canvases are arranged, in order, around the perimeter of two ovular rooms, which are connected by a small walkway. Picture an infinity symbol shape as a room, and the walls in that room are covered in Monet’s art. The experience of entering that room is one that words could never do justice. Ethereal is the only descriptor that comes close.  The rooms are full of people, but strangely it doesn’t feel cramped – perhaps because the paintings themselves open up an entirely new world that you cannot enter physically, but are still somehow pulled into. Each room has benches in the center, and I sat here for what seems like hours (could have been), just following the stories on the walls.

We were not able to take pictures inside the “Water Lilies” room, and to be honest I think I preferred that. I decided to include a picture of me, standing in front of Mont Saint Victoire, which was the subject of hundreds of paintings by another French Impressionist master, Paul Cézanne.

I would like to thank the Givens family once again for the chance to expand my learning outside the classroom, to be able to see pieces of history in the flesh, and draw from them lessons no textbook could teach me.

Granada Cathedral. Gold and mahogany Wood that came from the Americas during colonial times.

Adam Zink ’19 — This summer I have been able to expand on my studies as I focus on my Hispanic Studies major in Granada, Spain. During my time at Wabash, I have taken courses over Latin America and several different aspects; historical, food, economics, and religion. All of these topics fascinating in their own way, but I felt like something was missing. I didn’t have much knowledge about Spain in the precolonial and colonial times, thus sparking my desire to learn more about the history of colonial Spain. Fortunately, with help from the Rudolph family, I was able to make it happen.

For the months of June and part of July I have been in Granada, Spain.  My time here in Granada has been the best.  In the midst of learning about the present day culture and tradition it is hard to overlook the past as my study abroad program provided my classmates and myself the opportunity to visit several major cities in our region. Granada is in southern Spain but we made trips to Sevilla and Cordoba then eventually made our way down to the coast in Nerja and Tarifa which led across the Mediterranean to Morocco. All of these cities had their own specific features that made them beautiful, but you could see the difference in the cities based on their historical significance. Sevilla for example, was closer to central Spain and during the colonial times served as the trade center of the goods from the New World. The traces today are in plain sight as there are old embassies from every Latin American country.  Also in Sevilla, the Real Alcazar de Sevilla Cathedral contains remains of Christopher Columbus.  Then my temporary home of Granada served as a vital pre-Columbian city as it was the last city to be recaptured by the Catholic Monarchs King Ferdinand and Queen Isabella. The historical significance of the city was abundant. The people and culture screamed the history this beautiful city had.

La Alhambra, an old fortress turned fortified Muslim city was one of my favorite places to visit. From on top of a small mountain, the old city of La Alhambra had a great view of the city of Granada and its neighboring mountains La Sierra Nevada. In both of the city markets and the style of the old building you could see the influence of the Spaniards, Africans, Muslims and Catholics. The markets flowed with African and Muslim themed artistry while the restaurants showed the Spanish Catholic influence of pork through Iberico Jam. Through the history I could look at modern day Spain and observe the mixing of the religions and people and how Spain still retains a lot of its historical marks and truly how fascinating those pieces of history are. 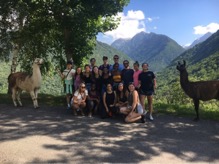 Charles Frey ’19, Toulouse, France — Mark Twain wrote in The Innocents Abroad, “Travel is fatal to prejudice, bigotry, and narrow-mindedness, and many of our people need it sorely on these accounts. Broad, wholesome, charitable views of men and things cannot be acquired by vegetating in one little corner of the earth all one’s lifetime.” After spending four weeks in Toulouse, France for my summer study abroad, I would agree with Mr. Twain. The amount I grew, both in the French language and in my world view, continues to surprise me. Through my coursework, excursions, and evenings spent talking with my host family or mes comarades des classe around a glass of wine (rosé, usually), I’m always learning something new.

CIEE (Council on International Educational Exchange) offers two courses in Toulouse for the summer months – Business & Culture (BC) and Language & Culture (LC). I was in the LC class with nine other students learning about French national identity, history, education, and many other facets of French culture. Through these classes we connected what we know (i.e. American culture, identity, politics, history, etc.) with the content taught in class and I realized every day that humans are more alike than different. This goes for the positive and the negative, and currently both nations – France and the US – are tackling similar wicked problems, from immigration to women’s equality to LGBT+ acceptance in society. Like I said, more similar than it seems, even from across the sea.

Aside from the class, our program offered an overnight excursion and several cultural activities in Toulouse and elsewhere. Our whole group, BC + LC, went to Ariège for an overnight trip, where we dined at a small, family run foie gras farm, walked llamas in a mountain village, spent the night right outside the Pyrenees, toured a pre-historic cave (with caveman drawings not unlike those seen in the Bachelor), and visited a castle. It was a jam packed schedule but completely worthwhile, filled with experiences and memories I know I’ll cherish for the rest of my life. In Toulouse, we cooked a French meal as a group with a professional chef, went to Le Capitole for Fête de la Musique, and listened to an opera recital. This was all within the first two weeks!

Grand Place in front of the town hall.

Freeland Burton ’19 — During my time in Europe this summer I was able to visit many once-dreamed-of places that I never thought I would see in my lifetime.  I studied Business and Sustainability in Amsterdam, Netherlands, which was a wonderfully unique city that provided an opportunity to explore something new every time I turned the corner.  Some of these opportunities came not from just Amsterdam, but other cities too.  It was a Saturday, July 21st, when I happened to overhear some of my study abroad colleagues mention that they were planning a day trip to Brussels, Belgium, for the following day.  I thought that it was good to expose myself to as much as possible while in Europe, so I of course decided to travel with them.

The day trip consisted of a very early morning bus ride, a city tour, and a lot of walking.  We started in the Grand Place, or the central square of Brussels where we got to walk around the town hall.  I have always been a fan of gothic style architecture, but this building was undoubtedly a masterpiece.  Actually, our tour guide told us a very funny story about the town hall.  The east-wing (to the left when facing the front) was built and originally completed long before the second half.  Once a need for craft guilds arose, an expansion of the building was planned.  When construction started, they realized there wouldn’t be enough room to make the town hall symmetrical.  For this reason, one side is shorter than the other.  Even more unbelievable, our tour guide told us that a building not 200 feet away was where Karl Marx wrote the Communist Manifesto!  These were connections I would have never made without our wonderful tour guide.

We also visited the Royal Palace, which had some of the most intricately designed rooms I have ever seen in my life.  There were multiple times I had to take a moment simply to bask in the glory of the place.  Extravagant chandeliers and bizarre art pieces were everywhere, but the room that stuck out to me the most was filled with millions of bugs.  This room was given a makeover in the early 2000s, covering the room with 1.6million iridescent green beetles.  The chandelier was covered by these beetles as well which formed one of the most curiously beautiful objects.  Light reflected off of these bugs created a warming green color in the room, and proved to show the creativity and expertise required to create such magnificent works of art.

Later that day we took the bus back to Amsterdam and got ready for the week ahead of us.  Spontaneous trips like this one were only made possible thanks to the generosity of the Rudolph Family.  I am so very grateful I was provided this opportunity because it taught me so much about myself and the rest of the world.  Everything on my trip from the class to sightseeing was an unimaginably terrific learning experience.  I gained a greater appreciation for the simpler things in life… like a ceiling covered with a million beetles.