Sky King ’15 –  I was recently given the opportunity to travel to Morocco and though Spain neighbors the North African Country getting there was quite the adventure. The program I was taking to get Morocco was geographically about as far away as you could probably be from Valencia and still be in Spain. 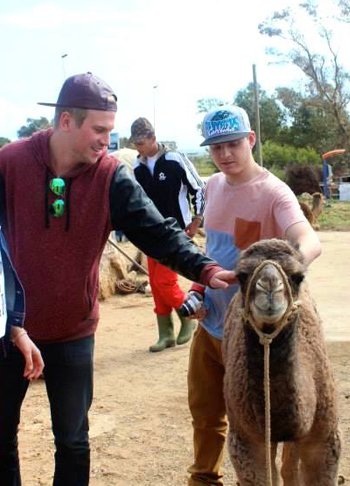 King ’15 checking out the baby camel

We decided to try something new and instead of traveling in an aeroplane, a bus or a train we used a rideshare program called Blabla car. The day we were supposed to leave for our trip we still didn’t have a ride, but luckily one finally popped up. Our driver was to be a man named Said M, a native Moroccan who had spent the last 15 years in Spain working. He spoke Spanish, French and Moroccan Arabic (A distinct form of Arabic). I had a hunch that the reason Said was working for this company and why it was so cheap for us to go so far was because Said was working in Spain illegally. To go from Valencia to the door of our hostel (about a 9 hr drive) was only going to to cost us 36 euros… not bad at all. After quite a few pee/pray breaks (Said is Muslim and therefor five times a day he rolls out his carpet and does his business. It was an extremely interesting juxtaposition to see this done at gas stations and truck stops.) We eventually made it to our hostel in Seville/ Sevilla and headed out for some tapas and a cerveza or two.

We met up with one of my best friends from back in California and went out for some mojitos. After a great night of reminiscing we eventually made our way back to the hostel. In the morning we got up and broke some bread with some backpackers from Australia. I saw that one of them had a tube of vegemite and knowing my friend was likely a virgin to the Australian delicacies enquired if we may proquire some. In typical Aussie fashion he was extremely excited to watch our faces as we tried their favorite spread. Scott, (Wheaton Friend) did not make past his first bite. Vegemite… always an icebreaker.

In order to get to Morocco we took a four hour bus ride from Sevilla and then a one and a half-hour ferry ride across the Gibraltar Strait. Unfortunately, for most of the passengers on the ferry we crossed in a bit of a storm and by the end of the ferry ride the bathrooms were unenterable. Despite the nausea I was able to befriend a group of girls who were studying abroad in Barcelona and who originated from San Diego State. I was excited to be back with some California friends, but even more so when I realized I shared at least one mutual friend with all of them. (If my abroad experience has taught me anything it is how small this world really is… this was not the only instance in which I ran into someone that shared a mutual friend on the Moroccan adventure. I met a girl who went to Depauw and was best friends with our Track/Cross Country star Jarred Burris)

By the time we arrived at our hotel it was pretty late and we were all tired and hungry. I had a nice dinner where I ended up sitting with three girls who came from a single sex college as well. Conversation came easy as we bonded over our mutual love/hate relationships that we felt towards our alma mater. After dinner it was straight to bed. 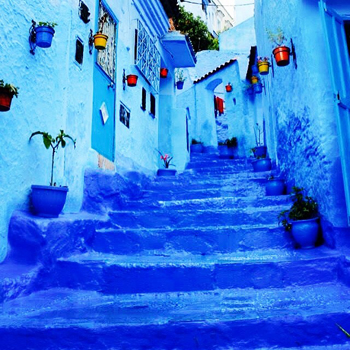 We left at 8 a.m. after a lovely breakfast (something that has been missing in Spain) and hopped on the bus for a three-hour bus ride to Hessilah, the blue city (see photo, at right) I was extremely shocked by the diversity of the landscape in Morocco. I think most people from the US ignorantly think of Africa as a giant desert. Though Morocco is one of the homes of the infamous Sahara desert, northern Morocco is mountainous, green and stunning.

The bus ride went smoothly, the only hiccup was the passing of the King of Morocco which has a caravan of about 30 cars. All Land Rovers and Mercedes as well as about ten police escorts.  It was quite the sight.

By the time we got to Hessilah we were anxious to get going and quite tired of our guides horrible puns. He started with “welcome to Hessilah, it is quite Blue-tiful” and went downhill from there.

The first thing I saw as we summited the mountain were the strange blue buildings. The majority of Hessilah is covered in a strange blue dye whose inconsistent color makes it seem as if the city is a giant waterfall made even more impressive due to the rain that was pouring down all around us.

The second striking image I saw were all of these little people running/ standing around with these strange pointed hoods. The current style in Northern Morocco is to rock these coarse wool hooded coats and to where the pointy hood upwards. I did end up snagging one for myself. They are woven on a loom and for such great work they were approximately 20 euros.

One of the most interesting parts of my trip to Hessilah was the people there. At one point during my trip I purchased a pack of oreos. I was carrying them with me when suddenly a little boy who was selling bracelets came by and ask if he might have an oreo. Of course, without a second thought I gave him one and went on my way.  About five minutes later I saw the boy again and he was still eating that one oreo slowly nibbling and very obviously enjoying his snack very much. I was a little saddened by this, but was able to push it from my brain until a few others boys came up to him and they looked to be in the same if not worse condition than the other boy. When they realized he had an oreo I honestly thought for a second that it was going to get violent, that was until the boy with the oreo pointed over in my direction placing me as his benefactor. As you can imagine the boys rushed over all asking and holding out their hands. Luckily, I had enough left that each could have one, but I am not so naive to think that these oreos did any sort of good. The faces on these boys were tragic. We talk about not having equal opportunity in the United States and I agree we can always do better, but when I see these boys I really get a sense of what type of problems there are out there in the world. And these boys were clothed, not clean by any means, but not sickly and they had all of their limbs.

I flew back into Valencia on Monday morning about thirty minutes before my first class. Made it through the day well and had a blast at soccer practice. I went home to have dinner with my host family and thats where it all really hit me. I walked into the living room and I saw my three Spanish brothers. They are thirteen, nine and eight. The oldest has already done a year abroad in England they attend a private school five minutes away from their house, have a maid which cooks their lunches and does their laundry (I will confess to being a recipient of this as well) and two parents who love them dearly and grandparents who see them every day.

When I walked into the living room the site I saw was what really put me in my place. The eight year old was playing the new Call of Duty for PS3 on his 3D TV. The nine year old was on his fathers iPad playing a tower defense game and the oldest was watching music videos on their giant iMac.

The juxtaposition between these two worlds was one of the most real and awakening experiences that I have ever had. My Spanish Brothers are great. They are kind, funny and outgoing. They do not know the world in which they live. I didn’t know the world that I lived in. That is essentially the message I am trying getting across here. We, all of us, need to travel more, we need to see these things, see the beauty that exists in the world as well as the pain. We need to see that there are real problems. We need to understand that the average person can make such a huge impact. Because when someone literally has nothing the smallest gift goes along way. And helping people and solving these problems isn’t charity and shouldn’t be viewed as so. When we give people opportunity we invest in them and by investing in them we are investing in humanity. Which, no matter your race, gender or religion is something that you are apart of. We are one. We too often forget that.