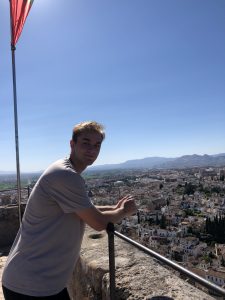 This summer, I had the opportunity to study in Granada, Spain at the University of Granada’s Center for Modern Language. It was an incredible experience that helped me grow as a student and citizen of the world. I took classes on the history of Spain, art history, and Islamic history and culture in Spain. I enjoyed classes thoroughly. The professors were friendly, accommodating, yet challenged all of us in our practice of Spanish. My classmates were primarily fellow Americans, with a few from other European countries. Aside from my usual in-class studies, I was offered many opportunities to broaden my knowledge of Spanish culture. I visited several art museums, went to flamenco shows, and regularly met professors or friends for churros or Arab tea. Also, I took part in a weekly cultural exchange program, where people of different cultures met at a pub or restaurant to hang out and better their language skills. This was an incredible experience. In one meeting, I talked with people from Belgium, Norway, England, and Germany about anything from sports to different schools of philosophy.  I had planned to go to Granada last fall, so I had been dreaming of this trip for almost 2 years. I thought that the pandemic had eliminated my chance to study abroad, but the Rudolph Scholarship made this amazing experience possible. 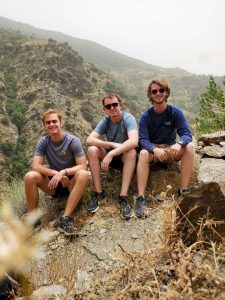 I lived in a residence hall, which consisted of about half American and half Spanish students. I was initially nervous about living in a dorm as opposed to a host family, but it was one of the best decisions that I have made. Everyone became fast friends and the Spanish were eager to get to know us and show us the city. Through them, we were able to meet many of the locals. We were constantly together when we weren’t in class. We explored the city, studied together, went hiking, and had watch parties for the European Championships. We also traveled together. One weekend was spent in Malaga, relaxing on the beach and visiting landmarks such as Pablo Picasso’s childhood home. Another weekend, we visited Barcelona to see the Sagrada Familia, Parc Guell, and spend more time on the beach. These people were the most valuable part of my experience in Spain. I spoke far more Spanish with my friend group in the dorm than in class or class excursions. Also, getting close with a group of complete strangers, from drastically different places, taught me a lot about myself and opened my mind to new ideas. Some of them will surely be my lifelong friends. I will always be thankful for the opportunity to live with such amazing individuals. 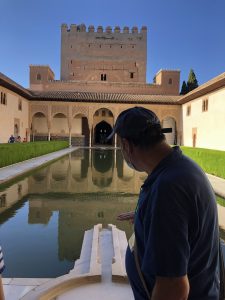 This is one of my professors, Aurelio, as he leads us on a tour of the Alhambra. The Alhambra is the most famous landmark of Granada, and one of the most visited sites in Spain. The fortress served as the capital of the Granada Caliphate, the last Muslim kingdom in Europe before the Moors were completely expelled from southern Spain. The intricate architecture and artwork of the Alhambra were incredible, but the visit wouldn’t have been nearly as enriching without Aurelio. Aurelio had written and illustrated a picture book about the Alhambra which we followed on our tour, and I am confident that he was more knowledgeable than the official tour guides. Aurelio was my favorite professor and a large part of my experience in Spain. Every day, he would teach class without much structure or a class plan. He would simply talk about the Islamic history of Spain off the top of his head and have a conversation with the class about what interested us most. It always felt like we were just hanging out, yet I am sure I retained more information from that class than the others. Aurelio also incentivized us to take interest in Arab culture outside of class. He conducted his meetings with students at an Arab tea house and, one day, he offered me extra credit to wear kohl eyeliner to class and explain its significance in Arab culture.

I learned a lot and made some lifelong friendships in Granada. I cannot think of another time where I have learned and done so much in such a short period of time. I am immensely grateful to the Rudolph family and Wabash College for giving me this transformative experience.

All thanks to your family’s generosity and support towards the Wabash community, I was afforded the opportunity to take a virtual study abroad course over the summer. Due to issues caused by COVID-19, I was not able to travel abroad; however, since I’m a Spanish major, the Off-Campus Study Committee and my academic advisor had encouraged me to participate in a virtual study abroad experience, which has been made common now because of the pandemic. This specific course that I took entitled “Spain and the Americas: From the pre-Columbian period to the present” covered material about the main pre-Columbian civilizations, the discovery of America, both the Spanish and English colonization of the Americas, the colonial era, the Cuban revolution, and much more. I shared a virtual classroom with five other students and Professor Delgado who is from Sevilla, Spain and gave his lectures in Spanish, exclusively. To my surprise, I found that myself and fellow classmates were more engaged and involved with our daily discussions than what I would’ve expected given the circumstances and limitations of our classes being entirely virtual. The high expectations set by our professor inspired deep and constructive conversations analyzing a wide range of topics such as the unity of Latin America or the economic/sociopolitical conditions between the US and Cuba.

Even though I was never physically able to visit Spain, my professor’s spirit and passion towards teaching and improving our understanding of the Spanish culture certainly managed to compensate for this obstacle. Many of our assignments incorporated not only lengthy, Wabash-like readings and discussion questions, but often included virtual tours and slide show presentations of the historical sites pertaining to our in-class discussions and debates. As for the assignments themselves, all of my homework assignments were to be submitted online, and my oral presentation over the architecture of pre-Columbian civilizations was also submitted virtually via a PowerPoint slideshow recording. I believe that while there would’ve been benefits to taking classes in person – in my experience – the virtual experience offered me a wide variety of courses to choose from, allowed for effortless access to my professor, and improved my self-discipline / technical skills which ultimately afforded me with an unforgettable experience that tailored to my needs all from the comfort of my home.

This was an opportunity that will always look back on blissfully and one that I will never take for granted. From this experience, I have grown a deeper appreciation for the diverse, rich, and complex cultures present throughout Latin America, and have been acquainted with many admirable students and an influential mentor in the process. Thanks again Rudolph family for being a part of what makes Wabash so remarkable, and for supporting and inspiring us students who hope to one day pay your generosity forward. 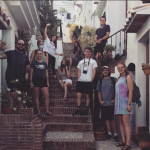 I would not have had as great of an experience had I not met some incredible people to enjoy the experience with.Each person in my program resided from their own corner of the United States, and none of us having met each other before, fell perfectly into a functional friendship. These were the folks that motivated a spontaneous trip to Córdoba to see the Mosque – living away from home is one thing but planning trips around was a daunting task I would not have been comfortable doing alone initially. In our time together we also met numerous locals that introduced us to unique experiences and made us feel comfortable so far away from home. In this picture, we had just hiked up the hills of Falange to get a view of the city and take a photo. This day was special because we got to eat paella on the beach, explore the local shops on our own, and enjoyed a game of volleyball against some locals. 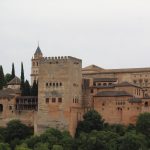 It isn’t a trip to Granada if you don’t visit the Alhambra. This was an incredible experience that brought to life the connections I was making in the classroom. I recall vividly standing in the Generalife, imagining myself hundreds of years ago enjoying the castle on a hot summer day. The view from the watchtower was phenomenal and highlighted monuments in town like La Capilla Real or the old walls that surrounded the city. 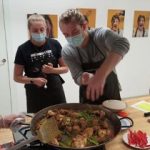 One thing that I found unites everybody is food! I had the opportunity to take a cooking class that was also a Spanish learning class. We made chicken and rabbit paella, homemade sangria, and gazpacho, which called for an incredible dinner that evening. When we would go out to eat, I particularly enjoyed croquetas, which appear like a hushpuppy but are filled with delicious Iberian ham and seasonings that reminded me of an Easter dinner. The seafood, especially calamari, was not like anything I have tasted in the U.S. before and made me appreciate the Mediterranean gastronomy. Spanish tortillas, essentially egg, onion, and potato, are a cheap belly filler and go great with salted tomatoes for lunch. 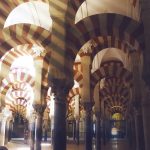 Finally, I want to mention visiting the mosque in Córdoba. The beautiful colored arcs with unique column designs predates the large Catholic church centered in the middle of the building by centuries. This drastic switch made for an incredible tour of the ancient place of worship and brought to life the tale of the requisition. As this was a hot topic in my classes, it was rewarding to visit and see for myself what we were learning.

I would recommend anyone thinking about studying abroad to apply for this scholarship and find a program because this was an experience that changed my perspectives indefinitely. I am beyond grateful for the Rudolph family’s gracious contribution to my education and for an adventure of a lifetime.