This past weekend, a group of nine students from the UVA Valencia program decided to go to Seville for the weekend. We arrived late and were locked out of the hostel, so we crammed into a more expensive hotel for the night.

The next day, we were met by Andy Goodwin ‘97, my high school Spanish teacher. Andy is on sabbatical in Seville, writing and interacting with Spaniards while his wife, Jamie, teaches English at the university. 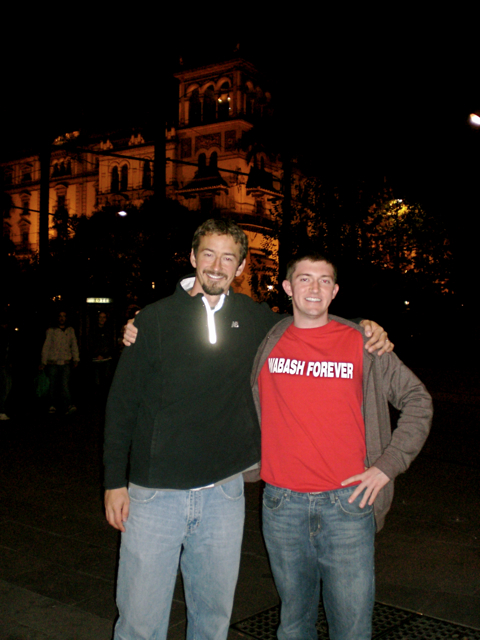 Don Andrés just after the 47-0 Monon Bell Victory. It was a good night for Wallies everywhere.

Our first stop was la Catedral de Santa María de la Sede, dominant feature of Seville and the largest Gothic cathedral in the world. When planning the church, the builders resolved to make the building so large that those who saw it would think they were crazy. And it was crazy large… and climbing the Giralda emphasized the cathedral’s size. In true Spanish fashion, a ramp leads to the top of the Giralda to allow the bell-ringer to ride a horse to the top of the tower. 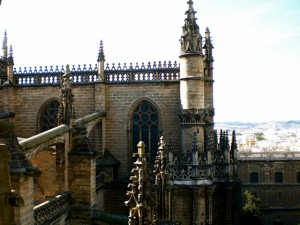 After some delicious tapas, we went to la Plaza de España, the gorgeous group of Sevillean government buildings. Apparently the location was featured in one of the Star Wars movies, though they chose to admit the murals of Spanish provinces (below). The excessive amount of walking prompted a prolonged siesta until heading out to the flamenco bars for the evening. 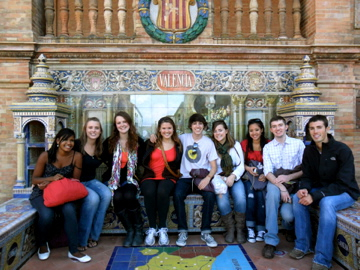 The next day was spent lazily wandering the 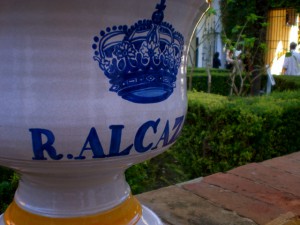 Alcázar, a Moorish fort converted into a 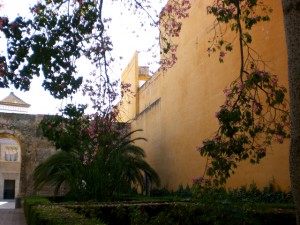 palace for a variety of monarchs and filled with their paraphernalia—from the Padrón Real to a collection of fans used by the queens. The gardens were beautiful (at this point, my words fail, so I’ll let my less than adequate pictures take over).

That evening, we headed to the European Film Festival and watched Nieves Arrazola: lucha clandestina, cine y lentejas, a less-than-gripping documentary on life of 91-year-old Spaniard Nieves Arrazola. She spoke on her disillusion with communism, encounters with great artistic figures of the Spanish-speaking world (including Buñuel, a personal favorite), and her cooking methods. Click for the trailer, the shorter and more exciting version of the movie.

After a night of laughter, story-telling, and tapas, I began my long trek to the train station at 7:20 in the morning (that’s exceedingly early in Spain). On the train home, I caught up on sleep, did some homework, and saved about $50 in travel costs.

Later that week, myself and two other UVA Valencia students returned to the Spanish law firm of Ángela Coquillat Vicente. There, we began watching a video of a hearing in Valencia.

The case revolved around an employee injury. Working at a British glassmaking company, an electrician unplugged the wrong cord on a critical piece of equipment and accordingly received second and third degree electrical burns to the face, neck, and arms. The judge began with an arduous recitation of the facts—the employee sued the company for 100,000 English pounds. Angela represented the insurance company which covered the glass makers for damages over a certain amount.

We were watching a hearing from the past Tuesday (incidentally while we were in class). The incident had actually occurred in October 2002—every time that any party has a conflict, the trial was rescheduled.

One of the major differences between Spanish court and the States is that Spanish lawyers don’t generally sit near their clients. This particular Valencian judge was a fan of the American judicial system and offered the clients the opportunity to speak with their lawyers whenever they wished to do so.

By this point in the proceedings, the plaintiff’s condition had improved significantly, so the doctor’s original diagnosis was no longer valid. When the insurance investigator discovered this dramatic improvement, the company requested to have a new doctor examine the plaintiff. The judge denied Angela’s claim on the grounds that bothering a doctor before discovering the actual amount of compensatory damages. With this news, our slot for the day expired, and we went home.

Another week has me immersed in literature, random conversations, and delicious food. Coming up: my intercambio (language partner), more in the Spanish law firm, and preparations for my first Thanksgiving away from Indiana! 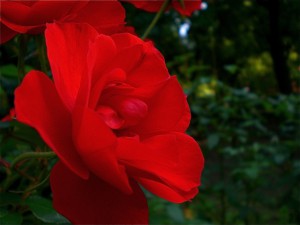