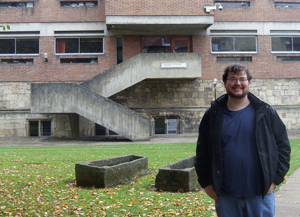 Markey in front of the Archaeology Department

Tim Markey ’12 – Orientation for students at the University of York has finally ended, and on Monday the academic adventure begins. Of course, I’ve already had quite an adventure getting here in the first place. It all started with the terror alert for Western Europe which came out the night before my flight to Heathrow. (Ironically, it was much bigger news in the US than over here, which didn’t exactly help to calm my family’s fears). Then once I arrived I discovered that just for that day, Oct. 4, the London Underground workers were striking. Or, as the cheerful announcers put it, “Underground service has been suspended due to ‘industrial action’.” Laden with both jetlag and all my baggage, I at last found the hotel I was staying at for my London orientation. Obviously, things weren’t off to the best start.

Thankfully, orientation went very well. I got to meet the other American students going to York, and the group of us had a great time in London. We took a tour of the city, seeing all the big sights like Westminster, Trafalgar Square, and Buckingham Palace, and we also enjoyed our first British pub experience. Soon we were off to York by train. I’d been to London before, so nothing there really surprised me, but York was completely different. In London, it’s not uncommon to see ancient castles right next to modern train tracks and telephone poles.  But in York, this juxtaposition is taken to the extreme. There are literally Subways and McDonald’s, new supermarkets and banks, in the bottom floors of shops which have been open continuously since as early as the 14th century.

The city is filled with medieval churches, fortifications, and of course the York Minster. Even the university’s Archaeology department is located in a building known as King’s Manor, which was built in the 15th century and later used by Henry VIII for his King’s Council. The most amazing thing is that this is where I’ll be taking some of my classes! 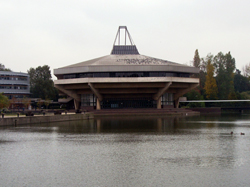 The Central Hall on York's campus

Of course, not all of the University was such a rich history. It’s only 50 years old and thus most of its buildings only date back to the sixties or seventies. Central Hall, which sits on the beautiful sight of a man-made lake, almost looks as if some sort of UFO landed on the sight and got stuck there. The students, too, are very modern. York is a much more liberal place than what I’m used to, and the diversity here is simply amazing. Forty percent of York students are of international origin. I spent my first day wandering around the city with one guy from Germany and one from China. We talked about how different York was to our hometowns and how we were going to have to adjust our study methods to fit this new system. (Also how British and American beers pale next to Germany’s and which of the 366 pubs in York were worth going to. Gotta love those Germans). I think this is going to be a very interesting semester.