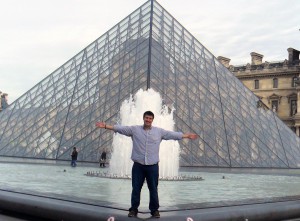 Visiting the Lourve in Paris

I can hardly believe it; I have been studying abroad for almost 2 months and yet it feels like I got here yesterday.  I live in a castle and study in it with roughly 130 other Americans including Terri Sullivan ’12.  Can you believe that literally a CASTLE! Remind you of Harry Potter anyone? The castle is called Harlaxton Manor and it is situated an hour train ride north of London in the rolling hills of the midlands in England.  The weather has been pretty spectacular so far and has not rained that much contrary to popular belief, however the tempatures rarely leave the 50s both as highs and lows.  However, after Indiana that is a nice change of pace.

Anyways everyone here takes a class called British Studies.  It is very similar to C&T except strictly on British history.  The class is taught by British faculty and is very informative and enjoyable.  Besides that I am enjoying my classes, which the teaching style is very similar to Wabash.  Besides that though it is great to meet new friends and experience different cultures by traveling.  For example every Wednesday night we go into the local town Grantham to a pub called The Goose to grab a pint for steak night it is quite enjoyable.  Also with being in close proximity to London I can travel there whenever I like for only 20 bucks round trip.  Got to love public transportation. 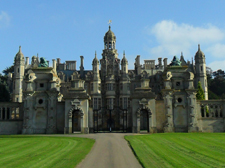 Our residence, the Harlaxton Manor

So far I have been to London, several other cities in England, Paris, and Scotland.   I loved these trips and I believe it is safe to say if I didn’t have to go back to Wabash I could stay here for another year.  Just getting to see things that were built over 500 years ago on a regular basis, or seeing famous paintings or landmarks that you have always seen on the TV or books is amazing.  To have all of this at your fingertips is completely awesome.

Finally I have a met a family here at Harlaxton, which is set up through the school.  There names are Michael and Margret Laws.  They are amazing people and I have had the great opportunity to meet their family. They will usually take me on a road trip every Saturday or Sunday to somewhere I would not have travelled to in England, and then they will cook dinner for me at their home.  It has been great to really get to see how English families differ from our own and understand culture and difference subtilities in language a bit more.

Overall there is too much to write about and not enough room or time.  I could go on for ages about my experiences so far including; the not so great food, how there is a pub on every corner, how friendly Scottish and some Parisians are, getting to go on field trips to ancient castles and cathedrals, or the fact I will get to travel to Spain, Greece, Netherlands, Wales and Belgium but I will save that for another day because I have to pack for Ireland where I am traveling with some friends with tomorrow.  Well ill update again soon and as they say in England.