My study abroad experience is, guaranteed, completely different than any other student’s. I am studying at Harlaxton College in Grantham, about ninety miles north of London. Harlaxton Manor is, essentially, a castle. Watch “The Haunting”. That’s where I’m staying. And, unlike any other student studying abroad this semester, save Steven Stankovich, I am not around British, Scotch, or Spanish people constantly; I am amongst a group of fellow Americans. The basis of the Harlaxton education is a course called “British Studies”. We are slowly working our way through the entirety of British History in just one semester.

Being around other Americans is familiar and safe, but at Harlaxton we are encouraged, more than anything, to travel. Every weekend is a three-day weekend just for this purpose. To date I have been to Newcastle, London (twice), Ireland, and Wales, and in the next five weeks I will be in Scotland, Amsterdam, and Paris. 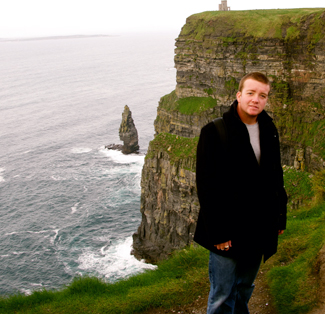 Sullivan is enjoying British Studies and the countryside

Despite being a wonderful country, England and Wales just weren’t as impressive as Ireland was. I, and a small band of students from Harlaxton went from Eastern England to Western Ireland in the matter of a day. That was a very long excursion. Tens of hours on a bus and ferry made me appreciate being short thanks to the little legroom. However, when we reached our destination, a small town called Doolin just north of the Cliffs of Moher, I was not too excited. The hostel was small; there were two pubs, and no ATM. My first thoughts were ones of regret. The town was a small coastal town known in Ireland for two things, the Cliffs of Moher and the traditional music.

Naturally, I decided, accompanied by a few friends, to visit the cliffs upon arrival. Not being much else to do, the decision was really made for us. The Cliffs of Moher are six hundred feet off the crashing Atlantic Ocean. They are the tallest Cliffs in Europe, but a simple description does not do them justice. A sign that denotes “Private Property” marks the end of walkways and tourism, but a worn footpath stretches nearly the entire length of the eight-kilometer Cliffs. Walking this footpath, at what feels like the end of the world, is truly awesome. The footpath, at any point, is no further than five to six feet away from the edge of the cliff, and like any day in Ireland, the day I saw the cliffs there were patches of rain. Proximity and slippery, muddy hills made for the most amount of fear I have ever experienced. The Cliffs, however, are not the only thing to see at the Cliffs. If you simply turn around you gaze across the Emerald Isle. I now understand why it is called the Emerald Isle. The array of green that you see looking across the land makes you wonder if it is even real. It looks like the Emerald City from “The Wizard of Oz”.

That night we decided to experience the second reason to visit Doolin. We went into one of the pubs and sat down. The Irish were openly accepting to us ignorant tourists. We made friends, listened to music (which was indeed reason alone to visit Doolin), and had a pint or two of Guinness.  The Irish are easier to understand than the British. They seem more open to tourists and sharing culture because the food, music, language, and spirit are their own. I’ve never met more genuinely happy people than I did in Ireland. The corned beef and cabbage melted my heart, and so we stayed one more night in the small town.

I find it much easier to cast off reputation of peoples much easier as I meet new nationalities. As I’ve seen so far, the Germans can laugh, the French are not rude, the Irish don’t fight, but the British do drink way too much tea.