Marc Parroquin ’12 – The most difficult thing about coming here is knowing that I will soon have to leave it behind. Buenos Aires has made me appreciate many things that I used to have while giving me an appreciation for what my life in Indiana previously lacked. While I really had absolutely no idea what Argentina held in store for me, I know I will never forget the great things I have experienced since arriving. 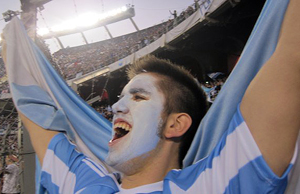 Marc Parroquin '12 gets into the Argentian spirit at a soccer game.

Almost immediately upon arrival, I felt a strong appreciation for my ties to Wabash. The first week I arrived, I met a Wabash grad (a former Delt named Chris Woodside) who, before leaving literally less than a week after I arrived, ensured a job for me with the Buenos Aires Pub Crawl, a tour of the local nightlife. This immediately plugged me into the social pipeline in Argentina and I have made a lot of great contacts from all over the world who come out for the crawl.

The nightlife in BsAs is absolutely amazing, with a bar and a club to suit anyone´s tastes. I have to admit going from the social life at Wabash to this one was more of a culture shock than the language barrier, and I am not in any hurry to leave it behind.

Another appreciation I now have for Wabash is the proximity and the conveniences that our campus provides for us. The education systems here are ridiculously disorganized. The UBA, the most prestigious of BsAs´s universities, where I am currently enrolled in a Marxist theory class and a social history of Argentina class, has over 300,000 students in all of its faculties. As such, the buildings are scattered over a huge city, with a public transport system that is shoddy at best, with strikes shutting down subte lines on a regular basis. The political involvement of the common citizen is taken very seriously here as well. The UBA itself has been subject to a strike for the past month, with professors taking to cafés to teach class because the administration has locked all the buildings.

Some highlights so far of this trip have been the Argentina vs. España futbol game, and this previous weekend, where I traveled to Córdoba, Argentina for an Oktoberfest and mountain climbing/hiking, and last night, where Incubus came to Buenos Aires. Going to an Argentine futbol game will probably be the most intense sporting event I will ever go to; The Sphinx Club needs to take note of whatever the hell it is Argentine´s do to get everyone so pumped up, because it is absolutely insane being inside the stadium, surrounded by such a passionate multitude of people. Though watching the World Cup champions get soundly defeated by Messi and company was a great experience, being outside the city this past weekend has been the highlight of my trip thus far.

An overnight bus ride away is Córdoba, where I visited Santa Rosa de Calamuchita, Villa General Belgrano, and La Cumbrecita. The beer variety in the city is severely lacking, and the Oktoberfest followed through on its promise of great brews, but the mountain trip to La Cumbrecita was easily the best part of the weekend. After climbing/hiking up a mountain, it takes you to an absolutely beautiful gorgeous waterfall, and nothing I have yet experienced even comes close to the tranquility of being enveloped by the waterfall and its surroundings. Finally, I had the opportunity to see Incubus for the first time ever, here in Buenos Aires, and as they are one of my favorite bands, it was an amazing addition to what would have already been a great weekend.

All in all, this country has been treating me very well, and while I definitely miss home, I am beginning to feel that I may miss this place more upon returning. Everything you could possibly ever want as a 20-something year old, single guy, or in other words, every student at Wabash, is here, and I only wish I could do more to share it than just write a blog.

I have taken quite a few pictures of my travels here thus far, and if you would like to see them, just add me on facebook.