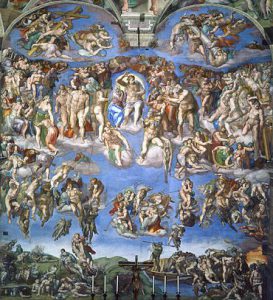 Painting from the Sistine Chapel

During my time abroad, I have had the opportunity to see absurdly beautiful architecture and art, such as Gaudi’s Casa Batlló, the Seville Cathedral, and The School of Athens by Raphael. Among all the works I have seen this semester, the most profound work I have seen are the paintings within the Sistine Chapel, especially The Last Judgement.

The sheer scale of the Michelangelo’s paintings within the Sistine Chapel was outstanding. Although you can always find pictures of the Internet of “The Fall of Man” or The Last Judgment, it is almost impossible to appreciate the intricate details that are present within all the works within the Sistine Chapel. My personal favorite hidden gem within the Sistine Chapel is in The Last Judgment. During the tour, our guide pointed out the bottom right corner of this fresco, where the damned are depicted descending into hell. As Michelangelo was working on The Last Judgment”, the pope’s Master of Ceremonies stated that it was “most disgraceful that in so sacred a place there should have been depicted all those nude figures, exposing themselves so shamefully,” and that it was “no work for a papal chapel but rather for the public baths and taverns.” Because of this, Michelangelo painted the Master of Ceremonies face on Minos, the judge of the dead in the underworld in Greek Mythology, with donkey ears, emphasizing the foolishness of the Master of Ceremonies. Of course, the Master of Ceremonies objected to the pope at the time, Pope III, but the Pope told him “God has given me a certain degree of authority in Heaven and on earth, but it does not extend to hell.” As we continued our tour into St. Peter’s Basilica, I could not get this story out of my mind. Although you hear all the time how much larger than life the artists such as Michelangelo were during this time period, the fact that Michelangelo was able to paint in the Vatican a high level religious leader at the time as a devil-like figure without any repercussions gave me a perspective as to how prominent of a figure he was during this time.